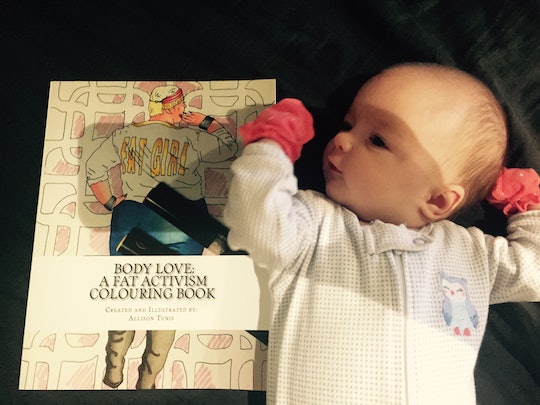 The first time I colored in an image of a fat body was in 2016. I was 25 years old and I'd just been given a copy of Allison Tunis' Body Love: A Fat Activism Colouring Book. Let that sink in for a minute: I was a fully-fledged adult the first time I colored in a picture of a fat (or even just not-thin) human. Prior to this moment, my coloring books had celebrated Disney princesses and their lookalikes; Barbies and their Kens. Those were the images my young self spent time filling in. Those were the images I'd been told reflected beauty and worth. But those images sure as hell didn't look like me.

My 7-week-old daughter is far from being able to color. But as I look at her, I cannot help but wish for more. I have no way of knowing how her body will grow and evolve through time. Maybe she'll take after me. She could have a muffin top by age 5. Or maybe she'll take after her dad: lanky and small-boned. Maybe she'll end up somewhere in between us both. It doesn't matter; not really. I just want her to know that every body is worthy of tolerance; that every body possesses its own unique and subjective beauty; that "beauty," in and of itself, is impossible to define — our individual perceptions governing our interpretation of it, even if the mainstream media tries to prescribe one definition. And that's precisely why I'll introduce her to body positive and fat positive coloring books as soon as she's old enough to pick up a Crayola pencil.

I'm perfectly willing to accept that a big reason coloring books featuring diverse body types didn't enter my life until 2016 is because they didn't really exist when I was a kid. There was no Fat Ladies in Spaaaaace: A Body-Positive Coloring Book. There was no Body Love: A Fat Activism Colouring Book; no printable coloring pages featuring fat women of color, differently-abled fat women, or queer and fat humans by Rachele Cateyes; no Big Bellied Merbabes by Rachelle Abellar. Fat activists existed, beyond a doubt (shoutout to Marilyn Wann). But fat coloring books? Not so much. So even if my parents or relatives had been mindful enough to think of the consequences of repeated exposure to imagery that did not represent me, there was little they could've done about it when it comes to this category.

With every visible belly outline, jiggly thigh, or double chin I penciled in, I could feel the day's anxiety becoming a distant memory. But more importantly, perhaps, I could feel myself growing more and more empowered; fueled by the reminder that my fat body was good. That it was beautiful, sure, but that it also possesses the ability to take me to the places I want to go, do the things I want to do, and travel where I want to travel.

Fast forward to 2017, however, and there's arguably more awareness of the importance of radical body politics than ever before. We also know that coloring has the power to reduce anxiety and help one de-stress. Psychologist Gloria Martinez Ayala explained to the Huffington Post that coloring "involves both logic, by which we color forms, and creativity, when mixing and matching colors. This incorporates the areas of the cerebral cortex involved in vision and fine motor skills [coordination necessary to make small, precise movements]." As adults, the practice can even help bring "out our imagination" and take "us back to our childhood, a period in which we most certainly had a lot less stress."

This, I can attest to. When Body Love arrived at my door, I felt the impulse to begin coloring immediately. With every visible belly outline, jiggly thigh, or double chin I penciled in, I could feel the day's anxiety becoming a distant memory. But more importantly, perhaps, I could feel myself growing more and more empowered; fueled by the reminder that my fat body was good. That it was beautiful, sure, but that it also possesses the ability to take me to the places I want to go, do the things I want to do, and travel where I want to travel. It reminded me of my worth, in a world that still stigmatizes and oppresses fat people to such degrees that we risk increased likelihoods of conviction, lack of proper medical care, impacted earning potential, and all around erasure in visibility, representation, and general tolerance.

I know that my daughter will grow up in an era during which all of this is still true. If she's ever fat herself, she'll likely feel the prejudice directly via playground bullies or teachers or fat jokes on children's television shows. If she's not fat, she'll still be taught to treat the word as an insult — as a synonym for "unhealthy," "unattractive," "undisciplined," "unworthy." While I hope that representation of visibly fat bodies in television, film, and media increases by the time she's old enough to operate a remote control or touch screen, I have my doubts. So all I can do is help curate an alternative narrative.

A lot of my time is spent thinking about how I can raise a fat positive and body positive child. I already have artwork all around the house that displays fat bodies. I utilize the word "fat" as a neutral descriptor, if not a positive one, when referencing myself and other empowered fatties. I do not frame health as a beauty standard, nor do I accept that something is "healthy" or "unhealthy" without doing some serious research into it and analyzing the source of the information. But perhaps more entertaining for my kid will be her introduction to fat/body positive coloring books. Through an activity that she'll hopefully enjoy, she'll spend some time with images of bodies she still won't be seeing much of on the TV or in the magazine. And as a result, I believe they'll become normalized for her.

That normalization, I believe, is key. Aspirational beauty tropes permeate everything, after all. They permeate everything so much that most of us form a box of acceptability. In that box resides the "perfect" body. It is usually thin, it's usually fair-skinned, it usually has Eurocentric facial features, it's usually able-bodied. And even if we don't intend to internalize this stuff or place bodies on a hierarchy of sorts, we often do anyway. This then affects our self-perception and our perceptions of those around us.

What I want for my daughter (and what I would want for any child, regardless of their gender identity) is an existence that is not defined by the body. I want my Luna to understand that happiness is attainable at any size. I want her to understand that self-love is as well. And I want her to know that her tolerance should extend to every person. It'll probably take a lot more than a coloring book. But something tells me that the coloring book will definitely help.