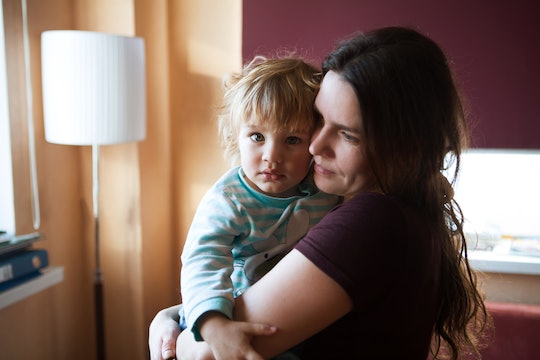 My Endless Anxiety Is Proof Our Definition Of "Postpartum" Is B.S.

I used to be cool as hell. Super carefree. I would pack up my things at a moment’s notice and head out into the great unknown. I wasn't a worrier; the YOLO ran deep. That all ended with the conception and birth of my baby. Becoming a mother turned me into a crazy woman. Two and a half years later, I'm no longer postpartum, but I'm still anxious.

My pregnancy was fraught with worry about the aspects of the carrying a precious child and then of course the delivery. I was scared I would die during the months leading up to my due date. I was scared I would die during delivery. I was scared that everything I did during those months he was growing inside me would hurt him. Then I didn't die. He arrived safe, bundled and sweet. That's when my anxiety got roughly four hundred times worse. I totally lost my calm and my cool — and I haven't gotten it back.

The term "postpartum" has no solid timeframe built in. It is defined, both in medical terminology and outside of, simply as "the period following childbirth." Though I think, as a society, we speak of the postpartum period as a year or so following the birth of a child. It is the timeframe we consider in which it still feels like the door to a new world is opening — the door to becoming a full-fledged, initiated mother.

However, the cousin of postpartum anxiety, postpartum depression, is often spoken as a state that lasts immediately following the birth of a child up to three years after the birth. I suppose if these feelings last longer than that, they just drop the "postpartum" and diagnose someone as anxious or depressed — like, at that point, are we simply suffering life?

During my son's first year, I was a wreck. I can look back at pictures to see that it was a beautiful time, but while I was standing in the midst of it, I felt little more than fear. The first year it was fear that he would die in his sleep every night.

The second year it was fear that he would choke on every object in sight.

We're in the third year now, and now my fears are focused on how society views him. I want him to be quiet and nice and polite. I want to make sure they will see him how I want them to see me.

My anxiety is bundled up with the bursting life of my son. He means so much to me that monitoring his existence causes me great grief. But I have learned tools along the way, and I try to put them to use. Pause, breathe, think about the actual gravity of any situation.

We talk about postpartum mood disorders as though they age out when our kids sleep through the night, or start eating solids, but a more open conversation about postpartum anxiety and depression is proving that parents suffer well past the first birthday, or even the third birthday. Parenthood cleaves us open, allows us to feel deeper, stronger emotions than we've felt before, but can also seem like a gaping wound. Since the birth of my son, there's a rawness there, and the stinging hasn't really dulled.

In the moments following birth, you feel relief, love, and yes, hunger for a good sandwich. You've been through something massive, and the staff are set about making sure you're stitched up, that your uterus muscles its way back down to the size of a small pear. Beyond those obvious cues, I'm not sure we're doing enough to support the women who feel a chronic shift, who are still blowing in the wind three years later. I'd like us to talk about how the good mom — who frets about her child — can also be a mom who is suffering.