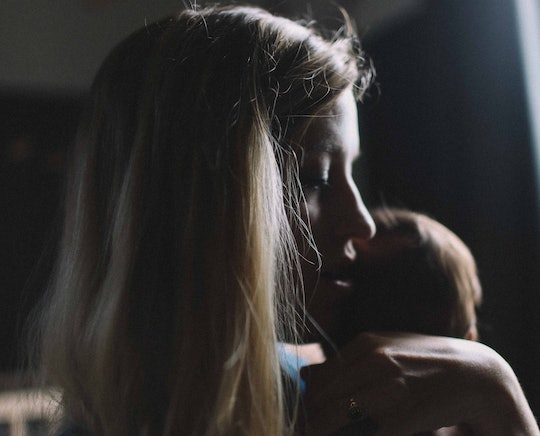 Photo by Jenna Norman on Unsplash

Postpartum Anxiety Isn't New, So Why Don't We Talk About It?

What happens when maternal instinct goes into overdrive? After the birth of her first daughter at 32, Patricia Tomasi, was plagued by unwanted thoughts and fears. Horrible scenarios would play out in her head of things like her new baby falling down the stairs. She didn’t want to think about these scenarios, but they popped into her mind, day and night.

“I was thinking, ‘where the heck is that coming from?’ I would get heart palpitations, I couldn’t sleep. I was extremely weepy and angry,” she told Romper over the phone. She wasn’t depressed, but she wasn’t happy, either.

Eventually, she emailed her fellow mom friends and asked if they had similar experiences.

But Tomasi’s experiences weren’t normal. They were interfering with her life, making it difficult for her to take care of her baby and enjoy motherhood. She had postpartum anxiety, not technically a disorder unto itself, but a group of symptoms that can be features of postpartum depression, obsessive-compulsive disorder, and panic disorder. All of these are part of a family of mood-related symptoms that occur before and after birth called perinatal mood disorder.

Now 40, Tomasi said it was difficult for her to get treatment the first time because her symptoms made her feel like a failure, like she was simply not built to handle motherhood. But eventually, her symptoms simply became unbearable. She called a nurse hotline, which ran her through the Edinburgh Postnatal Depression Scale, a series of questions designed to detect postpartum depression, which includes anxiety. Though she was diagnosed with postpartum depression, she still did not take medication and continued to struggle with depression for three years.

"The second time around, everything, every corner of my life was perfect. And not only did it still happen, but it was worse. That was when I was really like, ‘I have no control over it, it’s not my fault.’”

Once she became pregnant with her second child, the depression dissipated, which she attributed to the hormone shift during pregnancy. But after her second child was born, her mood dropped once more. But this time, it was easier to recognize her problem was a medical condition, and not some personal failure.

“The first time around I was like, well I was a new mom, I had an awful labor, my husband and I were fighting all the time, maybe I needed to grow up,” Tomasi says. “But the second time around, everything, every corner of my life was perfect. And not only did it still happen, but it was worse. That was when I was really like, ‘I have no control over it, it’s not my fault.’”

After non-pharmacological treatments like yoga and meditation failed, she eventually started on Effexor (venlafaxine), a selective serotonin and norepinephrine reuptake inhibitor.

“And I finally took the first pill, and I don’t know if it was placebo, but after an hour I already started to feel better,” Tomasi says. “I know it takes four to six weeks, and I did feel the gradual buildup, but by eight weeks, I felt the most calm and most myself I ever had in my entire life. And I said, ‘Wow, is this how people feel on a day-to-day basis?’”

Postpartum anxiety ... tends to strike in the first six weeks after the baby is born, and most of the worries and panic attacks revolve around motherhood.

Anxiety symptoms after giving birth are common, though actual estimates vary. According to Postpartum Support International, approximately 6 percent of pregnant women and 10 percent of postpartum women have anxiety, with or without depressive symptoms. Another study found that as many as 13 percent of all mothers experience some level of postpartum anxiety.

Severe anxiety can be especially debilitating due to intrusive thoughts.

That is also why it may be hard for women, their family, and their healthcare providers to sometimes recognize when a new mom is in need of help, says nurse midwife Ann Smith, president of Postpartum Support International. Many moms experience mild symptoms, sometimes called postpartum adjustment disorder. This is characterized by feeling overwhelming or excessive concerns about the baby.

But as postpartum anxiety becomes more severe, it becomes more debilitating. No one is quite sure what the cause is, but it likely has to do with a combination of the hormonal changes that occur after pregnancy, as well as situational factors like lack of sleep or a troubled relationship with family or a partner. Several factors are also associated with more severe symptoms. Women are more likely to suffer from a perinatal mood disorder if they’ve had one before, if their mother or sisters have had it, or if they experienced a mood disorder before becoming pregnant.

Severe anxiety can be especially debilitating due to intrusive thoughts, which can be features of other disorders like postpartum obsessive compulsive disorder or postpartum psychosis.

And these thoughts may be so severe that they cause her to change her behavior, though she is extremely unlikely to act out the thoughts. She may hide the knives because she’s worried about dropping one and hurting herself or the baby. Or she may avoid the stairs in her home because she’s worried about falling down. At this point, she may be considered to have postpartum obsessive compulsive disorder.

“I think both depression and anxiety ten years ago [were] not something we talked a lot about, despite being [some] of the most common complications of the perinatal period,” says Dr. Tiffany Moore Simas, an OB-GYN at University of Massachusetts Memorial Healthcare. “Now I think there’s a much greater awareness.”

She and Smith agree that a growing awareness may account for what may seem like a rise in the number of women suffering from postpartum anxiety. In other words, it’s not that more women are have it than before, but more of them are getting diagnosed and treated, instead of just suffering through it.

There are also several treatment options available, and most of them don’t involve medication. Moore Simas says even just taking a little time for self-care and allowing others to help can go a long way for women whose symptoms are mild.

Talk therapy and group therapy can also help. Cognitive behavioral therapy (CBT), which re-trains how we approach negative thoughts, can be particularly effective.

Most medications, when prescribed by a doctor, are also extremely helpful and safe — even if you’re breastfeeding. With the exception of a few antidepressants, like Celexa (citalopram), most drugs will not harm mom or baby.

“No medication, no matter what is, has zero risk. But these medications have been well-studied, they are overall considered safe,” Moore Simas says. “But what a lot of women don’t appreciate is that untreated anxiety in and of itself comes with risk for mom and baby.”

She explains that bonding with the baby is critical to its cognitive development. If anxieties are getting in the way of that bonding, she says, then that’s a sign that help is needed.

“I’d wake up in the middle of the night, had a scary symptom, and I’d go right away to my Facebook group."

Of course, getting help isn’t always easy. Whether or not screening and treatment is covered by insurance varies by state and insurance providers. Thankfully, a recent ruling determined screenings can be covered for both Medicaid-eligible and non-Medicaid-eligible moms, though treatment may not be covered. And for moms not covered by the Affordable Care Act’s Medicaid expansion, Postpartum Support International is committed to helping women find treatment that they can afford.

Perhaps the most important thing for anyone with postpartum anxiety, or any other perinatal mood disorder, to know is that you’re not alone. Patricia Tomasi started up a Facebook group, the Postpartum Depression and Anxiety Support Group, as a way for herself and anyone else suffering to express their difficulties and find support through shared experiences.

“The thing that provided the most support for me was talking to people who knew exactly what i was going through,” Tomasi says. “I’d wake up in the middle of the night, had a scary symptom, and I’d go right away to my Facebook group or other Facebook groups.”

"If your family doctor is not taking you seriously, go see a different doctor until someone listens to you and gives you the help you need,” Tomasi said.

Tomasi said she encourages any woman who is experiencing anxiety symptoms to seek help, first from their doctor, but also from their friends and family.