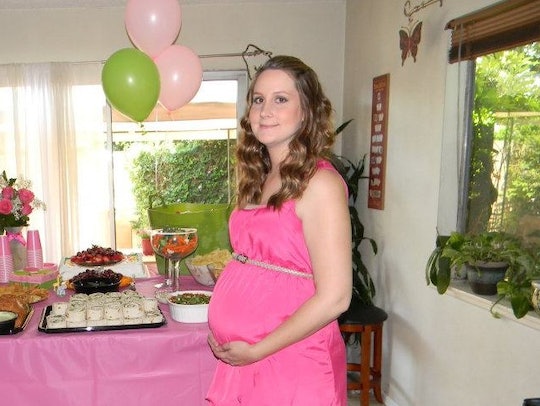 My Epidural Felt Amazing, & I Would Do It Again

I recently watched a viral video of a childbirth educator using a pink balloon and ping pong ball to demonstrate how a woman's cervix thins and dilates during labor. The woman blew up the balloon with the ping pong ball in it and then proceeded to slowly push on the balloon until eventually the ping pong popped out. It was terrifying. That's why I am thankful for my epidural, which felt like almost nothing, but saved me from unimaginable pain. It was a lifesaver.

When I was pregnant, there was no doubt in my mind that I would have a medicated birth. Thinking of something big coming out of a small area and the excruciating pain I would feel made my heart race and my body drip in sweat.

Everyone tolerates pain differently. Some women give birth and have an orgasmic experience.

That was definitely not me.

And I'm not alone when it comes to wanting an epidural. Seventy-one percent of pregnant women opt for an epidural or other spinal anesthesia, according to a Stanford study.

I have an extremely low tolerance to pain. When I was 18 and got my nose pierced, I had the employee at the shop spray numbing solution on my nose because I could not bear the thought of the few seconds of pain I would feel when the needle went through my nostril.

When I was pregnant, I knew it wouldn't feel like nothing.

I also hate getting shots or my blood drawn, and basically anything involving getting poked with a needle. I handle it better now because I don't want my daughter to have the same type of fear of pain.

When my daughter has to get a shot, I smile and tell her she'll feel nothing although I know it will feel like she got socked in the arm in a few hours.

When I was pregnant, I knew it wouldn't feel like nothing.

The happiness and joy from being pregnant soon wore off when I got into discussions with my family and doctor about the process of giving birth.

My curiosity got the best of my halfway during my pregnancy. I knew I wanted an epidural, but I wanted to know what exactly I would be experiencing. How does that big needle go in my back? What are the side effects? Will I get numb immediately?

I looked up YouTube videos of the epidural process. I cringed as I saw an enormous needle poking into someone's back.

And then any birth plans I had went out the window when my daughter surprised us all and I went into labor at 34 weeks.

My water hadn't broken but my stomach felt uneasy and I wasn't sure if it was a contraction or what I ate the night before. To be cautious, my husband and I rushed to the hospital. What was supposed to be a restful Saturday night turned into the weekend where I would expect the unexpected.

As I settled into my room at the hospital, I felt fine. I was surprised. I envisioned me sweating and screaming bloody murder. I thought my husband would be passed out in the chair next to my bed.

Instead, I laid in the bed and watched TV. My husband stood by my side and I could tell was nervous but hiding it well.

On a pain scale of one to 10, I was at about a 3. I was uncomfortable and a little nauseous but I took it as nerves. The anesthesiologist came into my room and asked if I wanted an epidural. I told him I knew I wanted one but since I wasn't in pain yet I said I would wait. He asked if I was sure and I confidently replied yes.

Shortly after, when my water suddenly broke, the nurses rushed in and made sure I was okay. I still was not in a lot of pain. I anticipated feeling pain in my stomach but my back was hurting. At times, the pain was intense and I felt a burning sensation. I asked my husband to rub my lower back harder and he said he was doing it as hard as he could.

I was ready for my epidural.

As luck would have it, the anesthesiologist was unavailable as he was assisting with a c-section. There was no one else who could give me the epidural.

The anesthesiologist showed up and appeared to have a glow around him.

At this point, I was a mess. I was unaware of my surroundings, focused with all my being on the burning sharp pain in my lower back. I was nauseous and already felt like giving up.

After what felt like an eternity passed, the anesthesiologist showed up and appeared to have a glow around him. He was my guardian angel sent to rescue me.

I was hurried into a separate room for the epidural. My husband was not with me and I didn't care. I just wanted relief. The nurse told me to hug a pillow but, being disoriented, I hugged her instead.

I don't remember feeling pain from the epidural needle since my lower back felt like a raging fire. I was told to be as still as possible and breath, which was difficult since I was in labor.

The procedure was quick and after about 10 minutes I started to feel less pain. I told the nurse and my family it was the most amazing thing. I could finally start to relax.