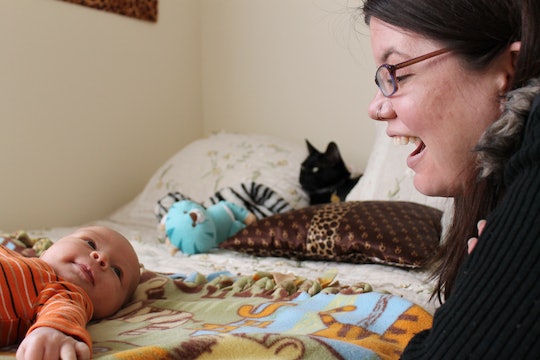 My job has always been an important part of my identity. OK, maybe not my first job as a teen working the concession stand at a movie theater, but everything that came after. Even while shoveling popcorn, I was committed to offering great customer service and a smile. When I got pregnant with my first child, quitting my job to be a stay-at-home mom wasn't an option on the table. We needed the money, and I wanted the satisfaction of using my skills outside the home and to contribute to society through working. I literally worked until the baby popped out and took the minimum maternity leave. For my second baby, however, I received some important advice from friends to take an extended maternity leave and enjoy some extra time with my baby. And honestly, it was the best advice I got from my friends.

More Like This
The 21 Most Popular Baby Names In 2021 (So Far)
Can You Sunbathe During Pregnancy?
30 Fun Father's Day Gifts For A Dad-To-Be
20 Sweet Ways To Announce Your Pregnancy On Father's Day

With my first pregnancy, I took the 12 weeks for which I could receive pay under California state law, and not a day more. I didn't realize that I could receive additional paid leave for time needed to rest and prepare before the baby was born. Under state law, I was entitled to up to four weeks of disability leave before the birth of my baby as needed, according to the State of California Employment Development Department.

Before I fully understood state law during my first pregnancy, I was working as a newspaper reporter. I planned to work until the day my son was due. However, my son was due on a Friday and I typically worked Tuesday through Saturday, so I decided to continue working until the day after my due date. I wanted to save every day of my 12-week leave for after my baby was born.

Pregnancy and parenting a newborn are hard enough without having to try to navigate complicated state and federal maternity leave laws, but that's exactly what I was doing, and badly. By the last few weeks of my pregnancy, even walking was uncomfortable, with the baby weighing heavy on my bladder and my muscles aching. Still, I trudged out out to crime scenes to report on them, and up and down the courthouse stairs to cover trials for the newspaper. I received a lot of questions and comments.

"You must be due any day now."

It was just too soon to be away from my baby.

Somehow, I made it through my last day of work without going into labor. As if my body knew it needed to hold on just long enough, I went into labor in the early morning Sunday, just hours after I finished my last work shift.

The 12 weeks of maternity leave after my son's birth came and went quickly, but I was grateful that I had that much time home with my son. I knew of many new moms who worked and only received six weeks of disability pay as they didn't qualify for Paid Family Leave or another paid leave program. Therefore, some of these parents could only afford to take a six-week leave. Others couldn't even afford the partial pay, and returned to work a week after birth.

I was able to take 12 weeks of leave because of disability leave after the birth, followed by the six weeks of Paid Family Leave, which I qualified for as someone with a job who was contributing to State Disability Insurance. When I returned to work, I did little more at first then stare at the album of baby photos I brought as my eyes welled with tears. It was just too soon to be away from my baby.

Pregnant for a second time, I initially planned to take 12 weeks again. However, a few conversations with friends and coworkers changed my mind. One coworker at my same company who'd recently given birth took a full four months, including some time before her baby was born. I was intrigued. I'd heard of similar experiences from other friends inside and outside the office. You'll never get this time with your baby back again, they'd say.

When my work supervisor asked when I wanted to begin my maternity leave and how long I'd be taking, I was anxious to say I wanted to start two weeks before my due date and four months after the baby's birth. She seemed surprised, but OK with it. She had no choice but to accept my decisions, legally anyway. That's because she was required to hold my job for me, or something comparable, during my leave due to the Family and Medical Leave Act.

The extra maternity leave time was especially important since I was splitting my time off between my two kids.

At eight-and-half months of pregnancy, I was more than ready to take some time off work and enjoy some rare alone time. At the advice of my friends, I didn't feel guilty about keeping my son in preschool for those couple of weeks and sitting home catching up on crappy daytime TV while I washed and folded baby laundry. I was resting and relaxing, and my body and mind needed the break.

My daughter was born a couple of days before her due date, and during labor I was able to pay attention to my early contractions that lasted several days, timing them and monitoring them closely. After my daughter was born, I didn't feel as rushed as I had with my son when the days and weeks flew by and were jam-packed with visitors. Instead, I took my daughter to the park and the store in the front carrier. I let my eyes linger over her sweet little baby features and made time for snuggles whenever possible. The extra maternity leave time was especially important since I was splitting my time off between my two kids.

The last month of my leave was unpaid, but my husband and I saved money beforehand in preparation. In the end, I felt the few weeks of unpaid leave were well worth the money lost because of the extra baby-bonding time and moments to myself before birth. Once again, we were fortunate that we had the means to support ourselves without my income for a short time. And after I'd gone back to work after both babies were born, my husband took several weeks of paternity leave so that he had time alone with the babies as well.

My friends had been right. I wouldn't be able to get back this fleeting time with the babies once it was gone. They're little once, and for such a short time. My job could wait, and thankfully, it did. My boss didn't give me any grief about my leave, and I was able to pick up where I left off after a short catch-up period. Fortunately, my boss has young children of her own, so she was fairly understanding as I got back in the swing of work.

Returning to work, I was refreshed and fully healed. I had a solid breastfeeding routine down, and was ready for adult interaction and the challenges of the workplace. Thanks to some great advice from friends, I was able to find a work/life balance that worked. Without their advice, I would have probably taken another less-than-adequate maternity leave, not fully understanding state and federal leave law and stressing out about my job.

All said, I wouldn't trade a day of the chubby baby snuggles that came with my extended maternity leave.