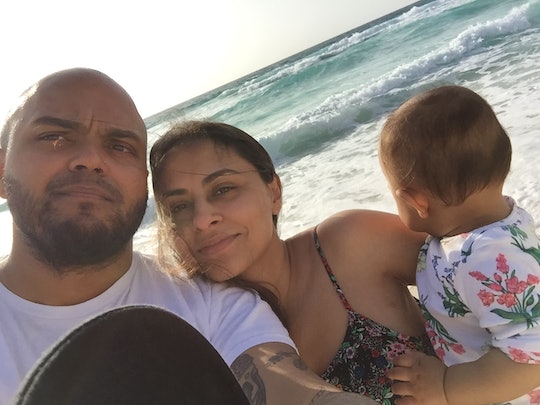 My Husband Had Postnatal Depression, & I'm Pissed It Was Overlooked

It's fun to joke about men having "sympathy pains" during pregnancy, but my husband's postnatal depression was real, and shattering. In the haze of those early postpartum weeks, it's hard to know what is just the shock of parenthood and what is an actual problem you need to address. Coming to terms with my own postpartum depression (PPD) was difficult, but my husband's invisible struggles were even more tricky to identify and treat. Childbirth can be exhausting under the best circumstances, let alone when you and your partner are both suffering forms of depression.

In recent years, the stigma associated with postpartum depression has decreased somewhat, and awareness has grown among women. PPD was isolating for me, but my doctor was primed to detect and treat it, and there was lots of support available once the disorder was diagnosed. But paternal postnatal depression (PND) is also a phenomenon that can affect your family's wellbeing, and is often overlooked. The National Childbirth Trust in the UK estimates that 1 in 3 new fathers are concerned about their mental health, while Scientific American found a link between low testosterone levels and PND. Dads are usually expected to pick up the slack when their partner is nursing around the clock, but the transition to being a father can wallop them as well as their partner. Further, the person who may be their key emotional support — their wife — is suddenly focused on a small baby. My husband went from being a gung-ho dad to a withdrawn partner who had difficulty finding joy in his days; his story is more common than you might think.

Becoming a father is a life-altering event. At first my husband was running off of adrenaline, as he put it. He was super-dad. Diaper changing, feedings, soothing our daughter — he did it all as I recovered from a c-section. He was so good at taking care of our daughter that I never suspected he was having a hard time. In honesty, he seemed to be handling parenthood in general way better than I was. Sure, I knew he was sleep deprived, but I didn't know that we were both suffering from PND. After about six months, it seemed like my husband hit a wall. He gained almost 30 pounds and was constantly unhappy, and we were just not getting along.

My husband was in denial for a year and, even after he finally admitted to having PND, felt ashamed to seek professional help, because in our society dads are supposed to be strong and tough.

The entire time I was managing my PPD, I had no idea that he could be suffering from PND, too. As my husband put it, "At first, I had no idea I was even depressed. I was convinced it was just sleep deprivation. But as you learned more about the symptoms of your PPD, I realized I was experiencing most of the symptoms that you were."

My husband went on to explain that he felt isolated because no one ever asked if he was okay, though they often asked him about me and the baby. He felt as though he had to "tough it out" and not complain. He didn't feel like himself because he no longer had time to exercise, eat healthy, or do anything for himself. He felt like he lost his identity. He was emotional, anxious, and felt withdrawn. He was overwhelmed with visitors, unsolicited advice, and juggling doctor's appointments for me and the baby.

My husband didn't have a moment to himself. He was always worrying about being the perfect dad, and felt a deep well of guilt when things just didn't work out the way he had thought it would, like sleep training. He felt terrible that he wasn't enjoying every moment of being a dad. As he explained his feelings to me, I came to the realization that he was feeling everything I was, all of which my doctors had diagnosed as symptoms of PPD.

But I had no idea what to do. There's very little information out there about PND for men, and few men speak about it or come forward with their stories.

You probably had to fill out a little mental-health form at some of your newborn's well visits, and you went back to your OB-GYN at the six-week mark, when your doctor should again have screened carefully for postpartum mood disorders. But there is no form men fill out after having a baby. From memory, they're asked to prove they know how to operate a carseat, but doctors don't typically ask fathers if they're experiencing depression or anxiety after becoming parents. No one checks for symptoms of PND.

I think most dads, including my husband, feel like they have no right to feel this way or to even suggest that they may have PPD, because they didn't endure pregnancy and childbirth. Women often think men have it easier — that at the very least they don't experience the changes we do during pregnancy and postpartum. And there is definitely some truth to that, but men have every right to get support for PND.

Becoming a parent is beautiful, but it's also an emotional rollercoaster. Untreated depression is dangerous and devastating to deal with on your own. My husband was in denial for a year and, even after he finally admitted to having PND, felt ashamed to seek professional help, because in our society dads are supposed to be strong and tough. They're told they have it "easy" and therefore should not complain. But, I know now that is simply not the case, and if any overwhelmed dad is reading this, your feelings are valid and I hope you seek help.

My husband eventually tried medication but it didn't agree with him, or relieve his symptoms. He had to learn to talk about his concerns and to ask for help when he felt overwhelmed. He also had to practice self-care, as mothers are often reminded to do. PND isn't something that just goes away on its own and every day he has to be aware of it.

Today, things are improving, and its getting easier for both of us to soak up the bright light that is our daughter. If we each feel the struggle from time to time, the difference now is we know we are in this together.

If you are struggling with suicidal thoughts, know that you are not alone, you matter, and there is help. The National Suicide Prevention Lifeline provides free and confidential support 24/7.