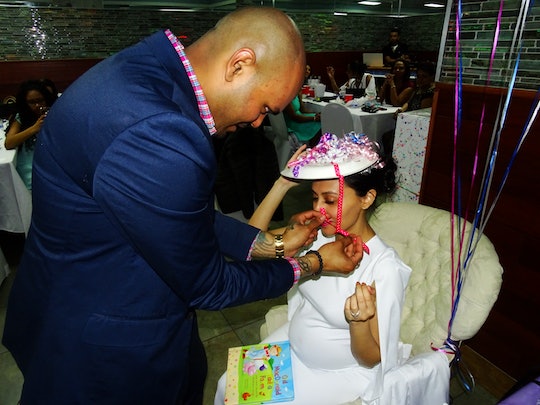 I Wanted To Have Lots Of Pregnancy Sex. My Husband Felt Differently.

The bump isn't what gets in the way when you're trying to have sex pregnant. You can try all the positions you like (such as: lazy sideways woman), but all the Kama Sutra in the world won't help if your husband doesn't want sex during pregnancy. When I found out I was expecting, I figured we would have to be gentler when getting busy, and I expected that as my belly grew we'd have to try different positions to accommodate these changes. As long as I wasn't in any pain and the baby wasn't in any danger, I expected to have a normal (but slightly adjusted) sex life during my pregnancy. Little did I know my husband and I would be on completely different pages.

If the swollen ankles and difficulty climbing stairs have an upside during pregnancy, it's in the increased flow of blood to your vulva. And the hormones might drive you a bit bananas, but they can also spark a sort of last-hurrah of love-making. That is, if your partner is into it. Your libido can also go the opposite direction: finding yourself in a new body, constantly crying out for coffee and being given dirty vanilla de-caf can be the death knell for sexual desire. I'm so empathetic to anyone going through the multitude of pregnancy-related changes: I think you should do whatever makes you feel good! For me, that thing was having sex. The one thing my husband didn't want to do.

During my first trimester, things were kind of scary. I had unexplained bleeding, which was even more terrifying because my PCOS which means I'm at a higher risk for a miscarriage. Between the bleeding and the PCOS, my husband and I refrained from sex for a little while. Eventually the bleeding stopped and my doctor gave me the green light to return to normal activities including sex. "It'll be good for you. It'll help you relax," my doctor assured me during a visit as I nervously asked a million and one questions about safe sex during pregnancy. I even brought my husband along, so my doctor could ease his fears as well.

We had never experienced such mismatched libidos, and it was awful. I was already emotional, so being a sexually frustrated, wobbling, hormonal mess made me feel super lonely.

We began to have sex again but it wasn't as often as before. Soon after, the baby began to move and kick, and I think that's when it became real to my husband. Though we knew there was a baby growing inside of me, it's a whole different experience when you can feel and see movement. Sex became less frequent, but we were still having sex, so I didn't think much of it. As my belly grew, somewhere around five or six months in, my husband didn't seem comfortable having sex anymore. He said it felt strange to have sex, knowing the baby was "right there." He also worried that sex would cause a miscarriage or cause me to go into labor early, none of which was a concern my doctor had. He was a nervous wreck. Again, my doctor reassured us that sex was safe, but this time it didn't ease my husband's fears.

At first, I shrugged it off. I was so busy with doctor appointments, decorating the nursery, and shopping for tiny hats that at first I don't think I noticed us having less sex, or no sex. But out of nowhere my sex drive skyrocketed. I was surfing a wave of pregnancy hormones, and in the mood more often than ever before. For the first time, I was the one most often initiating sex. But it was awkward. My growing belly kept getting in the way and my husband was more concerned about the baby than us having enjoyable sex.

By now, I wanted sex way more than my husband, and was willing to do or try anything to make things work. I suggested different positions, and kept trying to reassure him that everything would be fine and that sex was safe, but I couldn't convince him. I felt guilty for harassing him for sex, but I couldn't help that my body was in go-mode.

Everything reminded me of sex. As the days turned into weeks, I become very, very frustrated. It didn't help that my doctor casually mentioned that I should "enjoy sex as much as I could before a crying baby interrupted us." I felt pressure to have as much as as we could while we still had the time. I managed to convince my husband to have sex with me a few times during my last trimester, but it was very few and far in between. We had never experienced such mismatched libidos, and it was awful. I was already emotional, so being a sexually frustrated, wobbling, hormonal mess made me feel super lonely. I hated that we couldn't connect.

When we were trying to conceive, sex was robotic and not very fun, because we were having trouble. Now that I was pregnant and everything was fine, I really wanted to make up for lost time. I finally had my sex drive back, so to be rejected wasn't easy for me.

Yes, there is sex after children. But our unsynchronized sexual routine through my pregnancy taught me a lot about give and take in a relationship. It's strange to feel that sex got you into a situation, but can't get you out. Having maneuvered our way through one pregnancy, we are committed to not letting a bump get in the way again.