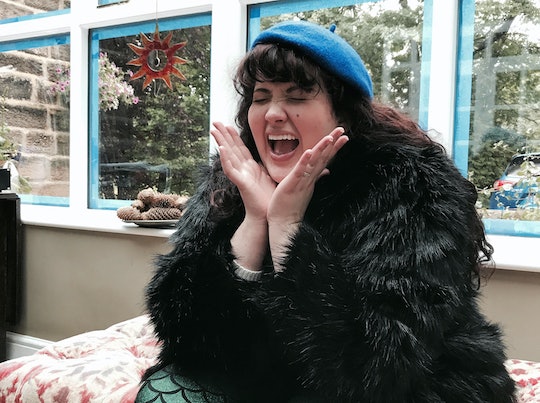 My Inverted Nipple Made Breastfeeding Hellish

I've had an inverted nipple for as long as I can remember. For a while, I was concerned that my "innie" might frighten potential partners: Would they think my left breast had been mauled by a beast, or that I'd fallen victim to a sadistic serial killer's whims, like something out of Saw? Would I need to move to a frozen tundra — a place where I'd forever have cold, hardened nips — just to feel a little more normal? But for the most part, no one said anything about it. (And if they had, they wouldn't have deserved to see me in my birthday suit, anyway.)

After a while, I started feeling OK about my inverted nipple — but that changed when I started breastfeeding. During the first few weeks of my daughter's life, breastfeeding with an inverted nipple was hellish. Although I'd been told that nursing my baby would lead me forge an instant and all-consuming bond with her, getting her to latch was a nightmare. My daughter's sloppy, failed attempts at suckling would leave both of us sobbing at equally horrifying frequencies.

There were a few reasons why breastfeeding was difficult AF in the early days. My daughter, Luna, weighed only five pounds or so at birth. She was small and weak and she didn't have the energy or skills needed to latch on. It took the kid weeks to learn to breastfeed, even on my non-inverted nipple.

That innie, however, was perhaps the greatest struggle of all. Usually, she couldn't even find it. Her lips would sort of wander around the whole ta-ta and she'd start drooling, leaving me covered in more spit than one would expect a creature smaller than a Yorkshire terrier would be able to produce. She'd get hungrier and more impatient as I Googled formula alternatives on my phone — just in case.

"All you can do is keep trying," my midwives would say. "Stick with it. She just needs to practice."

I'd try to help her by elongating my nipple with my fingers before attempting feeding. I'd pull and poke it, pleading with it to make an appearance. Sometimes I'd use the suction of my breast pump so the innie would grow swollen and more visible. One of the health visitors who came over to weigh Luna in those early weeks also suggested "lots of foreplay" with my partner before nursing, ostensibly so my nipples would harden and grow more visible, but I could never quite manage to do that. What can I say? Fooling around for the express purpose of getting my daughter to latch was sort of a turn-off.

Nothing particularly helped Luna figure things out, anyway. She hated that damn nipple. She almost never cried or screamed, but put her in front of Innie for 10 to 20 minutes and the girl could clear the room.

At some point, one of my relatives commented on how "sad" our situation was. I asked them to elaborate. At this point, Luna wasn't getting the milk she needed and wanted, when she wanted it. Whenever I wasn't trying to get her to latch, I had to be glued to a breast pump. Things got to a point where I literally felt as though my entire life revolved around latching lessons and pumping. Meanwhile, I feared that my baby was going to resent me for being unable to feed her on demand. I feared that she wouldn't realize that I was trying my best.

"It's just, I feel sorry for you," the relative in question said. "Your poor nipple. If you didn't have this flaw, things would be so easy."

Something inside me kind of clicked in that moment. The person speaking didn't say those words with malicious intent. Hell, she didn't say anything I hadn't thought about before. Yet something about hearing it said aloud — hearing about my supposed "flaw" — made me come to a pretty important realization: My innie wasn't a "flaw." It was just a part of my body. It was just a thing about me. It was just the card I'd been dealt.

For the first four months of motherhood, my inverted nipple felt like a personal failure of mine, even if it was something I had absolutely no control over. I wasn't intentionally causing my kid distress or grief. I wasn't willfully disrupting her meal intake. I was trying my best with the tools I had at my disposal, and I would keep trying until she started suckling on that goddamn breast.

So that's what I kept doing. It wasn't easy, and there was a lot of crying from both parties involved, for what often felt like weeks at a time. I kept investigating formula feeding — just in case. I kept pumping.

Sometime after her 20-week mark, I put her on my left boob for what felt like the millionth time and she found my nipple.

There would've been no shame in giving up, of course. Some things aren't meant to be, and motherhood isn't a "one size fits all" kind of deal. But breastfeeding was something I really wanted to do. I wanted to do it beyond any logic or rationale.

Some part of me must have known that Luna would keep getting bigger and stronger over time, even in the moments when I felt most exasperated. And you know what? She did. Sometime after her 20-week mark, I put her on my left boob for what felt like the millionth time and she found my nipple. She found it without making a big deal out of the achievement whatsoever. At that moment, my heart filled with the desire to weep and jump and run into a field, where I could weep and jump even more. She found Innie for good that day, and she's found it every single day since.