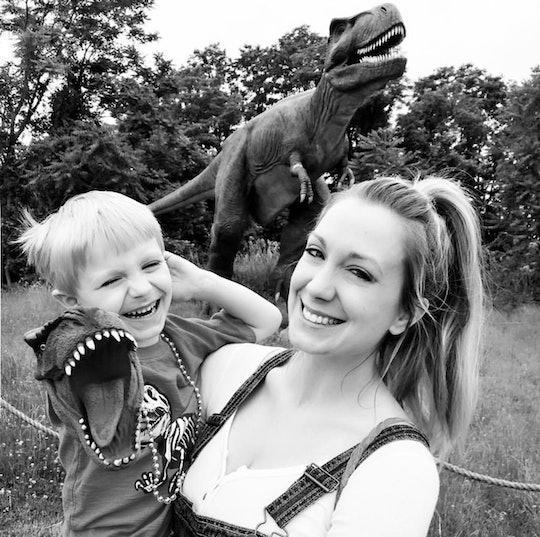 My Kid Eats What I Give Him, Because That's Our House Rule

While eating in our house can sometimes feel rushed or not always well planned out, one thing is always consistent — you eat what's in front of you or you don't eat at all. For me, this was a no-brainer, non-negotiable rule that I implemented immediately at the first sign of the picky toddler phase. So, at our house, my kid eats what I give them because that's our house rule. That's it. This may seem harsh to some moms — or you might be thinking that if you tried to implement this rule in your house, your kid would starve — but hear me out. If you take away the choice to be picky and demanding about food, guess what happens over time? Kids stop being picky and demanding about food. There. I said it.

Mayo Clinic reported on children's nutrition and advised that moms "respect their child's appetite — or lack of one" and be "patient with new foods." Not respecting their appetite creates a power struggle, and creates frustration and anxiety about food. So I make it simple. You eat what you get. I respect his appetite and his taste because I know that if he's hungry, he will eat. I don't force him to try new things (although I do encourage it) because doing that almost never works. If he's in the mood to try something new, he will. If he doesn't want to eat what I make him, then that tells me he's not really hungry.

But the kicker is, while I respect his appetite and his hunger levels, I will not make him something else to eat because — well, to be honest, that's a pain in the butt for me — but also, I feel like doing that teaches kids to be picky about what they eat. My child isn't going to starve himself to death. If he's hungry enough, he will eat whatever is in front of him because he knows there's nothing else coming. He doesn't have a second option because he's never been given one. If he chooses not to eat what I made, then I want to show him that I respect his choice and teach him that it's good to listen to your body. But that doesn't make me a short-order cook.

If he's hungry enough, he will eat whatever is in front of him because he knows there's nothing else coming.

As moms, we all want our kids to eat well, and to not go hungry or fill up only on junk food. But what do other moms think about my rule? I surveyed several moms and they all had pretty different opinions. Some moms were strongly against any kind of force feeding, telling me that they hated when their parents would make them eat things when they were growing up, so they give their child different choices. But most of the moms follow the "you get what you get" rule in their home in one form or another, and in some really creative ways, too.

One mom said if her daughter doesn't want to eat the prepared meal, she is allowed to have a healthy protein and veggie option of her choice, but she has to get up from the table and get it herself, which makes her way less picky about eating what's in front of her. Another mom says she does the grocery shopping with her kids, and they're allowed to have input in what they make for their meals. Her kids help prepare the food, and they enjoy it together without any surprises.

Now let me clarify something: the "eat what's in front of you" rule is not a force feeding rule. I do not force my child to eat anything he doesn't want to eat, but I do encourage him to try new things at least once to see if he likes it. If he doesn't, I don't force him to eat it, but I will reintroduce it at another time. If he still doesn't like it, I wait and reintroduce it again. In my experience, putting the same food he's refused before on his plate can work. He has gone from hating something to liking it over time just by being reintroduced to it. But there's a big reason why I don't force foods — I believe this develops unhealthy eating habits, and experts agree.

I do not force my child to eat anything he doesn't want to eat, but I do encourage him to try new things at least once to see if he likes it.

Dina Rose, a sociologist, parent educator, and author of It's Not About the Broccoli: Three Habits to Teach Your Kids For a Lifetime of Healthy Eating, shared with The Washington Post that while many parents have different feeding styles, the "food police" can create negative habits when forcing their children to eat. "Mealtime becomes a battleground, tense and unhappy, an association that can last into adulthood. Kids won’t learn to listen to their own hunger cues when forced to eat foods they don’t want, which can lead to adult overeating," the article reported. There's a big difference between making only one meal for dinner and forcing your child to eat something.

It's also important to note that while I do prepare healthy balanced meals for my son, I mostly incorporate foods I know he likes to eat sprinkled in with some new things for him to try or things he may not like. I also involve him in our grocery shopping, which he enjoys. He's even developed an interest in helping prepare our meals now, which makes eating it even more fun. But for moms with younger ones who are just starting to eat solid food, I think you still have to offer them lots of different choices so they — and you — can learn what they like and don't like. (Without forcing it into their mouths.)

There's a big difference between making only one meal for dinner and forcing your child to eat something.

While the "eat what's in front of you rule" works in our house, there is never a one-size-fits all method to parenting. Every child is different and each parent has their own parenting style. This rule works for my parenting style, with my kid. If you're a mom who's been struggling with a picky eater, why don't you try gently incorporating this rule in your house? You never know, it just might work.