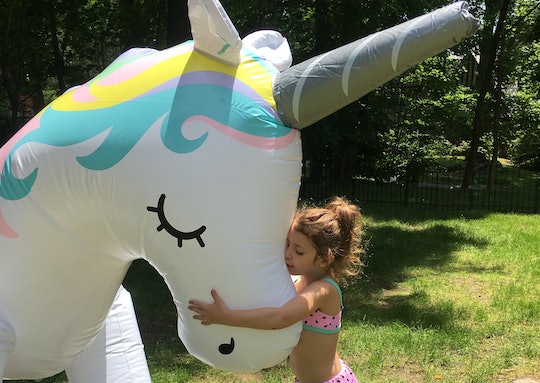 My Little Kid Has Big Emotions, & I'm The One Who Needs To Learn To Handle Them

"I see this is the 'everyone-gets-a-prize' house," my friend said jokingly to me, as my husband relit the birthday candles on a cake so each kid — including our crying daughter, whose birthday it was not — could blow one out on their own. Three months ago, this kind of gesture by my husband to calm our crying daughter, who was not in fact the birthday girl, would never have even been a thought that entered his mind. Right here, right now while we helped to host our friend’s daughters’ birthday, was a different story. But my daughter's sudden behavioral changes have led us to try whatever we can do help her. We’ve sought the assistance of our school district's early intervention programs and talked ad nauseam with her preschool teachers. While our daughter doesn't have any kind of ABC condition or disorder (think ADHD, OCD, ODD, etc), and there isn't anything beyond too-big emotions for my soon-to-be 4-year-old kid, we know that at the moment she is struggling.

The emotional outbursts, frustrations, anger, and bloody, murderous cries were something we thought only happened during the so-called “terrible two's.” But things have, if anything, intensified since my daughter inches closer to 4.

“Around the 4-year-old stage and older, the part of the brain that starts to grasp reasoning and logic begins to develop — to expect a child to be reasonable before that is an unreasonable expectation,” says Maureen Healy, a child psychologist and author of Growing Happy Kids and The Emotionally Healthy Child (coming October 2018).

Healy explains that some children, like my daughter, may have a more intense or fast-moving energy, so my daughter’s little brain is working at warped speed to try to solve problems without understanding she’s not emotionally mature enough to do so yet.

This might explain why every morning when she rushes into our bedroom to tell me her alarm clock is red (stay-in-bed), she asks if she's still a good girl because it's not quite green, and begins to softly whimper at her disappointment for failing yet again (so she seems to believe). How can you be so hard on yourself, at (almost) 4 years of age? I've asked anyone who will listen.

That drive to succeed, and to get it right on the first try, persists through her day — she gets it from us.

As I guide her back to her room and tell her an upbeat story to distract her from the sadness the owl clock on her nightstand brings, we watch it go from red to green (get-up-time) like a traffic light. As any parent knows, we're not torturing our child to stay in her room; rather teaching her boundaries and bedtime routines. She perks up, and wants to start her day. But that drive to succeed, and to get it right on the first try, persists through her day — she gets it from us. And while friends and nannies at the playground will tell you encouragingly that these are wonderful attributes for your children to have as they get older, all you want to say is "No sh*t, Shelly. But she's 4, and making our life a living hell."

When my husband gives her the wrong yogurt or pours just a tad too much milk in her favorite breakfast teacup, because "Mommy knows how to do things," the tears well up in our brown-haired blue-eyed daughter's eyes and she lets out a murderous wail. Using tactics I've picked up over the past few months, I'm usually able to quickly calm her down by distracting — “here, try cutting your lunchtime sandwich in fours for me, sweetie,” — or practicing the breathing techniques of the Color Monster in her favorite new big-book-of-feelings (it works, I swear).

Though we've always known we had a sensitive and shy child, this new territory we've entered over the past few weeks as she inches closer to her fourth birthday (Wonder Years, you might call these leaps, eh?) has been heartbreaking for us to help her maneuver to say the least. Something that may make another child frustrated, mad, or sad for even 10 seconds, might be something that sets our daughter off into a tornado of emotions that can last hours.

We know that this smallest of things, while an annoyance for another kid, will be something ours will struggle with, and remind us about, until bedtime.

At the party, she is grappling with her wants and needs. "But I want to sit in the birthday seat too," turns into red-faced fits of crying when we try to explain that it’s not her birthday — though her “big day” is just around the corner, too.

"But he's allowed to sit in the chair with the birthday girl," our daughter cries as another boy squeezes his way into the double-armed Victorian chair with the birthday girl. Explaining to a tot why some things are OK for some people but not for others is always going to be a lose-lose situation. So we try to redirect things by bringing all the kids' chairs closer around the chocolate mousse cake waiting to be lit.

This works for the moment and we are able to happily carry on with singing our little friend the happy birthday song… until it comes time to blow out the candles. When you have a child whose meltdowns are massive in a not-quite-everyday-way, you know that just because you were able to close the door on one does not mean you found the key that locked them all up. Another usually follows. Because the tantrum is not really ever over the spilt milk, or the sock that's twisted, or the crayon that broke. Your little one is usually dealing with something that goes deeper. “Emotionally sensitive children have a different mindset than their peers and will be more reactive and unable to slow down and reason with themselves before allowing something that triggers them to affect them,” Healy explains.

The candles are blown out, except the one that keeps flickering back on. Damn. How could I have been so careless to include that candle (because you know, kids usually like those kinds of things, just not mine). I cringe as my child keeps missing her chance to blow it out though (if only my magic globe had forewarned me of this!). I take a deep breath as I know what's coming next. The tears start to flood out now and tiny fists are clenched as our daughter exclaims it's just not fair (when will it ever be a good time to tell her life isn't fair?).

We know that this smallest of things, while an annoyance for another kid, will be something ours will struggle with, and remind us about, until bedtime. In our attempts to gather as many tricks and tips from therapists trying to help us through these massive meltdowns in the moments that they occur, we wanted to use every hiccup along the way as a learning experience to teach our daughter how to guide herself away from doomsday. But when all eyes are on you, and your kid is the only disruptive one at the no-big-deal little soiree you tried to throw together, the sense that we were failing as parents begins to register. I know my husband is feeling it too. And I completely understand why he does what he does next.

"Everyone gets a turn!" he gleefully exclaims with a hint of desperation in his voice, literally hoping to turn our daughter's frown upside down. So he relights the candles and lets all the kids get a chance to blow one out. Something the birthday girl didn't even seem to mind herself (thank you, sweet child).

That’s when a friend commented on our approach to parenting.

To be clear, we do not ascribe to an “everyone gets a trophy” mode of thinking. My husband, a Bosnian refugee, left his hometown after the war ended and came to America alone as a pre-teen, graduated school with top honors, and rose the ranks of the banking industry with no thanks to anyone but himself. A daughter of middle-class, union-working blue-collared parents, I hustle everyday to establish myself as a freelance writer in a competitive industry. No one can pass on the merits and values of what hard work and commitment gets you more than my husband and I, something we pride ourselves on. A blue ribbon or trophy-finish is not something we take lightly.

This kind of comment by another mom so flippantly, while not at all malicious (we’re still #bff kind of friends), thrown my way is not something you can just shrug off when you know all too well the long days of internet searches, phone calls with specialists, and sleepless nights you've had in the past few weeks trying to help your distressed child out.

“Once emotions and mindfulness become learned and the part of the brain that understands logic becomes more developed, a sensitive, strong-willed child will cooperate and go with the flow more easily,” Healy tells me. At least I know it will get better (um, right?).

It's little moments like these that you either want to hug your little one more tightly — "Mommy is here for you" cannot be said enough — or crumble when others judge you. But if a crash course in parenting 101 has taught me anything at all, I know that no one understands what you're going through more than yourself. Besides, everyone has their own 'ish to deal with and family problems to figure out. What can seem like an innocent comment in passing from one person to another can sometimes be sensitive for someone else whose shoes you haven't walked a day in.

As they always say, this too shall pass. So even though every day feels like an uphill battle laced with magic dust and fairy wings and all the sweet things my quirky daughter says that makes me feel all warm inside, I just swallow my pride, let my kid blow out a damn candle and pray for a better day tomorrow.