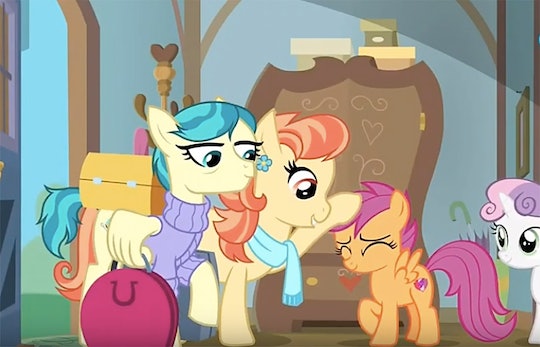 In the midst of Pride Month, Discovery Family's My Little Pony will soon introduce a same-sex couple in an episode set to air Saturday, June 15, as Comics Beat reported. The episode will reportedly feature two female horses named Aunt Holiday and Auntie Lofty, the "caretakers" of Scootaloo, one of the most beloved residents of Ponyville. Can I get a "neigh" for LGBTQ representation on television?

More Like This
13 Shows For Kids Who Love Princesses
The Avengers Campus Is Open At Disneyland: Everything You Need To Know
Sesame Street Characters Can Now Help Your Kid Unwind Before Bed
The Best PBS Kids Shows Of All Time

My Little Pony: Friendship is Magic, a TV series on Discovery Family, revealed in March that Season 9 would be its last. The adorable show started airing its final 26 episodes on April 6, a lineup that includes an installment titled, "The Last Crusade." The title might sound a little dramatic for a kids TV show, but the content is anything but dark. In fact, the upcoming episode is full of light and love, as evidenced by its inclusion of a same-sex couple, Aunt Holiday (Jackie Blackmore) and Auntie Lofty (Saffron Henderson), according to Pride.

The episode centers around Scootaloo (Madeleine Peters) and her parents, who have been absent in the show thus far, Comics Beat reported. Fans have had questions about Scootaloo's mysterious biological family, so this installment is likely to provide some answers.

But before you assume these two are just "gal pals," as the media likes to say, take a look at what Michael Vogel, one of the writers of Ponyville Mysteries: Riddle of the Rusty Horseshoe, revealed on Twitter back in October 2017.

It all started with a fan account sharing an art piece featuring Scootaloo with Aunt Holiday and Auntie Lofty. "What a cute couple!!!!!" Vogel wrote in response to the cute rendering, to which a fan replied, "Are they really lesbians in the actual book?"

After reminding the inquisitive fan that the two are definitely not sisters, Vogel said, "When I say 'cute couple' I'm saying that Aunt Holiday and Auntie Lofty are a cute couple. Yes."

My Little Pony: Friendship is Magic's upcoming episode is a big step forward for LGBTQ representation on television in the United States — the episode has already aired abroad, according to Pride — especially where it concerns children's programming. The most recent example of this upwards trend is Arthur featuring a same-sex wedding between Mr. Ratburn and his partner, Patrick. And while I can't resist a good ol' fashioned gay rat wedding, I think the "Last Crusade" is especially notable because it highlights the reality of LGBTQ couples as loving and capable caregivers.

Numerous studies have shown that children adopted by same-sex parents (like in the case of Scootaloo living with Aunt Holiday and Auntie Lofty), are as well-adjusted as children adopted by heterosexual parents. But despite these findings and the existence of thriving LGBTQ families across the United States, more and more laws are cropping up to prevent same-sex parents from bringing children into their homes. These anti-LGBTQ policies are why episodes like "The Last Crusade" are important — every bit of representation and acceptance counts in this moment.

To celebrate My Little Pony: Friendship is Magic's representation of LGBTQ families, tune into Discovery Family on Saturday, June 15, at 11:30 a.m. ET.