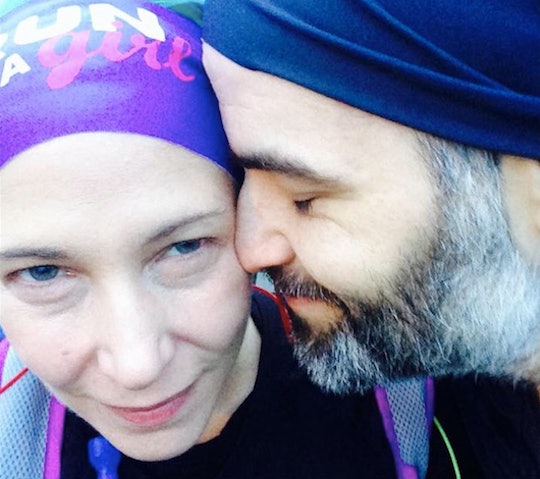 My relationship with my mother-in-law isn't great, and never has been. I always feel like she's judging and shaming me because, well, she is. I've come to a place in my life, though, where I try not to let it bother me. We're both adults, and we don't have to get along. I don't care if she likes me, or approves of my choices, or accepts me as part of her family. So, for the most part, up until now I've been able to ignore her. I don't think I can keep it up, though. My mother-in-law's judgment is in danger of ruining my marriage, and I have no idea how to fix this potentially catastrophic problem.

Not to brag, but my husband and I have a pretty awesome relationship. We have five children, ranging in age from infant to pre-teen. We definitely experience our fair share of ups and downs, to be sure and just like every couple does, and we don't agree about everything 100 percent of the time. We occasionally disagree, and fight, and dislike one another, but I don't necessarily see that as a bad thing. Conflict is a normal part of being in a relationship, and we always find a way to make up afterwards (even if we both think we were right). As sappy as it may sound, we're best friends.

I credit our strong relationship, in large part, to the fact that we try to be completely honest with each other. Yes, even about the bad, or uncomfortable, or potentially problematic stuff. But there's one area in our shared lives that we can't discuss honestly. Well, we can't unless we want to engage in a guaranteed, horrible fight that will undoubtably end with us saying things we don't need. The topic, of course, is my mother-in-law, and her relentless judgment in particular.

You see, my mother-in-law has no boundaries, and seemingly no filter, which gives her free range to be as condescending as possibly. She seems hellbent on having to "just say something," especially when her son or grandchildren are concerned. Sometimes I really do think she means well, don't get me wrong. After all, she wants what's best for them, she loves them dearly, and most likely she thinks she is being helpful by telling me how I should parent or letting me know she feels left out.

I don't want to start something with her and, in my experience, people who say stuff like that want you to respond in a way that facilitates a combative conversation.

Honestly, though, her statements rub me the wrong way. Why? Well, because it's none of her business how I have decided to raise my family, and it's not her place to say something when she feels like I'm not doing things "her way." Her son is a grown adult, and her grandchildren are my kids, not hers. But my attempts to set healthy boundaries with her have failed, unfortunately, and in truly epic ways. Without fail I am inevitably cast as the "bad guy" for not emphatically listening to her unsolicited advice.

It typically starts like this: my mother-in-law will send a text, or comment on a Facebook post. She might say something passive aggressive, like, "I can't believe the baby is still in pajamas at dinner time!" or, "Someone get that baby a haircut!" Or maybe, just maybe, she will say something about our vacation or holiday photos, like, "It looks like you had a such great time, I wish I had been invited." I mean, what do I say to that? I have no idea how to respond. It's a trap, and she knows it.

He will make excuses for her behavior that seem laughable to me, expect me to cut her slack that she doesn't deserve, or ask me to accommodate her often unreasonable wishes. And in those moments I can feel our relationship splintering.

So, I won't respond at all. I don't want to start something with her and, in my experience, people who say stuff like that want you to respond in a way that facilitates a combative conversation. But if I choose to go high, or rather, lay low, I know I have a better chance of my mother-in-law simply forgetting all about it. Plus, it improves my chances of not saying something I'll later regret.

But this strategy doesn't really work with my mother-in-law anymore. Now, if she doesn't get the response she hopes for, she will almost always involve my husband. She will call, text, message him on social media, or write an email, to make sure I saw whatever it was she wrote. Yes, sadly, I'm serious.

My husband will innocently ask me about whatever it is his mother has brought up, not realizing how much it will bother me. Then, because of our aforementioned honesty policy, I will tell him exactly how I feel. I'm a little ashamed to say that this sometimes includes what I think of his mother, and where she can stick her opinions when it comes tome. And I fully admit this is not a good way to communicate with my partner. I understand how hard it is to stay calm when someone is criticizing your family, but I can't help it.

I feel like I am forced to either play nice with his mom, or continue fighting with my partner and best friend.

The thing is, I'm his family, too. I want him to feel outrage when his mom criticizes me. I want him to side with me, to tell her that what she said or did was inappropriate, or even just tell me I'm right. Instead, he usually gets defensive and protective of her. He will make excuses for her behavior that seem laughable to me, expect me to cut her slack that she doesn't deserve, or ask me to accommodate her often unreasonable wishes. And in those moments I can feel our relationship splintering.

Now, I don't want you to get the wrong idea. I love my husband. He's one of the best people on the planet. Most of the time, we are totally and undeniably on the same team. And I imagine he hates these fights just as much as I do. Most of the time, though, he's not the one experience his mother's criticism or low-key shaming. It's me. I'm supposed to be his best friend, so why doesn't he defend me?

I honestly hate what this is doing to our relationship. I feel like I am forced to either play nice with his mom, or continue fighting with my partner and best friend. Both options aren't favorable, so I'm stuck between a rock and a very, very hard place. I know I should put my foot down and make him deal with her, but when you're stuck in the middle between your partner and their mother, "putting your foot down" is easier said than done.

So, while I know exactly how we got here, I have no idea how to fix my relationship with my mother-in-law, if it's even possible at this point. In the meantime, I try to remember that I can't control what other people do, say, or think of me. Most importantly I can choose to go high, even when she doesn't and even when I know I'm right. In the end, it's just not worth hurting my marriage or the person that I love. It's just not.