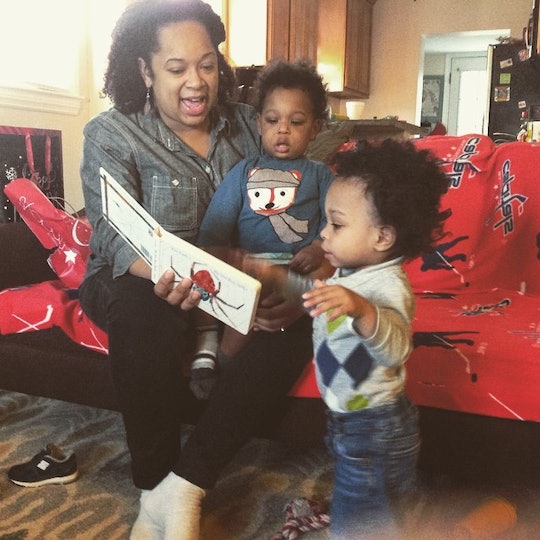 My Nanny Quit & It's All My Fault

We hired a nanny to take care of our twin boys when I returned to work after maternity leave. This woman had the perfect job: a salary of $31,200 a year, two-weeks paid time off plus federal government holidays, reimbursement for health insurance, and a reasonable commute. While I was at work, she'd send me texts with pictures of the boys smiling and playing. I'd drop in on her at lunchtime, tired from being up all night with the boys, and find her napping on our couch while they were upstairs sleeping. Or she'd be sitting on the floor reading to them, kissing them, rocking them to sleep; singing to them. I'd always see her doing everything I wished I could be doing; everything I thought I should've been doing. And she was taking my money while at it.

So naturally, I hated my nanny.

The mere sight of her in the mornings would make me mad. Not angry. Anger is a feeling for rational people. Anger arises from provocation. No, I was mad — as in, acting wholly unlike myself — when it came to dealing with our nanny. I'd do things like wake the boys to play with them before I went to work. Then as soon as she arrived, I'd go straight to work, leaving the diapering and feeding to her under the rationale that I was getting my "money's worth."

During my mid-day lunch visits, I'd use the time to show her how to do her job. If one was crying, I'd soothe him in a way I felt she couldn't, by rocking and caressing him, shooing his cries away until he fell asleep or decided to play with one of his toys. I'd show her how to feed them, how I liked to have their faces washed, how to change their clothes the proper way. I asked her many times, in multiple ways, to document their every move. And for a while, she did. She wrote down when they ate, pooped, and slept in a notebook.

Then I found an app that I thought would be more "convenient." I made her download it to her phone with our login so that her entries could sync with ours and I could check it while at work, all for the purposes of "understanding their schedule." To her credit, she handled my micromanagement with grace, silently assenting to my demands.

I wonder if she realized who she was up against.

This whole situation was an emotional conundrum — one that still feels impossible to explain, even now. I wanted her to love my children just as much as I did. But if she dared love my children that much, what would be my purpose? Who would really be their mother? I wanted to make it clear to her that no one could do a better job at being their mother than me, even if it meant making it impossible for her to do the work I hired her for.

During a lunch visit, I sat at the kitchen counter watching her change a diaper on the living room floor. My other baby happily swung around in circles inside his bungee chair hanging above the dining room entry way. Only our dog silently willing my food to fall off my fork paid any attention to me. I was struck with the urge to cry. None of them needed me. The nanny didn't need me. Most importantly, my children didn't need me.

I tucked away my feelings, and before heading back to work, I asked her if she had reviewed the new employment contract I drafted. She responded without looking at me that she'd review it over the weekend, her tone nonchalant. I should've known her lack of eye contact meant something.

I was so occupied with our negotiations that I didn't notice when she became detached. I took her excuses of illness, an appointment, or some otherwise undocumented time off for what she claimed them to be. If I had more managerial experience, I would've seen the signs of an employee searching for a new job well in advance. But I ignored them, or rather, I just assumed that was something she wouldn't even consider.

Because who would want to leave that job? She didn't have to wear a suit or uniform to work, obviously she could nap, play on the Internet, watch old television shows, do whatever she wanted. The best part included spending time with my children — the best children. She got to read to them, play with them, snuggle with them, kiss them, feed them their first solid foods, hear their first words, experience their smiles. Why would she ever want to leave?

When she quit, I was sad, angry, and jealous. Sad that she would choose to leave. She was the only other caretaker besides me and my husband that my boys knew. We trusted her. How could she abandon them? I was angry that she quit before I could fire her. Not that I would have, but I wanted to be the one to end our relationship. I wanted the upper hand because I wanted control over who my children looked to for security, love, and care. I resented the fact that she stole those precious early moments and then didn't cherish them enough to stay. I resented her for the very job I'd hired her to do, and then I resented her even more when she decided to quit.

I was jealous because she got to mother them when I couldn't. It wasn't her fault, but I took it out on her nonetheless, and then she quit.

I took my working guilt out on her. I turned her into my competitor instead of my teammate. My boys are older now and don't remember her. They love their daycare teachers, and I learned to suck up my own pride and jealousy at hearing one of my sons call one of the women there "Mama." I admit it broke my heart hearing that, but I didn't take it out on his daycare teacher. I know name confusion is common when a child has multiple female caretakers in his life. I now know the value of a good childcare provider, one who cares for my children like their own, but is happy to give them up to me at the end of the day. I wish I'd known it then.

Not too long ago, I emailed our former nanny to see if she still lived in town and wanted to pick up some babysitting shifts. She declined, saying she'd moved far away but asked about the boys. I attached a photo of them at their Christening to my reply, proudly updating her on their walking and talking. I expected her to respond with the usual exclamations of cuteness most people had when seeing that particular photo. I wanted her to say she missed them. I wanted her to write, "Look how much they've grown!" I wanted her to express some motherly pull of affection. Her love would've made my jealousy warranted, help to excuse my behavior just a little.

But she never wrote me back.