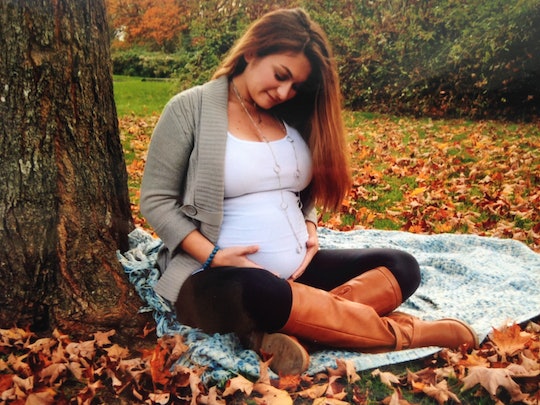 My Obsessive Pregnancy Diet Backfired On Me In The Worst Way

When I finally got pregnant after months of infertility treatments, I was determined to do everything I could to have the perfect pregnancy in order to erase all the stress I'd been through from my mind. I never expected to have trouble getting pregnant, but I did, and it was a wake up call for me to realize that we aren't 100 percent in control of what happens to our bodies. Having learned this lesson the hard way, once I was was pregnant I set out to control the things I could, mainly my exercise, the chemicals I used, and most importantly, by controlling what I ate during my pregnancy.

It pains me to admit it now, but I was absolutely that smug pregnant woman who told anyone who would listen (and even those who weren't actually listening but were too polite to tell me to shut up) about my prenatal yoga practice and how I was keeping up with my cardio and light weight-training so that I'd be strong enough to deliver twins. I judged the crap out of any pregnant woman who dared to have a cup of caffeinated coffee near me and if you were a waiter or waitress who ever had the displeasure of serving me while I was with child, please consider this to be my public apology for grilling you about every single ingredient on the menu (except for the jerk who took the bread basket and my appetizer away that one time in the steakhouse without asking if I was finished, I stand by what I said then).

Having gone through so much time, effort, and yes, money to get pregnant there was a part of me that felt like I was fighting an uphill battle against the universe. Was there a reason why I couldn't get pregnant on my own? I worried that I was destined to be a bad mother because I was fighting my body to make it happen. To relieve myself of those fears I felt like I had to be a perfect mom, starting with my pregnancy. I thought if I could follow all the recommendations for pregnant women about what to do and eat and what foods to avoid then I'd end up with healthy babies. It would be my way of proving to myself that I was worthy of having kids.

Now, four years later, I'm thrilled if I can get my kids to eat anything, even if it did come frozen and in a box, and my parenting style can be best described as "winging it." I know how ridiculous my pregnancy goals sound in hindsight, but pregnancy hormones make you think and do wild things. And that's exactly what I did.

Even when I wasn't eating out, I was super strict with my diet during pregnancy. I read all the articles I could online about what pregnant woman should avoid eating and took it to the extreme. Rather then switch to decaf coffee, I was so afraid of trace amounts of caffeine that I drank steamed milk instead. Lunch meats were problematic because of bacteria concerns, but most doctors say they're fine if you microwave them until warm. I, however, refused to eat them all together. Ditto to soft cheeses and apple cider, even if it claimed it was pasteurized (and therefore safe) because what if it wasn't? The only exception I made was for eggs over easy, because my cravings for them could not be denied. But the few times I broke down and had them I spent the night Googling symptoms of listeria.

I usually love sweets and vegetables, but when I was pregnant the smell of chocolate turned my stomach and leafy greens made me gag. I was bummed that sweets were out of the picture because part of me was looking forward to having a built-in excuse to eat cookies without guilt, but not being able to eat veggies at all (except for potatoes, which don't really count) was more problematic.

I started packing a Tupperware full of raw spinach leaves with my lunches for work, and would cram them into my mouth as fast as possible to try and beat my nausea.

Pregnancy books cover a ton of topics, but it's my personal opinion that they do not do a good enough job explaining to moms-to-be just how horrible constipation while pregnant can be. I'll spare you the details, but suffice it to say there were times when I was in so much pain from being unable to poop that I was positive I was having contractions. Maybe it's deliberate, like your body's trying to get you ready for delivery and the poop pains are for practice, but it sucked, and the lack of fiber in my diet wasn't helping. I never realized how much of my daily fiber came from fruits and vegetables, and once I wasn't eating them, my digestive track paid the price. I'm grateful my doctor told me about fiber supplements, but I just wish he had clued me in much sooner.

I went back and loaded up a second plate with spinach because after all, he was right, spinach is good for me and the babies. Except that this time it wasn't.

Beyond my troubles below the belt, I wanted to eat veggies because I was worried about every single possible birth defect my kids might have, and I wanted to avoid the ones I could by making sure I consumed enough folic acid and vitamins. Leafy green vegetables, especially spinach, have a lot of folic acid, which is what prevents spina bifida, a defect where the baby's neural tube in their back doesn't close before birth. I started packing a Tupperware full of raw spinach leaves with my lunches for work, and would cram them into my mouth as fast as possible to try and beat my nausea. Then I'd celebrate giving my growing kids the nutrients they needed by having the rest of my lunch, grilled chicken or a veggie burger on a wrap with fruit on the side. My coworkers would often comment on my healthy pregnancy eating habits, which only made me even more of a snob.

I had only a few bites left and was anticipating diving into my fries as a reward when I looked at the remains of my spinach and saw it. A worm. Or, to be specific, a segment of a wriggling worm with a jagged edge that look suspiciously like a match for my left incisor.

One day in my second trimester, I was running late in the morning and didn't get a chance to pack my food for the day, so around lunchtime I headed to a local salad buffet with a colleague. I'd eaten here countless times before and loved it because they had everything from a full salad bar to the world's best mac and cheese so I knew there would be something there both healthy enough for my growing bump and satisfying enough to soothe my finicky stomach. Sure enough, I was able to pile a plate high with chicken, fruit, sweet potato fries, and macaroni.

I was just about to waddle over to the cashier and pay for my food when my coworker teased, "What, no spinach? Tsk, tsk." If I could go back in time, this is the moment when I would tell him to mind his own damn business and then reach over to steal one of his hot wings so he knew I was serious. But there were other people from our workplace having lunch at this same buffet and I didn't want my reputation as World's Healthiest Pregnant Woman to be tainted. I went back and loaded up a second plate with spinach because after all, he was right, spinach is good for me and the babies.

Except that this time it wasn't.

I raced through eating my greens as usual, trying to swallow them down before my morning sickness could push them back up my throat. I had only a few bites left and was anticipating diving into my fries as a reward when I looked at the remains of my spinach and saw it. A worm. Or, to be specific, a segment of a wriggling worm with a jagged edge that look suspiciously like a match for my left incisor. Like Snow White and her poison apple, I'd just learned that not all fruits and veggies are good for you.

I was so worried about what I ate while pregnant that looking back my memories are all about food and not about enjoying this amazing transformation that was happening to and within my body.

I panicked, obviously. I screamed, ran to the bathroom, and up came the spinach. I tried to peer into the watery depths of the bowl to see if the other half of the worm was in there, but I didn't see it, so I was convinced it was working its way through my digestive track, poisoning my body and my babies with some rare earth-wormy disease.

My coworker had the decency to not laugh at me (that came later) and we walked back to the office where I cried on the phone to my partner, Googled furiously, and went to seek assurance from every woman I worked with who had ever been pregnant that my children would be OK. When I called my OB in tears and told her I accidentally ate a worm and asked if I should come in she laughed. "Just think of it as extra protein, " she said, "you'll be fine."

In retrospect, I realize how ridiculous I was being over my diet while pregnant. My doctor told me all along that a cup of coffee each day was fine and he certainty never told me to stop eating lunch meat all together or avoid cider and pasteurized cheeses. In fact, when I went in for my weekly checkup on New Year's Eve, my doctor told me to go home and have a celebratory glass of champagne because it was tocolytic (which meant it would help delay premature delivery) and would stop some of the early contractions I'd been experiencing. Of course, I didn't, mainly because the thought of drinking alcohol while pregnant was terrifying to me, lest something happen to the babies. But knowing that this one small mistake wasn't life-ruining was reassuring.

If I could go back in time I would've definitely had a daily decaf latte and the occasional toasted turkey sub (but probably not the champagne, because let's be honest, I'm a worrier). Stressing out about what you eat while pregnant only serves one purpose: to stress you out. Follow the rules and guidelines your doctor sets forth for you, sure, but it's important to remember that eating while pregnant should still be an enjoyable experience. I was so worried about what I ate while pregnant that looking back my memories are all about food and not about enjoying this amazing transformation that was happening to and within my body.

Even though my pregnancy is over, I try to remember to relax when it comes to my kids and enjoy meals with them instead of stressing about what they are or aren't eating because in the grand scheme of things, it's not that big of a deal. Karma finally taught me that — in the form of that gross little worm.