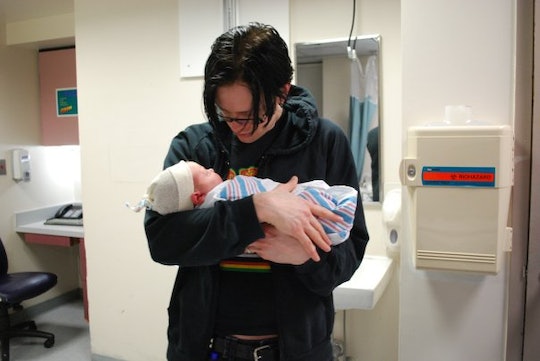 My Partner Helped Me Deliver Our Babies & It Changed Things Forever

I was not the kind of expectant parent who said we’re pregnant. No way. I was pregnant. Of course my husband was equal parts responsible for the actual creation of our family, but I felt entitled to claim pregnancy in all its biological glory as well as its awkward discomfort as my own. My body felt every moment of it, and I demanded his constant assistance. I didn’t want to feel fortunate that he was an equal participant from the start; I just expected it. We might not have been pregnant, but we were a team. We were in this together. I just assumed all couples were. He would be there to help deliver our child; I never expected any different.

But being involved as an equal partner was a new approach to parenting for him, smashing a gender role that was reinforced when he was a child with the birth of each of his three siblings. He is considerably older than they, but every time a new baby came, he stayed on the periphery, with a relative, excluded from the process. He was not especially hands-on with any of them, and neither was his stepfather. That's not how it was done in his family. So I didn’t realize what a heavy lift this full-time partnership was for him, because he never once let on that this was new for him. I had no idea how scared he really was.

From the moment my first pregnancy was confirmed, he never once objected to anything I asked of him. He carried groceries and heavy backpacks, ran every errand, bought me strange foods late at night, rubbed my feet, and pushed my growing butt up the stairs to the above-ground subway station by our apartment when I was too tired to climb up on my own. He sang the Rocky theme song whenever I felt spent, nauseated, uncomfortable or crabby, which was essentially all the time. At night he helped distract me from my increasing discomfort and insomnia by staying up with me while we binge-watched entire seasons of shows I forced on him.

With each of our children, we decided to learn the baby's sex with the 20-week anatomy scan. We also gave them their names long before they appeared outside my body. My husband felt that helped him prepare. He had always dreamed of having little girls, so for him, getting to know them and calling them by name months before they arrived helped him bond even before they were born. He was a confident partner through it all; he was right there with me as I labored each time. Although the circumstances surrounding my first birth could not have been more different from the second, he was unwavering in his presence and dedication. Each time, witnessing, helping, and then holding, breathing the baby in, skin on skin contact right from the very second each of them arrived gave him the courage to dive right in as an active parent. From the very first minute of the very first day, he changed diapers, fed them, bathed them, sang to them, gave them all they needed and more. He was not afraid. He loved them and wanted to be not just their father, but their daddy.

When I labored with our first baby, we were in the hospital. Friends came and went as the night went on, but he stayed with me the whole time. He held me through deep contractions. I sank into him, exhausted, screaming, but knowing I wouldn’t collapse. He had me. When that labor ended in an unplanned c-section, he didn’t let it faze him. Once again, I had no idea at the time how afraid he really was. He gazed right into my eyes and held my hand through it all: not letting go as they buckled the baby monitor around me and told me my time to walk around was over, not when they rolled me over and gave me an epidural I didn’t want, not when they strapped me down and wheeled me into the operating room, not when they put up a curtain and cut me open to pull out our daughter. When they cried “Happy birthday!” and then, “Oh, she’s so beautiful!” his eyes never left mine, his hand squeezing mine tighter than before.

Looking back, it was so special that he was the first to hold her. Every year on the night before our daughter's birthday, he tells her the story of how he fell in love with her instantly, overwhelmingly, completely in those first moments they shared.

Our baby was cleaned off and bundled up in a generic hospital blanket and beanie. Someone in scrubs ignored my outstretched arm and passed the bundle to him instead. Surprised, he let go my hand and received the package like a football as they explained that I was too groggy and faint to hold her. “Hey, Daddy, meet your baby,” they murmured. Before he did, he looked into my eyes and sang the opening of the Rocky theme song under his breath. “Yo, Adrian!” he prompted me, quoting from the movie, as he was ushered out of the O.R. I responded as we’d rehearsed, in a whisper, “I did it!”

Looking back, it was so special that he was the first to hold her. Every year on the night before our daughter's birthday, he tells her the story of how he fell in love with her instantly, overwhelmingly, completely in those first moments they shared. He says can’t remember if it was minutes or hours that he held her, but it gave him exactly what he needed. Maybe it was her smell, or her sleepy eyes, or her perfect, tiny fingers, or the little mewling sounds she made. She was here. He had become a daddy, and he felt himself mature into an adult right then and there, and there was nothing he wanted more. By the time I was wheeled into the recovery room and ready to nurse her for the first time, he was already her daddy.

The birth of our second daughter was different. Not wanting to risk another unnecessary c-section, this time we were at home. He was nervous about that, but he knew it was what I wanted. The labor started differently: when I lost my mucous plug at work two days before my due date, I also lost a lot of blood. Instead of heading home to inflate the birth pool and have the very zen, hippie birth experience I'd hoped for, I elbowed my way into a yellow cab in the rain, screaming, I’m in labor get outta my way! and went straight to the doctor’s office for an emergency ultrasound to make sure I wasn’t having a miscarriage.

Pronounced safe and healthy and very much in active labor, I was sent directly home. My husband met me there. He told me later he was scared to death, but he didn’t show it. For hours, it was just him and me. We tried to relax. We ate. We rested. He timed and charted the minutes between my contractions. We watched episode after episode of Breaking Bad. And then out of nowhere, transition was upon us. The midwife wasn’t there, the doula wasn’t there, the birth pool wasn’t set up. We knew the baby was coming right now. I was unmedicated and unprepared. He didn’t know how to ease my pain, and he was getting visibly rattled by the feral sounds I was making.

I heard him on the phone telling the midwife it was more than time for baby to come. While we waited for her, I got in the bathtub to relax. I remembered reading that the warm water might slow down labor, but it didn’t. All of a sudden the baby was coming and I was screaming — like a wild animal, he says when he retells this story — and he was terrified. I hadn’t made that kind of noise with our first because I had been given an epidural. Now he had no idea what to expect.

I love asking him about this moment because to me now it’s all a blur, and every time, he tells me he will never forget watching her come out. She wasn’t there and then suddenly, she was there, he always says.

I pushed for 23 minutes and to him it felt like 23 hours. The midwife and doula arrived just in the nick of time and took over. I was still in the bathtub; there was no time for a birth pool. I was going to have this baby right where I was. The bathroom was small, but our midwife made room for him because, she told him, he had a job to do. I lay on my left side in the tub. He held my right leg up while the midwife worked. I love asking him about this moment because to me now it’s all a blur, and every time, he tells me he will never forget watching her come out. She wasn’t there and then suddenly, she was there, he always says. And she was not even moving at first. He held his breath, not knowing what to think, afraid to think anything at all, and then she began to squirm and make little noises. This time, I got to hold her first. The midwife placed her in my arms. We thought that was it, but I wasn’t done. He put a hand on the baby's back and talked to me while I delivered the placenta, and then he cut the cord.

While our midwife helped me shower, it was his turn to hold her. She was so much smaller than our older daughter had been that he felt she barely looked real. She was pink and wiggly, but she relaxed in his arms while the midwife and doula helped me clean myself up and dress. I was relaxing on the floor trying to nurse when we heard our toddler, awake in the next room. My husband went to get her.

He was the one who got to say, “Good morning sweetheart! Guess what? Your sister’s here!” as he carried her over to us. She was confused but instantly awake. What had been inside my belly when she went to bed was now here. Her days as an only child were over. We’d always been a team, and I didn’t worry about being outnumbered by my children because I knew we would always share the load. We could each hold a baby. We would always take turns. He would always support me, and us, and vice versa. Now we were four.