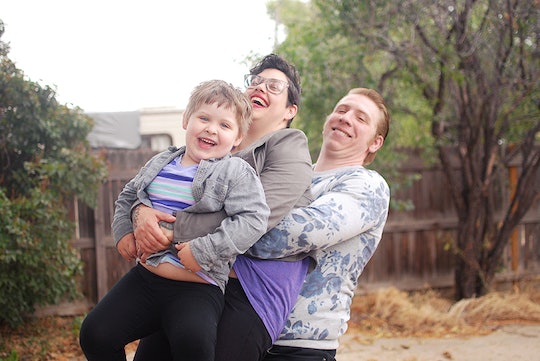 My Partner Is Hoarding Baby Clothes, & I Don't…

My partner, Jon, tends to hoard items in our house. He is the type to bring home broken lamps left on curbs with grand plans to fix them. I go through my closet every three or four months with a donation box in hand, because I've always been willing to throw things out as soon as I deem them no longer necessary. We're total opposites this way, and having a kid really brought this contrast into focus for us.

When our kid, Arthur, grew out of his baby clothes, there was a silent war going on between us: do we get rid of the clothes, or do we keep them? How many mementos of Arthur's babyhood could I handle having around? And how many souvenirs of those early months could Jon sacrifice?

The thing about parenting is that kids keep growing and changing, and as parents, we want to document all those changes and all those developments. We want to celebrate all the new things our kids are doing while, at the same time, preserving in amber the person our kid was five seconds ago (and never will be again).

Jon falls squarely in the latter category. He didn't want to let go of Arthur's childhood and throw away the baby clothes, while I was all too happy to do the honors.

Four years ago, we moved to Colorado from Michigan. We went through the long process of sorting the things we had accumulated over our Michigander years into "throw away," "donate," and "keep" piles. The task was predictably easier on me than it was on Jon.

There was a 20-gallon garbage bag full of outgrown baby clothes that I thought should be thrown out, and Jon wanted to keep them. We fought — a lot. Our other partner, Sam, took Arthur and flew to Colorado; it was time to finish packing and head out to meet her there in the U-Haul. We agreed, finally, to throw the baby clothes away. But when we got to Colorado and unpacked the U-Haul, I found out he'd snuck the bag into the truck at the last minute, unable to part with it.

I was unbelievably frustrated. I didn't understand his fixation with this giant bag of torn and stained clothes that no one was ever going to wear again.

I was unbelievably frustrated. I didn't understand his fixation with this giant bag of torn and stained clothes that no one was ever going to wear again. After all, we weren't planning to have another kid. They were just taking up space.

But for whatever reason, Jon still wanted them anyway."What if, when Arthur has a kid, they could go to our grandkids?" he said.

I sighed. I couldn't keep fighting about it. Jon gave me so many what ifs: what if he got around to making a quilt out of the baby clothes for Arthur, or what if, against all odds, we did have another kid?

Arthur is 5 years old now. No mysterious foundling has appeared on our doorstep, and the bag of clothes is still taking up space in our house. As far as I know, Jon never looks at the clothes. He just wants to know they are there, and that we've kept them — just in case.

These days, Jon's focus is elsewhere: he's formed an emotional attachment to Arthur's baby art. Since he was about 2 years old, Arthur's been drawing, filling up notebook after notebook with bizarre monsters and friendly, nonsensical animals. J0n refuses to throw out any of it, which means we have stacks and stacks of notebooks full of toddler drawings clogging up our house.

What mystifies me about Jon is that he gains such comfort from the simple act of keeping things. He never goes through the clothes and picks out favorites. He doesn't look through the drawings and choose to keep the ones of special quality or meaning. He just wants to have them. To a degree, I find that impulse sweet, but it also means that every time we try to clean the house, we have to negotiate a series of compromises.

Whenever I suggest we should get rid of something, Jon's first reaction is that we'll regret it. Then we start negotiating: how much can I get rid of where I will feel comfortable, versus how much can he keep so he stays comfortable? It's a careful balance we're always trying to strike. There is definitely a "don't ask, don't tell" element to this: I've thrown things out when he's not paying attention, and he's simply not asked where they've gone.

Jon isn't a hoarder in the sense that he has a mental disorder; he's just much more sentimental and mired in the past than I am. I tend to be much more focused on the future, on where we're going rather than where we've been. What he sees as emotional roots I tend to see as emotional anchors, sticking me in place. Mementos are fine, but can't we pare it down to one notebook? Maybe a couple of onesies?

Ultimately, I don't think one of us is right and one of us is wrong. We're just very different. But it just goes to show you that parenting and living with someone whose brain works so differently than yours is not always easy.

More Like This
How To Approach The Topic Of Emotional Labor With Your Partner
How To Ask Your Partner For Support When You Need It
How Do I Rediscover My Sexuality When I’m Completely Touched Out?
This Is What Happens To Your Vagina When You Stop Having Sex