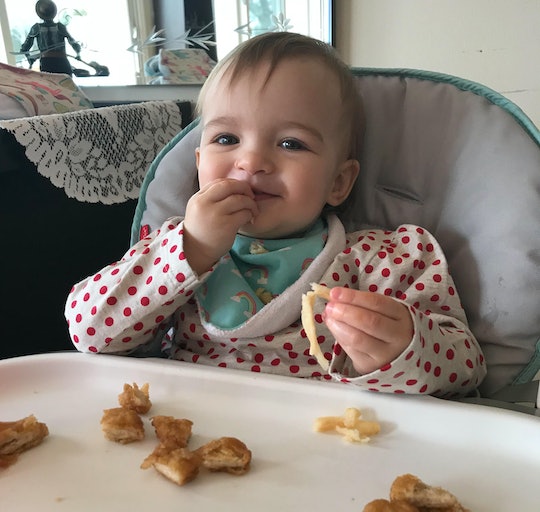 My Kid Is Made Of Chicken Nuggets & She's Fine, OK?

"Why don't you try feeding her something else?" My aunt's pointed question about my picky eater made me cringe as I put a second tray of chicken nuggets in the oven that day. My 17-month-old had already eaten six of these breaded beauties for lunch, and was going to have another half a dozen for dinner. "Aren't you worried she's not getting enough nutrients? Kids need just as much variety as we do."

I mumbled a defeated, "Trust me, I've tried," just as I have when so many relatives and friends have similarly asked about my daughter's diet in a tone of patronization. At 6 to 12 months old, Luna was an amazing eater. Beef stews, vegetable purees, chicken noodle soups, mac and cheeses, and anything one might call "healthy" were all devoured with gusto. Then it all went to sh*t.

Almost a year and a half into her life, Luna favors a six-chicken-nugget-dish over just about everything else. She'll add fish sticks, muffins, blackberries, hallumi cheese, and some flavors of fruit and vegetable pouches into the mix when she feels like it — which admittedly isn't as often as I'd like — but nuggets always prevail.

My kid is perfectly fine, and I'm done berating myself for not being able to force every layer of the food pyramid into her body.

In most people's eyes, this means Luna's getting at least some protein and carbs in her system every day, but with most major vitamins undoubtedly lacking. I often feel their overt judgment; their disapproval at my parenting skills, or perceived lack thereof, as they suggest for the umpteenth time, "Just give her what you eat!" In truth, however, my kid is perfectly fine, and I'm done berating myself for not being able to force every layer of the food pyramid into her body.

At least 25 percent of kids have some kind of eating or feeding problem (often characterized by being picky AF) according to resources put out by the St. Louis Children's Hospital, but that relatively high number does little to make some of us parents-of-pickies feel any better. It's all too easy to question whether it's us who are at fault — who've somehow caused our little ones to be difficult. Maybe we didn't introduce solids quickly enough. Maybe we did so too late. Maybe we didn't make enough homemade purees, favoring pre-packaged supermarket varieties instead. Maybe we never should've let so-and-so watch TV during meal times, even if it was the only way they'd initially eat. Add to that all the third party criticism that can so often come our way, and before we know it, we're keeping toddler food journals or obsessively monitoring our 2-year-old's daily vitamin intake.

The truth is, however, that having a picky eater as your offspring isn't often something to worry about. According to the U.K.'s National Health Service (NHS), "If your child is active and gaining weight, and they seem well, then they're getting enough to eat."

"As long as your child eats some food from the four main food groups (fruit and vegetables; potatoes, bread, rice, pasta, and other starchy carbohydrates; dairy or dairy alternatives; and beans, pulses, fish, eggs, meat, and other proteins) you don't need to worry," NHS adds.

By this standard, Luna's obsession with breaded chicken ticks two of the four boxes of major food groups. As for the other two, she's supplementing with fruit on occasion, and typically drinking milk through the day. Even though she's physically on the small side (25th percentile as per national weight averages), she's never struggled to gain weight or meet her developmental milestones. Chances are, she's just going through a "stage." An annoying stage, sure, but one that most babies and toddlers typically experience despite their parents' best efforts at getting them to eat all manner of delicious meals.

I couldn't tell you how much food I've prepared and wasted in the last five months. How many sweet potato and carrot soups, pasta dishes, minced meat meals, veggie pies, homemade yogurt shakes, or even peeled fruits have ultimately landed in the compost bin because the 20-pound human in my life refused to try them. Or, tried a couple of bites and sips, only to spit it all out in frustration. I couldn't tell you how much money it feels like I've flushed down a drain. How much time and energy has gone into cooking, when I could've been chilling out with some Netflix or, I don't know, having a bath that lasted longer than 5 minutes.

At a certain point, I got tired. I got tired of inputting time, energy, and money into something that wasn't doing anyone any good. Every time I have recently tried to get Luna to eat something new, I always end up in the same place. Baking tray in one hand, frozen nuggets in another, waiting for the oven to pre-heat so I can actually get something in my kid's system.

While it's true that my daughter doesn't have the "best" or "healthiest" diet in the world (if we're defining that by a balance of all major nutrients), I try to tell myself that this won't last forever. It could last several more years, sure, but I've never met an 18-year-old who existed only on nuggets. Despite all manner of mom-judgement that may come my way while Luna's in this stage, I know my daughter is thriving. She's happy. She's rarely ill. She surprises us almost every day with a new word, trick, or habit.

So, who cares if chicken nuggets are her favorite food? Or sometimes, the only food she'll eat in a day? She's enjoying herself living on a dish being served up as a high-end cuisine in restaurants from Seattle to New York, and I'm not going to fight her palate on that one.

More Like This
17 Best Potty Training Products For Toddlers
26 Toddler Lunch Ideas They’ll Actually Be Excited To Eat
Explaining My Terrible Tattoo To My Kids Reminds Me Of What I Owe My Mom
I’m No Singer, But My Children Think I Am