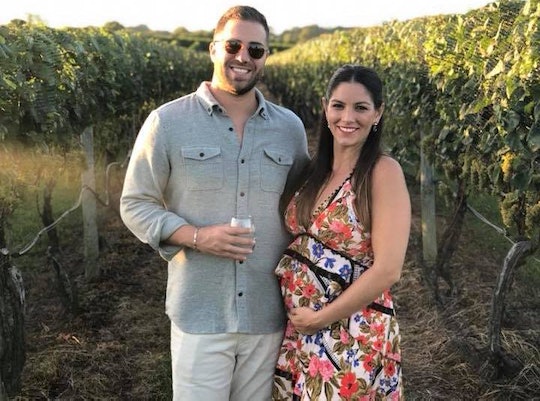 Alyssa experienced a miscarriage during her first pregnancy, and she and her husband are still trying. This is the eleventh installment of her Trying diary. You can read the previous entry here.

This doesn’t even feel like my body. My clothes are tight in areas other than my stomach, and it’s making me rather self-conscious. (You’re bringing life into the world has become a daily affirmation. Okay, you win — hourly.) Was I supposed to embrace this process in its entirety? Hormone changes, weight gain, nausea, mood swings, fatigue? There’s a reason my fertility apps update me each week with additional symptoms; it’s an ever-changing progression. Despite all of these physical, emotional, and mental changes, I’m settling into pregnancy and can honestly say that I’m happy and I can handle them. At times, it’s still overwhelming and incredibly challenging. Not to mention, other emotions are tied to that happiness. I get the occasional, “Oh, you look great!” whether it’s out of mere kindness or from somewhere more genuine, but others’ views of me never really mattered. I've been a competitive athlete for my entire life: feeling uncomfortable in my own skin, imprisoned in what’s starting to feel like an avatar, isn’t something I’m taking to easily.

At times rolling over in bed or putting on pants one leg at a time has me in tears.

For the most part, I’ve had a flat stomach for as long as I can remember — aside from my college fluctuation (thank you Raising Cane’s Chicken and Natural Light beer). This new physique is really weighing on me… yes, pun intended (I’m taking whatever Pyrrhic victories I can). I do my best to keep up with physical training regimen, but it’s difficult and actually painful for days after I run. Lo and behold, there’s a reason for this: the pain is attributed to a mild form of symphysis pubis dysfunction, where the pubic bone becomes unstable with all of the growth and swelling going on in the girdle region. (You’re bringing life into the world. You’re bringing life int—) At times rolling over in bed or putting on pants one leg at a time has me in tears. Running only exacerbates the pain, so I trade in my ASICS for barre socks and a yoga mat.

Being held back physically inhibits me from feeling like myself. Physicality isn't just a part of my lifestyle, it's a monumental part of who I am. I don’t jog listlessly; I tend to go all-out, grueling, panting on verge of exhaustion, otherwise my athletic id isn’t completely satisfied. Altering this is going to take some time. I shift my workout purpose to more of a mental escape rather than a physical feat. Life into the world, life into the world.

At 15 weeks, our doctor has given us the option to have an ultrasound to determine the baby’s gender. In a shocking turn — I know, I’m surprised too — we’ve decided to remain in the dark until the delivery. Keith was hesitant with this decision, but I explained how important I feel it is to find out when we meet our baby, instead of building up a predetermined persona for her/him beforehand. I also loathe the color pink, so what do I need to know ahead of time for? Nursery colors? Frilly clothing with bows? Keith quickly gets on board. I start to picture us in the hospital room the day our child is born. Keith announces the gender and that thought alone seems like the most priceless gift — and one of the only times in life we can be utterly and blissfully surprised. I realize I don’t share the belief of the majority of pregnant couples here. I’ve gotten the looks and scoffs from nail technicians, baristas and estheticians. Everyone is apparently a witch, all telling me what I’m having by staring at my stomach. Creepy.

“Is that caffeine I see you drinking?” The head of HR asks me this while staring down the barrel of my Starbucks cup. I don’t judge the daily lifestyle choices of others, so why is everyone so worried about what I’m putting in my body? Women are expected to have: no deli meat, limited or no caffeine, no alcohol, no Botox or retinol, no raw fish, soft cheeses or eggs, no hot tubs, no Advil… all while taking a pharmacy’s worth of prenatal vitamins. Oh, and we have to ruthlessly adhere to these all while maintaining high performance at work, spousal duties, and a healthy workout schedule. I’m killing myself to do the best I can — and for the record, it was caffeine-free tea. But also, according to the American Congress of Obstetricians and Gynecologists, consuming up to 200 milligrams of caffeine a day is perfectly safe for pregnant women. (The more you know!)