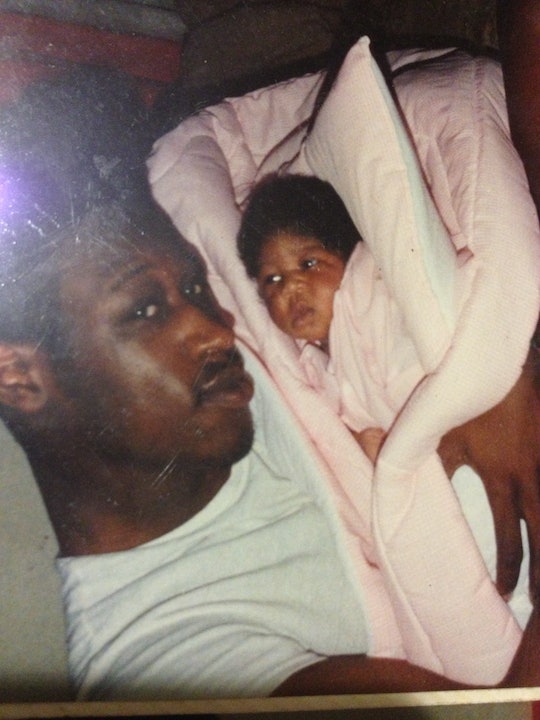 Becoming A Mother Help Fix My Relationship With My Own Father

Standing in the fifth grade grade lunch line, I remember talking to a friend while we waited for our turn to grab our food. I don’t remember why or how the conversation came up, but I distinctly recall her turning around and saying, “Neither one of us have dads, right?” and me replying “you’re right.” That was my normal from the beginning. I watched my single mother struggle day in and day out to provide for me and my brother while I longed for a relationship with an absent father whose face I wouldn’t be able to pick out in a crowd. Some days, I hated him and he was my enemy. I harbored feelings of abandonment and the feeling of not being good enough to stick around for. Other days, I imagined that he was pacing back and forth in his living room holding a baby picture of me, wracked with guilt. Most days, the former out-weighed the latter.

The story of his absence is that he married my mom and they had me. Shortly after, he encouraged her to move out of state with my grandparents while he "got things together," after which he’d send for us. Like a clichéd made-for-TV movie, he never sent for us. By the time I hit my early teen years, my father and I finally met and shortly after, my mom died in an accident and I was shipped off to live with him, states away.

Losing a parent while simultaneously gaining one you have no relationship with was confusing at best; at worst, it was like being forced to smile every day when all you want to do was fall apart and weep until you’ve exhausted your tear ducts and the urge to cry transforms into the urge to vomit.

Getting the one thing I wanted required me to sacrifice the one person I’d always had.

I’d lost a parent and my new shiny father that I’d wanted in my life since I could remember was unsupportive and dismissive of the grief that was swallowing me up. This was the foundation that my father and I started to build our relationship on. It was crumbly, rocky, loosely held together. A picture of him misunderstanding me, expecting me to swallow my sadness and drop myself into his life like a missing puzzle piece that really wasn’t all that important to the overall picture anyway, and me entering puberty and being overcome by raging hormones without my mom by my side. Feeling unheard, terribly sad. Feeling as though getting the one thing I wanted required me to sacrifice the one person I’d always had.

Throughout my teen years, up until I went to college, my father and I never saw eye to eye. He wanted to brush the past to the side and I wanted answers about where he was — I needed him to validate that I was still hurt by his absence for all those years. It was the scientific formula for constant arguing and a stream of unrest between us. For several years, saying I love you to my dad was a struggle because there were scant emotions to back it up. During my junior year of college, after taking a year off from school, I found out that I was pregnant.

I couldn’t allow myself to deny my son the only other maternal grandparent he has on Earth.

Looking back on what I thought motherhood would bring to my life, my expectations included improved patience, a softening of the walls I’d built up, a happiness that would come from a place I hadn’t tapped into yet. What I didn’t expect was my relationship with my own father to improve to where it is today.

The change wasn’t immediate. In fact, our relationship struggled through the first year of my son’s life, and my dad wasn’t even invited to his first birthday party. But, somewhere around my son's second birthday, I felt a shift in my heart and outlook.

Raising my own child put me in the position of a parent and provided me with a perspective I’d never had before. While I couldn’t ever imagine leaving my child for 13 years, I realize that everything isn’t black and white. Being a parent means accepting that life comes with a lot of grey. I will never know exactly why my dad left or how he dealt with it, and while there’s no excuse for some of the things he was OK with doing, I’ve grown a sense of empathy for the young dad he was back then, navigating a world of parenting without his own father to show him how.

As a person that’s lost a parent and deals with sorting out that grief still, I couldn’t allow myself to deny my son the only other maternal grandparent he has on Earth.

I’ll never deny that my dad was a sh*tty parent for a large portion of my life but I’ve watched him be the grandfather to my son that I’ve always wanted him to be as a dad to me. And for that, I am grateful.

I’ve learned over the last five and half years to accept my father into my life with firm, non-negotiable lines that cannot be crossed to ensure we can stay in each others' lives, to ensure he can remain in my son’s life for decades to come. Our relationship as father and daughter could be better, but after spending 13 years not knowing him and four years cutting him off, I am thankful for the relationship motherhood has helped us salvage.