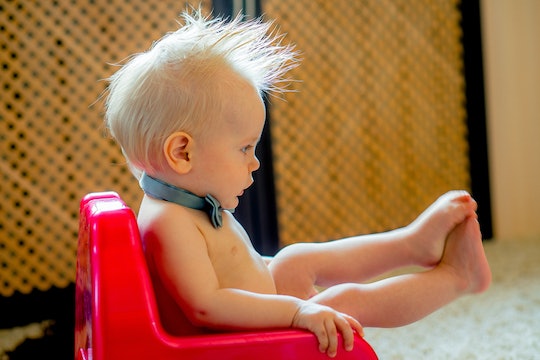 Ask a bunch of moms about the most unexpectedly challenging part of raising a toddler, and probably half of them will groan, sigh, roll their eyes, and say “potty training.” Pose the same question to a bunch of boy moms, and that percentage goes way up — it’s pretty much a fact that getting boys to take their business into the bathroom is harder than it is with potty-training girls.

I have three boys, so I’m something of an expert on overcoming the could-be-an-Olympic-sport milestone known as male potty training. They all mastered the skill at various ages and took wildly different trajectories from Pampers to potty.

But today I stand here before you with three fully potty trained sons (ages 7, 4 and 3). All proud wearers of character-festooned skivvies. All accident-free (most of the time). All able to go out in public without requiring frequent stops at the nearest restroom. How did I get here? What’s my secret?

I did nothing. That’s right. My secret is doing nothing.

Finally, I did something crazy. I quit. I put away the charts and prizes and underwear.

I tried actively potty training my oldest son for at least a year, but it became more of an exercise in frustration—his and mine—than productive work towards a common goal. Before you ask, yes: I tried whichever technique you’re currently thinking of. I did the sticker charts and prize boxes (he didn’t care about either). I sang the songs, made up ridiculous rhymes, and turned it into a game (he asked me to stop). I put on every imaginable combination of diapers, underwear, and pull-ups (all soiled). I attempted the “stay home for three days and let him run around naked” method (he peed on the floor like a puppy).

I rewarded, bribed, cajoled, encouraged, and pleaded. It was messy and stressful. I hated potty training.

Like most parents, I thought this was just part of the process. I thought I had to keep persevering through these challenges no matter what. I worried that my son would go to kindergarten in diapers, and I worried even more that it would be because I had failed to teach him how to master this essential skill.

Finally, I did something crazy. I quit. I put away the charts and prizes and underwear. I stopped wanting him to be potty trained and started waiting for him to want it instead.

And you know what? Two weeks before his fourth birthday, he did. It was literally like a switch flipped inside of him. One day, he did not care enough about potty training to make it happen. The next day, he wanted it. Simple as that. Within 48 hours he was accident-free, using the bathroom and wearing underwear like some kind of potty training rock star, and I had played virtually no part in the transformation.

It was both awesome and kind of... confusing. How much of parenting was like this? (I had clearly been taking credit for some stuff I had no business taking credit for.) How many milestones had happened not as a result of my dedicated parenting, but because something within my child’s own emotional and physical development had been triggered?

I tested out this theory with my second son. I tried potty training him when it felt age-appropriate, but when he wasn’t getting the hang of it, I remembered what I had learned before. I put everything away and stopped pushing him. I quit (again). A few months later, he asked to start using the potty. Three days later, he was diaper- and accident-free. We didn’t need sticker charts or catchy songs or incentives. He wanted to do it, so he did.

I put the little potty seat in the bathroom, showed him what to do, and then left him to it. When he wanted to use it, I encouraged him. When he asked for help, I sat with him.

With my third son, I was able to put this “do nothing” tactic into practice from start to finish. I never even attempted to train him; I assumed he would be well over three years old by the time it happened. So when he started talking about using the potty like his big brothers around two-and-a-half, I just smiled and nodded. I doubt it, but I’ll humor him, I thought.

I put the little potty seat in the bathroom, showed him what to do, and then left him to it. When he wanted to use it, I encouraged him. When he asked for help, I sat with him. When he made it to the potty in time, he got a small treat and loads of high praise.

After a few days of dry diapers, I took a chance and put him in a pair of coveted Paw Patrol underwear. Guess what? We have never looked back.

I don’t know why, generally speaking, it takes boys longer to figure it out. I don’t know why they tend to care less than girls do about running around in dirty diapers. But I do know that when potty training a toddler feels like an enormous hurdle, it’s probably because a parent has projected too many preconceived notions onto their kid about when and how they should master this milestone.

I know because I did it, too. He should be using the potty. All of his friends are trained. I shouldn’t have to change a 3-year-old’s diaper.

But kids don’t do things according to the schedules laid out in the baby books, and trying to make them fit those prescribed molds just means lots of stress (and failure). For my boys, the one and only thing that brought us potty training success was their own internal motivation. They were developmentally ready, they were interested in the process, and they cared enough about the end goal to make it happen for themselves.

If you’ve tried everything with your son (or your daughter, for that matter) and you’re still drowning in diapers, put down the sticker charts and prizes and pull-ups for a while. Leave the potty seat in the bathroom but don’t talk about it unless he brings it up. Ignore the judgers and advice-givers and players of the comparison game.

Do nothing. Wait for him to want it. It’s going to take a while, but once his self-direction kicks in, the whole ordeal will be over in a matter of days. I promise your kid will not go to college — or even kindergarten — in diapers. He will figure it out. And if you’re lucky, you won’t even have to lift a finger to help him (except to wipe his butt, because that skill takes way longer to master).

More Like This
Festive Mommy & Me Holiday Nail Ideas To Try
101 Advent Calendar Activities, From Books To Read To Cookies To Bake
Moms, Just Eat The Fruit Dammit
Real Parents Share What Time They Let Their Kids Rip Into Gifts On Christmas Morning