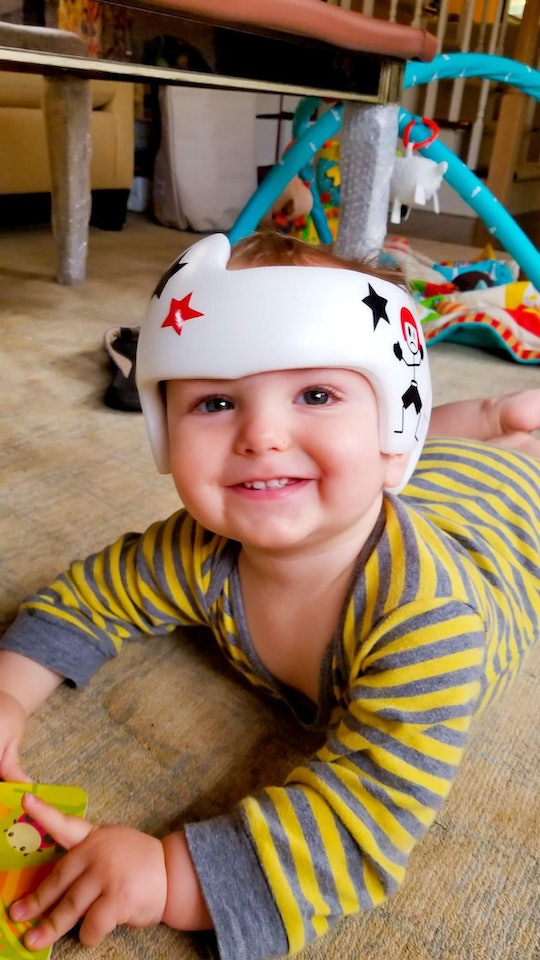 My Son Has To Wear A Helmet & It’s NBD

I first noticed it when I was changing my 8-week-old son’s diaper last fall. “Hey,” I said to my husband, summoning him over to the changing table. “Have you noticed his head is getting flat on one side?” “Hmm…” he said, peering at the baby’s head, which was turned to the right. “Oh wow, yeah, I totally see it. I think it’s just because he always sleeps with his head to the side like that.”

As our adorable baby grinned up at us from the changing table, I was already over the flat spot. Our older daughter had always turned her head to the right as a baby when she slept, and she’s no worse for wear.

“Maybe we’ll just ask the pediatrician about it at his 2-month checkup next week,” I told my husband, and we left it at that.

The pediatrician wasn’t too concerned about the flat spot either, suggesting it could be a mild case of torticollis (a tightening of the neck muscles) that made the baby turn his head like that.

But as 2 months became 4 months, then 7 months, the flat spot on our son’s head was getting more and more noticeable. It looked like someone had ever-so-gently squeezed his head in a vise, but only on the right side. His right ear was even starting to push forward because of it. I didn’t care about it so much from a cosmetic standpoint, but I was kind of wondering if there were any medical issues that come with having a wonky-shaped head. The pediatrician kept assuring us it was super common (which it is, especially since the “Back is Best” sleep movement started in the ‘90s) and only a moderate case, and that it would most likely self-correct. Plus, we had started weekly meetings with a physical therapist to loosen up his neck muscles, and it seemed to be helping his head mobility.

But as the weeks passed, and our son showed no sign of wanting to sleep any other way but with his head turned to the right, we started to get slightly concerned. Would his head be permanently flat on one side? Would kids tease him? Of course, many parents deal with much larger issues than this, so I didn’t want to overthink it; but it was definitely on my mind.

I went to the website later that day and was amazed to see picture of babies whose heads looked exactly like my son’s — truly identical, and their conditions were labelled 'moderate to severe.'

Our physical therapist (PT) mentioned the possibility of our son getting a helmet or a band to make his head round out. I’d heard of helmets, but I didn’t know much about them. They seemed like a hassle, not to mention how uncomfortable they looked. Plus, our PT told us he’d have to wear it all day, every day. Did I really want to make him wear a helmet everywhere and have people wonder what was wrong with him? Plus, he’d recently started sleeping through the night, and the last thing I wanted to do was disrupt his (and, ahem, my) sleep patterns by making him wear a helmet 24/7.

Finally, at our son’s 9-month well visit, we mentioned the flat spot again to the doctor. He still wasn’t concerned, but he gave us the web address of a company that makes DOC bands to correct plagiocephaly (flat head syndrome) in babies. Mostly out of curiosity, I went to the website later that day and was amazed to see picture of babies whose heads looked exactly like my son’s — truly identical, and their conditions were labelled “moderate to severe.”

And, the website mentioned, conditions like his were unlikely to correct themselves. It also detailed issues that might arise in the future, such as difficulty finding glasses and sports helmets that fit properly. Whoa, I thought. Maybe we need to make an appointment for an evaluation just in case. After some research, the only downsides seemed to be a) the cost and b) the possibility that it might not work. So we figured, why not. Meanwhile, I couldn’t help but wonder, What the hell is DOC band?

The baby’s head is measured with 3D imaging, so all we had to do was get pictures taken of our son while he wore a stocking over his head that made him look like a bank robber.

The next week my husband and I found ourselves at the office of the DOC band makers, which is miraculously located about 12 minutes from our New York City-adjacent town. It’s a national company but it only has one location in New York state, and I took its close proximity to us as a good omen. Not surprisingly, our son was determined to be a candidate for a band (which is similar to a helmet but with less coverage on top of the head). They aren’t cheap and we had no idea if our insurance would cover it, but since our son was approaching 10 months old, we had to act fast. The company recommends starting treatment prior to a baby’s first birthday, and it would take about three weeks for the helmet to be custom-made for him. Long story short, we went for it. (Later, we found out our insurance would fully cover it, which was a huge relief.)

The process was fairly simple. The baby’s head is measured with 3D imaging, so all we had to do was get pictures taken of our son while he wore a stocking over his head that made him look like a bank robber. A couple of weeks later, the band arrived. We decked it out with stickers to make it look cool. The people at the office had told us most babies don’t even notice they have the band on, to which I thought, Yeah, right. Plus, he started wearing it in late May, just as summer began and temperatures started to soar into the 90s. Great timing, Mom!! It weighs only about 6 ounces, but I was kicking myself — why didn’t we do this sooner?

The first day was basically a trial day, so he only wore the band for a couple of hours, and he didn’t have to wear it to sleep. I was dreading the next day when he’d have to wear it for naps, and if all went well, for nighttime, too. Was he going to freak out about wearing it to bed? Were we going to go back to the days when we were up three times a night? Would he cry inconsolably and try to rip the band off his head? Umm… no. Not even a little. He slept like a champ the first night and every night thereafter. I daresay he sleeps slightly better and longer now than he used to (but you didn’t hear me say that out loud).

Now after about 12 weeks of treatment, our son’s head shape has vastly improved. Is it all from the helmet or could it be just that he’s growing? Who knows? I don’t care, as long I’m seeing a difference. We still have a few weeks to go, which is the product of waiting to get the band for so long; for babies who get it at a younger age, the treatment time is shorter. But we are so happy with the results. The only downside has been the, um, aroma of the band and my son’s head at the end of a sweaty 88-degree day; it’s like a freaking cheese factory in there.

Aside from that, you have nothing to fear if your baby winds up needing a helmet or band. It’s temporary, and we’ve grown to love our little guy’s cool astronaut hat. It’s possible that we might even (gasp!) miss it a little when it’s gone. Peace out, flat head!

More Like This
When Does A Baby Recognize Their Father? A Pediatrician Explains
Cradle Cap Is Normal & So Is Your Desire To Get Rid Of It. Here’s How
Covid Vaccine “Deserts” For Kids Under 5 Make It Almost Impossible For Parents To Find Shots
Does The FDA's Plan To Limit Lead In Baby Food Go Far Enough?
What Parents Are Talking About — Delivered Straight To Your Inbox