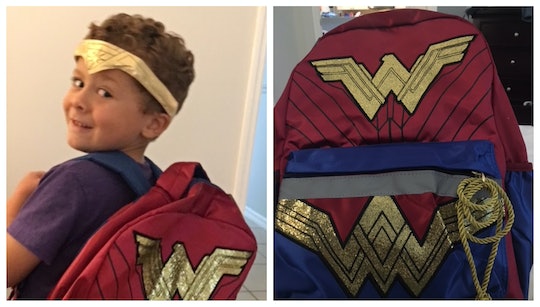 Most parents believe in supporting their children's interests and in breaking down gender stereotypes, but one mother sees how hard it can be to go against the grain.

My 5-year-old, Isaac, is very excited to be starting kindergarten in a few weeks. Since he has been asking me the moment he wakes up every morning if it’s the first day of school yet, I thought a trip to buy school supplies would be fun. When we arrived at the store, I handed him the list and helped him find everything he needed. I told him he could also pick out a brand new backpack, so he excitedly ran up and down aisles lined with every kind of backpack imaginable. I thought he would have a hard time choosing because when I ask him his favorite color, his response is always “all of them.” But he immediately knew the one he wanted.

I’ll be honest, my first response to him was, “Are you sure?” Without skipping a beat, he replied, “Yes, I looked at all of them and I love superheroes the MOST and this Wonder Woman backpack is my favorite! It has a CROWN, Mom! IT’S PERFECT!” As he held it in his hands and ran his fingers over the golden sequined Wonder Woman emblem, I saw the look of utter joy on his face. I smiled, told him I loved it, too, and we put it in the shopping cart.

When we got home Isaac immediately put his backpack on along with the Wonder Woman crown and excitedly showed his dad and 3-year-old brother, who also loved it. The boys played Batman and Wonder Woman until bedtime.

I admittedly have some fear for my sweet Isaac. For how the world can treat someone who doesn’t easily fit into stereotypes or who blazes their own path instead of following everyone else. After he chose the Wonder Woman backpack, I asked if he was sure, not because the backpack bothered me, but because I imagined Isaac being made fun of at a new school when he has been so desperate to make new friends. We recently moved from North Carolina to South Florida and Isaac has had to start over in making friends.

Why are we trying to get our boys to live in a muted world of blues, browns, and greens, where it’s fine if they play with guns and trucks, but not with Barbies?

I love that when Isaac thinks of superheroes he thinks of Wonder Woman. We have tried to show our boys that even though men and women and boys and girls are different in some ways, there are many more ways in which they are similar which can include their interests, clothing preferences, favorite colors, hobbies, careers, and which toys they like to play with. There are so many wonderful new books and TV shows which feature strong, intelligent, capable, and heroic girls and women, and therefore our boys have the opportunity to grow up being exposed to messaging about women that is empowering instead of diminishing. I was happy to know our efforts have worked and Isaac doesn’t see Wonder Woman as an inferior or weaker superhero, but just as awesome and amazing as the rest of them.

When we tell our boys that liking things that are stereotypically for women makes them somehow weaker or make fun of them for liking it, they begin to hear the message that women are weaker and less than. If we are willing to pause and think about it, it really is quite silly to imagine that little children of all genders wouldn’t like sparkly, colorful, shiny things. So why are we trying to get our boys to live in a muted world of blues, browns, and greens, where it’s fine if they play with guns and trucks, but not with Barbies? My husband, Tony, and I have worked hard to make sure the boys are able to follow whatever interests them regardless of stereotypes or gender roles. Isaac and his little brother show us what they like instead of the other way around.

Isaac loves to dress up like a princess sometimes and wear shiny jewelry, but he also loves to dress up like Batman and fight the bad guys. His little brother loves anything and everything that has an engine: cars, trucks, fire engines, police cars. If it has a siren or big tires, he loves it. While his interests lean more toward things are stereotypically for boys, that is great with us. This is what he is interested in and we want to encourage him to follow his interests just like we do Isaac. We do our best to not limit our boys and to help them navigate confusing messaging they see and hear about what it means to be a girl or boy in this world.

It hasn’t been easy for Isaac, but he has been looking forward to being back in school. It crushes my heart to imagine kids making fun of him, but as much as I want to protect Isaac from the world, I want to confidently release him into it even more.

The truth is, if I start to worry about what the world thinks, Isaac will start to worry too and I don’t want that. Isaac is a world-changer and I can’t wait to see what the future holds for the coolest kid I know.