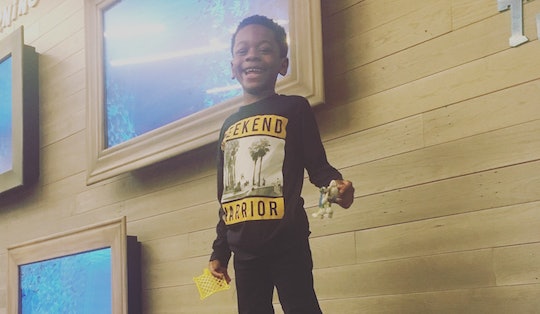 My Son Met His Dad’s Girlfriend & TBH, I’m Freaking Out

Every Sunday, after my son comes home from his dad’s house, I talk to him about what he did and how his weekend was. He usually rambles on with half stories about going to the park or the workout place or an in-depth recap about what they ate. This past Sunday, the conversation was different. While laying on the floor and squirming around, my son said, “I met daddy’s girlfriend. She’s nice. She had a white face, a ponytail, and a black t-shirt”. That was it. There was nothing else to the story and he seemed unaffected by the encounter. He said it like he’d just met a bus driver or a new counter clerk at the gym. Thankfully, I’d attempted to mentally prepare myself for this moment for the last month. But, I don’t think there is anything that could prepare me for how I’d feel when the time actually came for my son to meet his dad’s girlfriend.

When my ex and I broke up, it was not abrupt or unexpected. Our relationship had been dead and hanging on by a fragile thread for years before it finally snapped. When he moved into his own place and out of the home we’d shared with our son since he was born, it was a rough transition. I had to learn how to survive mentally, financially, and emotionally on my own and my 4-year-old, at the time, had to wrap his brain around the fact that his dad moved out of our home but not out of his life. The latter nearly broke me.

It took months for my son to adjust — to stop hysterically crying every time his father came to pick him up. I don’t think either of us, his dad or me, anticipated how affected our child would be. After we officially ended our relationship, my ex started a new one with his current girlfriend. It wasn’t a secret and I wasn’t bitter. But, for the last year and a half, his relationship with his spouse has been isolated. His role as father to our son and boyfriend to his girlfriend had never overlapped which, I can admit, has been a relief. Thinking back to how horrific it was for our child when we ended our relationship and moved out, I couldn’t stomach putting him through another major change like that.

One afternoon, during a drop off, my son’s dad said it was time to talk about That Which Shall Not Be Named – his girlfriend meeting our son. As the words left his mouth, my stomach sank into the tips of my toes. In an instant, I felt like the sense of normalcy I’d spent the last year and half trying to build up was starting to crumble.

My son still asks for his daddy to come live in our apartment and tells me he wants us all to be together when he wakes up in the morning. He couldn't possibly be ready to meet someone that could possibly be a step-parent one day, I worried. In that moment, it took everything in me to swallow my feelings and say OK.

I would be lying if I said that my concern was solely for my son and how he’d react to a new person being introduce into his family. After putting my son to bed that night, I sat on my couch and cried like a kid that just found out Santa wasn’t real way too soon. I knew this time would come even if it were with another spouse and not this girlfriend. There would be another woman, eventually. My tears came from a sudden sense of inadequacy and fear. These questions and possibilities flooded my brain like what if my son likes being with them more than me because they are a complete family? What if she replaces me as his mom? What if my ex and his spouse try to push me out? What if they try to attack me for sole custody because I am a single parent and they have a family, something I can’t provide?

Like other moms out there, I’m not a perfect parent by any means. Imagining another woman coming in to essentially take a bite out of my role as mom made my parental insecurities erupt from a dark place. I was flooded with the feeling that I was not good enough and replaceable. My ex said the meeting would happen in a few weeks and I looked forward to that day like the end of the world.

The day has now come and gone and hearing my son casually talk about meeting his dad’s new girlfriend was reassuring. I was happy to hear him slip that part of his weekend in like it was special enough to mention but not confusing or upsetting.

Being on the other side of it now, I feel more secure that I will never be replaced. There was no magic performed or special potion sprinkled over the situation — I will still have to get used to it all. But I am closer to knowing in my bones that my place in my son’s life is not fleeting. In spite of my imperfections, I am still his mother — and that is something no one else can change.