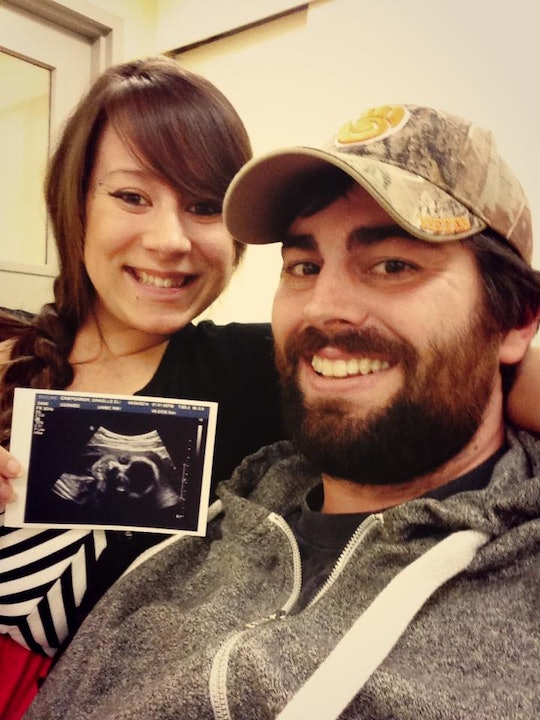 My Son Was Misdiagnosed With Down Syndrome & It Was Terrifying

So much of your pregnancy is spent planning. You plan your child's birth and hope you're able to follow it through exactly the way you've dreamed. You plan the baby's room, decorating and picking out color schemes and stacking diapers upon diapers. You plan a baby shower and a route to the hospital and a labor playlist. My partner and I spent a borderline ridiculous amount of time planning for our expanding family, but we couldn't have possibly planned for our son's Down Syndrome misdiagnosis.

At the time, we were antsy and excited to have our 12-week ultrasound. It was the first time we'd be able to see our baby look like a tiny human and not an alien bean. We had yet to announce our pregnancy to friends and family (minus a few close loved ones), so we were anxious to get a good report and let our world know we were going to have a family.

I remember the first time I saw our child move and kick and hiccup. He was small, but on a tiny screen he looked like he was ready for me to hold him in my arms. I prepared for the cold gel the ultrasound technician put on my stomach. I prepared for the gentle push of the transducer onto my stomach so the tech could see a head or a foot or a small, beating heart. I prepared for the measurements so the doctors could determine if our "alien bean" was on track to grow into a healthy baby. It was all going according to plan. I held my partner's hand and stared at the beginning of our future, overwhelmed with gratitude.

Then the doctor came into our room. Followed by another doctor. Then a nurse. Then the head of the department. I remember the look on the first doctor's face as she told me that the ultrasound technician had uncovered a potential problem. They explained that our child's nuchal fold, or the fluid at the back of the baby's neck, was developing far too thick, a possible indicator of Down Syndrome.

Options were laid out for us and newer, scarier plans were put into place. We met with a genetics counselor and went over our family histories, a difficult task as I don't have a relationship with my father and my partner doesn't have one with his biological father. We scheduled a Chorionic Villus Sampling (CVS), a test that detects abnormalities in the fetus and involves a large, intimidating needle being driven through your stomach, placed mere inches from my baby. We attempted to map out other possible plans, if the test should confirm what the ultrasound discovered and our baby did have Down Syndrome. Would we continue with the pregnancy? Would we terminate our pregnancy? What would we tell the close friends and family members who knew we were pregnant? What would we tell ourselves?

We had one plan before that ultrasound, but when we left, we had several. And, as it turns out, none of them were actually needed.

The horrifying CVS procedure came back negative. Our baby had the correct number of chromosomes and, to my partner's absolute delight, he was a boy. We then planned to have his unbelievably small heart examined by a neonatal and fetal cardiologist, as we were then told that a thick neck could also be a sign of multiple heart defects. We prepared ourselves for the possibility that our son might need to be rushed into surgery the moment he was born to repair a valve or patch up a hole. We prepared for the possibility that he might not live outside of the womb at all. But two separate two-hour, in-depth ultrasounds revealed that our son's heart was completely normal.

We could have been upset. We could have voiced our anger and frustration with the doctors and the ultrasound technicians. But in the end, we were simply grateful.

Finally, another ultrasound revealed that our son's neck was measuring completely normal. He'd been misdiagnosed at 12 weeks, setting in motion numerous (and expensive) procedures, some of them physically painful and all of them emotionally taxing. The doctors provided no explanation as to how such a mistake could have been made. What they told us essentially amounted to, "Well, these things happen."

We could have been upset. We could have voiced our anger and frustration with the doctors and the ultrasound technicians. But in the end, we were simply grateful. Sure, we had to do some additional planning and think about worse case scenarios and prepare ourselves for plans we never imagined contemplating, but we were lucky. So many parents don't get that luxury. So many walk into an ultrasound with a specific plan, only to see it fall apart. Our misdiagnosis changed everything, but our everything wasn't forever changed.