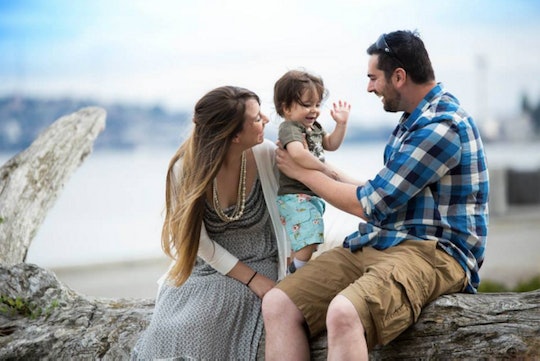 How My Abusive Dad Shaped My Own Parenting

The prideful part of me would like to think I’m hardly, if at all, influenced by my parents and the environment in which I was raised. It’s the same defiant part of me that thinks that third trip to that all-you-can-eat Thai buffet is a good idea, and the same one that believes another round of whiskey doubles never hurt anyone. The truth is, I have been molded by my parents, their relationship, their parenting choices, and — perhaps most importantly — their spectacular failures. And more than that, having an abusive parent has made me a better mom.

And I never fully realized this, or, more accurately, I was entirely unwilling to admit this, until I became a parent myself. When you stare into the eyes of the human you created or you bury your nose in the soft parts of their baby-fat neck or smell the top of their newly-bathed head, you’re weighted with the utter complexity of every decision you've made about parenting up until this point — decisions you chose, your parents chose, and even your parents’ parents chose. So, the honest part of me has to admit that my childhood has influenced my parenting in ways I couldn’t have possibly fathomed. The honest part of me has to admit that I’m afraid to discipline my child because my father was abusive.

In my home, when a firm “no” is met with defiant giggles, I am stuck, awkwardly unsure of how to convey authority in a way that won’t be misconstrued as hatred or cruelty. I’ve argued with my partner about disciplinary techniques, and how unsafe actions, like running towards a road or trying to touch an outlet or reaching for a hot stove, should be handled so that the worst of the absolute worst doesn’t occur. My partner grew up in a healthy, happy, loving home. I grew up in a hateful, scary, abusive home. And so the thought of lying even a well-intentioned, disciplinary hand on my child sends the same shivers down my spine that I knew all too well as a child.

I’m afraid to get married because my parents were so miserable in their own. Promises made in a sanctuary in front of friends and family kept my mother in an unhealthy relationship with a man who didn’t respect her, cherish her, or care for her. I fear that, one day, I could be like her: shackled to an unhappiness that gave her little to smile about because promises are promises and they should be kept. I’m afraid that I’d force my child to grow up in an unhealthy environment, because divorce is still considered a four-letter word.

I’m afraid of saying “no” to my child when it’s met with vicious screams and heartbreaking cries. My first memory is one of fear: I was running down our living room stairs and away from my father, who was furious for reasons I cannot recall. He caught up with me on my way to our back porch and beat me until I urinated in my pants. And while I know my son will never experience anything remotely like that, I yearn for his first concrete memory to be of the love and laughter and a warmth only a family can provide. But what if it isn’t? What if his first memory is of unending tears because his mother was mean and firm? What if he remembers sadness instead of merriment? What if he recalls despair instead of delight?

I’m afraid of giving my child too much space out of fear he’ll think I don’t care at all. We co-sleep and hug and kiss and are constantly affectionate, because I saw the violent end of too many fists and pushes and hurtful words. I shower my son with an overabundance of love and praise because I was called a “whore” instead of “darling,” and was told I was “stupid” instead of “smart.” I am acutely aware of the power a simple touch or gentle word has on a malleable mind, so my touches and words overcompensate.

Even so, I am afraid.

I spent the majority of my childhood scared — scared when my father came home from work or when my mother cooked a meal or when I disagreed during a football game or when he’d yell at my her in the middle of a violent night. And now I am terrified of the what ifs: what if my son experiences a minuscule version of that childhood, the one I am proud to say I survived? What if he remembers more fear than happiness, more pain than pleasure, more heartbreak than happiness? What if my son has a child of his own and, when looking back at his life, cringes at the thought of his childhood?

Then the prideful part of me kicks in, in spite of all those fears. The part of me that will take that third trip to the Thai buffet; the one that will order another double whiskey after a particularly trying day. It’s the same part reminding me that while I am the byproduct of my parents, I am not the byproduct of their story. I have the freedom to decide how and when and why I parent the way I do. I have a choice. And in those small moments, I am grateful. Grateful to know better. Grateful to choose better. Grateful that my abusive father helped me, however unknowingly, become a better mom.