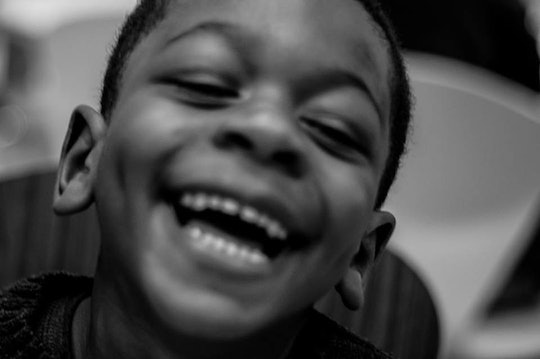 The Important Reason Why I Chose My Son's Name

Growing up, I hated my name. It was long and difficult for people to pronounce, and I thought that my parents were unbelievably cruel for giving it to me. The first day of school was always filled with anxiety, because I'd constantly wonder if my teachers, who were used to names like Ashley, Stephanie, and Brittany, would get my name right. As my teacher went down the attendance list, the moment she pulled the sheet away from her face and started furrowing her brow, I knew my name was next on the list, and she was struggling to pronounce it.

Worst of all, I felt like the name Latifah was loaded with negative stereotypes associated with blackness. I was worried that people would look at my name and assume that I was black, ghetto, and low-class. People would make fun of me for having a name that "sounded too black," and they warned me that it would prevent me from finding employment in the future. I swore that when I was old enough, I would head down to the courthouse and demand an immediate name change to something refined and simple, like Amy or Kim.

A few years later, I had a son. At that point, I no longer feared that my name would hold me back from my dream job, or that people would be unable to pronounce it. In fact, my name gave me a sense of pride. So when it came time to name my son, I didn't want to whitewash his name to protect him from discrimination. Even if people don't immediately realize it, I gave him a name that was important to me because it reflected his heritage.

At first glance, my son's name, Miles, is not an overtly "black" name. It doesn't ring any bells when it's seen on an application, because its origins are fairly ambiguous. (In fact, it comes from the Germanic name "Milo," which is associated with the Latin term for "soldier.) But I chose that name for my son because it is my family's name. It is a reflection of his heritage. I did not want to allow racist stereotypes and fear of judgment to steer my decision.

When I found out I was having a baby boy, I was bombarded with advice that I shouldn't “name him anything non-traditional" or "ghetto." What they meant was I should give him a name that could pass for white on a job application or college entrance essay. Hearing that brought me back to my own childhood insecurities about my name, and I didn't want my son to feel the same way I did.

Yet when I told people the names I'd been considering, which were names like Benjamin, George, and Lawrence, they were surprised. They asked me why I wanted such basic names, as opposed to something more "ethnic." I felt like I couldn't win: people were either judging me for choosing a name that was "too black," or judging me for choosing a name that wasn't black enough.

Unfortunately, the truth is that my childhood concerns about my name weren't totally unfounded. Several studies have concluded that job applicants with "whiter-sounding names" are more likely to be considered over applicants with "blacker-sounding" names, regardless of their education or experience level. Although there are laws in place preventing employers from discriminating against applicants of color, such discrimination is difficult to prove. Our names affect every aspect of our lives, and unfortunately, this applies doubly to people of color.

I chose a name that was meaningful to me, regardless of the racial assumptions or implications that might come along with it.

So when it came down to choosing a name for my son, I chose a name that was meaningful to me, regardless of the racial assumptions or implications that might come along with it. I didn't care about how it would be seen by the rest of the world.

The name Miles doesn't immediately evoke images of a black man, but I didn't choose it because I thought it would make his life easier, or so people could treat him better because they'd assume he was white. I chose it because it was my family's name, and I wanted him to carry a piece of my family history with him for life. Had my last name been Jaquan, I still would have chosen it.

The world is not a fair or kind place, and my son will likely face discrimination for the rest of his life. His name won't change that. And if a potential employer or college admissions committee doesn’t want to get to know him based on his race, then he doesn’t need to grace them with his excellence anyway.