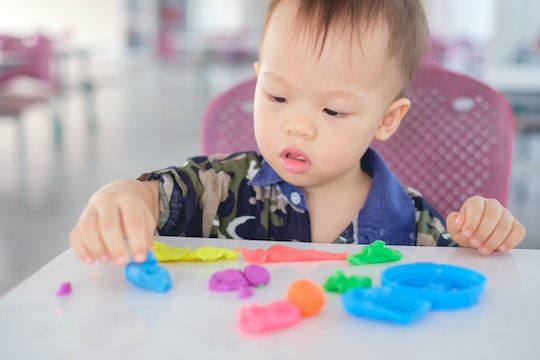 My Toddler Ate Play-Doh, What Happens Now? Don't Freak Out

Kids eat weird stuff all the time, and parents have to figure out when it's actually a problem. For instance, what should you do if your toddler eats Play-Doh? Here's what experts have to say about this very common rite of passage for many kids.

In most cases, a little modeling clay taste-test isn't a huge cause for concern. "Eating Play-Doh is relatively harmless," pediatrician Natasha Burgert, M.D. tells Romper. This is especially true for the stuff you buy from a store.

"In general, Play-Doh is considered to be minimally toxic IF it was bought from a store (commercially available). The commercially available forms of Play-Doh consist of clay," Kelly Johnson-Arbor, M.D., medical toxicologist and co-medical director at National Capital Poison Center in Washington, DC., tells Romper. "Clay is not absorbed by the body, so it has minimal toxicity."

For the most part, parents can take a "wait and see" approach. "What we recommend from the poison control center is to observe the child and give food and drink as normal. If they tolerate that and are behaving normally, we know everything will be fine," Diane P. Calello, M.D., Executive and Medical Director for the New Jersey Poison Information and Education System and Associate Professor of Emergency Medicine at Rutgers New Jersey Medical School, tells Romper.

However, a few ingredients in commercially available Play-Doh could present an issue for certain individuals. "Some formulations do contain gluten and would be more problematic for children with Celiac Disease," says Dr. Burgert. If your child does have a gluten sensitivity, then check the label on your brand of modeling clay. "Some children (and adults) might be allergic to the various agents used to color the Play-Doh, so this could also be a concern," says Dr. Johnson-Arbor. If your kid shows any signs of an allergic reaction after eating Play-Doh, then contact a medical professional right away.

Also, consider the amount of Play-Doh your kid gobbles down. "Large quantities would certainly upset a child's stomach and may cause some vomiting," says Dr. Burgert. Other signs of stomach distress could also occur. "Ingestion of larger amounts of commercial/store-bought Play-Doh would likely result in more minor symptoms of nausea, vomiting, abdominal pain, constipation, and/or diarrhea," says Dr. Johnson-Arbor. Again, if your kid is showing any symptoms that cause concern, call your pediatrician ASAP.

In addition, there are plenty of homemade play dough recipes that could contain potentially risky ingredients. "There are recipes available online for play dough, and these often contain high amounts of salt. Salt ingestion can be poisonous for humans and pets, and there is at least one report of a toddler who experienced life-threatening elevated sodium levels after eating homemade play dough," says Johnson-Arbor. If your kid is already going to nibble on the stuff anyway, then consider choosing an edible play dough recipe to stay on the safe side.

Speaking of which, how do you prevent a toddler from chowing down on stuff that isn't food, anyway? Even the experts admit that this is a tough goal. "Preventing a toddler from eating non-food is tricky, especially because they put everything in their mouth! Keeping 'edible' non-food items, like Play-Doh and small toy pieces, within sight of the parent can be helpful," says Dr. Calello. It's totally fine to hold off on these types of playthings until your child is past the "chew on anything and everything" phase. "If a child is unable to play without repetitively putting play dough in her mouth, then it's likely time to put the play dough away until she gets a bit older," says Dr. Burgert. One day, your kid will be old enough to enjoy creating fun dough sculptures without trying to gnaw on them in the process.

More Like This
Why Do Toddlers Throw Themselves On The Ground During Tantrums? They Have Their Reasons
What Is Acid Reflux Tape? Chrissy Teigen Swears By It
30 Great Non-Toy Gift Ideas For Kids
Thanksgiving Recipes Perfect For Little Helpers