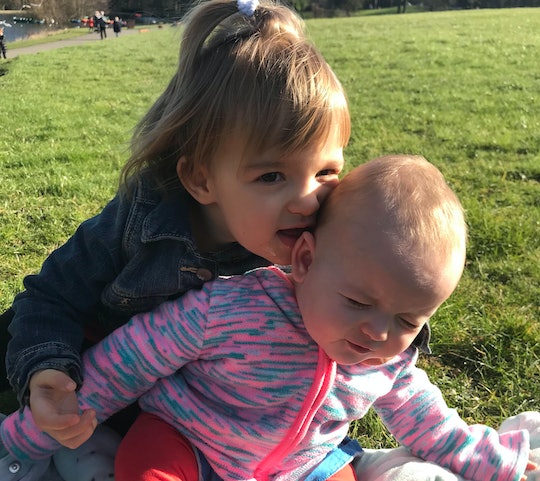 In the first few weeks after having a second child, I thought I had hit some kind of supernatural jackpot. Upon introducing my toddler to her little sister, she seemed instantly enamored. Luna, my oldest, couldn't stop kissing Elia, our new baby. In fact, the moment she first saw Elia in the hospital was as dreamily chilling as any rom-com meet cute. My husband and I could feel the love in her eyes; it was as though we were witnessing a bond so seemingly innate that no words could ever quite describe it. What no one prepared me for came later: my toddler started to hit her baby sister, and I didn't know what to do.

I had spent most of my second pregnancy worried. Having heard all about my nephew's struggles when my baby niece was introduced into the picture, I knew I could probably expect some new behaviors from Luna. Extra clinginess was something that came up a lot. My head midwife also warned me about potential regression. Luna might suddenly want to be fed instead of eating by herself. Her sleep pattern could deteriorate. She might even want to breastfeed again, despite being weaned for several months.

So, I knew to expect regression. I expected clinginess. I expected Luna to want to join in on nursing sessions. I expected temper tantrums if ever she was feeling neglected.

For a couple of weeks after Elia's birth, however, there was none of that. Luna was curious and gentle. She wanted to share her toys with Elia. She liked to cuddle up beside her in our big bed.

Until, one day, we were face to face with more aggression than we'd ever thought possible from our sweet little girl. I never could've imagined that Luna would push, hit, slap, bite, whack, scratch, or generally try to squash her baby sister — but it happened. And seven months into Elia's life, it's still happening.

"Aggressive responses are very common," board-certified pediatrician Dr. Smita Malhotra tells Romper. "Remember this is how toddlers deal with their big feelings when they are unable to manage them."

I will admit that had I done more research into a toddler's potential reactions upon meeting their new baby sibling, I might have been a little more prepared for Luna's demonstrations of violence. According to What to Expect, "acting rough with the baby" is just as usual a response as showing regression or anxiety might be.

Their grief over the thought of possibly losing that unconditional love is so overwhelming to them that they deal with these big emotions through aggression.

The fact that the behavior is commonplace doesn't often make it any easier to deal with, though. Parents may find themselves torn between wanting to save their new baby from getting hurt, and subsequently reprimanding their toddler for getting physical, while also wanting to ensure their toddler does not feel unloved or mistreated.

There are parts of me that want to yell at Luna when she injures Elia. I have tried time-outs. I have tried removing her from the situation entirely, creating physical distance between her and her sister after there's been an upset. My husband and I have tried going quiet and serious — not screaming at our daughter, but showing disapproval through our silence instead. She is only 2 years old, though, and nothing seems to work. It's as if she's experiencing a disconnect between her actions and our reactions, as yet unable to comprehend why one thing has led to another.

Dr. Malhotra advises parents to "remember that, for children, behavior is a form of communication. So when our toddlers act out, they are communicating to you their feelings of fear and sadness of losing their place in the family."

"In fact, their grief over the thought of possibly losing that unconditional love is so overwhelming to them that they deal with these big emotions through aggression," she adds. "While it can definitely be hard in the moment, if we can see our toddlers through the lens of understanding that they are trying to communicate their feelings to us, then we can respond with empathy instead of frustration."

It has been my experience that responding with empathy isn't always instinctual when someone has caused your baby physical harm, even if the person doing it is also your child. The guilt that I feel whenever I have raised my voice at Luna, however, is probably proof that it's worth trying to reframe my perceptions of and reactions to the situation.

Although her language and ability to communicate are improving every single day, it would be wholly unfair to expect Luna to behave the way an adult behaves. It would also be unfair to expect her to understand all of my verbal reassurance. I can spend all day telling my first-born that I love her, that she is important, that she is not second-best to our baby, but she cannot grasp the profoundness of those words at this time.

Instead, actionable reassurance might be the best way of preventing aggressive outbursts in the first place.

The more informed I have become about toddler development and the introduction of new siblings, the more at ease I feel.

"One of the best things that parents can do is to provide validation," Dr. Malhotra explains. "All of us want to be seen, heard, and understood — and by validating a child’s feelings, we show that we acknowledge them."

If your child is too young for verbal validation, she suggests "that each parent spend some quality time alone with the toddler each day. This way they see that even though there is a new baby in the family, they still have some time during the day with [each parent] to themselves."

Setting aside this kind of time isn't always straightforward, of course. So many of us balance parenthood with other responsibilities, be it our professions, managing our homes, or trying to find some semblance of alone time. In truth, though, my husband and I have both found that Luna is far less frustrated when we do manage to give her that one-on-one attention.

I don't feel like there's anything wrong with Luna, other than simply missing her parents.

This could manifest through something as simple as taking her for a play in the park, reading her a book without Elia in the room, giving her a bath by herself, or simply snuggling up to watch Frozen (again) while the baby naps. Luna cannot fully understand our words when we tell her that she is valued, but she can definitely pick up on any efforts we make to prioritize her fully (even if only for a little bit).

Sometimes, it's immensely difficult not to hyper-analyze your toddler's aggressive actions. I know I've found myself deep inside anxiety loops, wondering if I had another child too soon, berating myself for potentially scarring Luna for life by "abandoning" her, chastising myself to the core every time I have yelled at my toddler for acting out, or simply screaming into the metaphorical void for failing to provide me with any practical solutions to these struggles. Sometimes, I even wonder if there are other things going on here; if Luna's violence really is "normal" or if there's something seriously wrong going on inside her beautiful mind and heart.

According to Dr. Malhotra, there are definitely times when seeking professional attention is worthwhile, particularly "when a child is causing considerable physical injury to others, being sent home from daycare or school, or when parents are finding it hard to emotionally cope through [their] behavior."

It's ultimately up to all of us as parents to deduce whether we think the aggression is "too much," but I know that the more informed I have become about toddler development and the introduction of new siblings, the more at ease I feel. We still contend with whacking and biting and even aggressive affection (whereby Luna just wants to hug her sister, but doesn't yet know her own strength) — but I don't feel like it's my fault anymore. I don't feel like I'm some kind of monster mom. I don't feel like there's anything wrong with Luna, other than simply missing her parents.

She's just a toddler, after all — a 2-year-old coping with too much of too many emotions. Thankfully, there are brief moments of serenity that help along the way. Once in a while, Luna will go to Elia and give her a kiss without being prompted. She will cuddle her sister with sheer tenderness. She will share her favorite toy or preferred type of snack. And, even if only for a minute, my husband and I will witness the same bond we felt in the hospital all those months ago. The inexplicable, overwhelmingly mysterious connection between a couple of sisters.

More Like This
Here’s Why Toddlers Sometimes Cry So Hard They Throw Up
Why Do Toddlers Line Up Toys? Experts Explain This Classic Toddler Behavior
Why Do Toddlers Throw Themselves On The Ground During Tantrums? They Have Their Reasons
When It’s Safe To Bring Your Newborn To A Restaurant, According To A Pediatrician