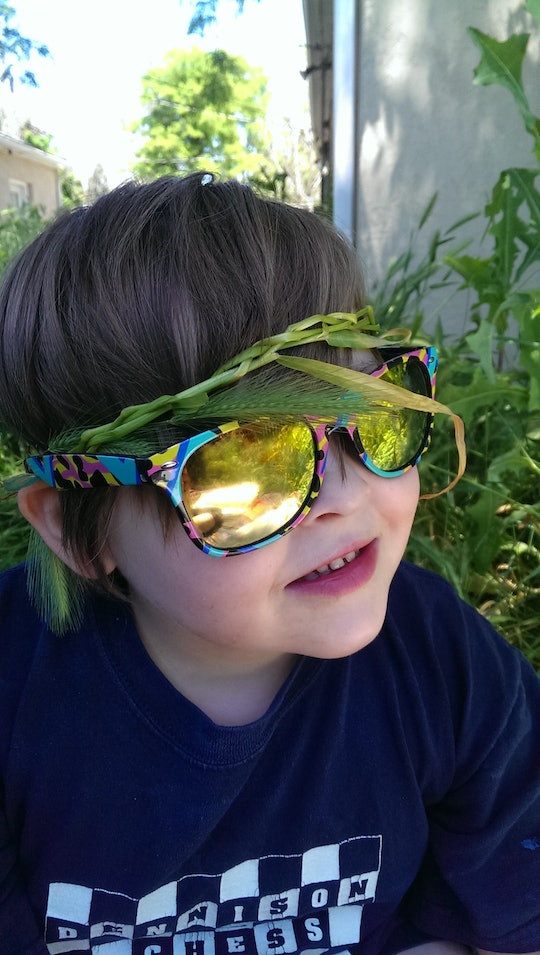 My Trans Son Isn't A 'Disruption,' He's A Goddamn Human Being

When President Trump was elected, I worried about what his election meant for my transgender son. As the weeks since his inauguration have ticked by, I've only gotten more angry and uneasy. This feeling peaked on Wednesday morning, when Trump continued his efforts to roll back LGBTQ rights by announcing he would be banning transgender people from enlisting in the military. As the parent of a transgender child, Trump's trans military ban terrifies me.

In 2016, President Barack Obama reversed a preexisting ban on transgender people serving openly in the military, a policy that was effectively reversed by Trump's tweets from this morning. Trump's reasoning for rolling back the Obama decision is different than what he gave for the school-wide protections. He doesn't want to give states control over transgender rights. Instead, he is barring transgender people from the military, a federal institution, because he claims that trans people are an expensive distraction.

He is assuming that all transgender people are undergoing medical transitions (which is not the case), and that those medical transitions are costly (which is also not the case). He is also assuming that cisgender troops will be unable to get past the idea that they are serving alongside a transgender person. But if this is, in fact, true, is this transphobic attitude something we want to encourage? Or is this something we want to change?

This is the kind of argument and language that leads transgender youth to attempt and commit suicide. These messages leave deep scars.

The re-implementation of a ban on transgender military personnel also ignores the fact that trans people have always been in the US military. Recently, a veteran from WWII came out as transgender. A ban on transgender military personnel would bring us back into the dark days of "don't ask, don't tell." This leaves trans people with a horrible choice: they can live in the closet and go into the service, which would likely result in gender dysphoria and being called by the wrong pronouns and by a name that psychologically cuts like a knife; or they can go into the service and try to pass, jumping through hoops to try to keep the fact that they are transgender under wraps. Neither option is a good one for transgender people, who are prone toward anxiety and depression as is.

Trump's policy reversal will have a devastating effect on the thousands of transgender service people in the military right now. But it will have devastating downstream effects on transgender youth, too. Trump is sending my transgender son the message that the fact that he is transgender is strange and discomfiting. He is saying to my son that he is unfit – not only for military service, but also to be among cisgender kids at school. He is saying that my son is not a boy, with the rights of a normal human boy. In the eyes of the President, my son is a transgender. And this is terrifying.

The idea that trans people are unfit to serve alongside cis people implies that they're not really men or women — they're just pretending to be either one.

This is the kind of logic that is devastating to transgender people. The idea that trans people are unfit to serve alongside cis people implies that they're not really men or women — they're just pretending to be either one. This implicit undermining of transgender soldiers' gender runs throughout Trump's reasoning for excluding them from active service, and it's also exactly what I, as Arthur's parent and advocate, fight against every day. This is the kind of argument and language that leads transgender youth to attempt and commit suicide in disproportionate numbers. These messages leave deep scars.

When it comes down to it, I don't think my son would ever really want to be a soldier. He's a gentle creature. When his friends start to fight, he's the one that steps in and mediates. But I also don't want the President of the United States prescribing what he can and cannot be on the basis of the fact that he is transgender. That is oppression. That is stigma writ large, and I can't help but wonder what next basic thing will be taken away from him before he's even old enough to consider the consequences.

More Like This
The Covid Vaccine For Kids Under 5 Has Been Sent To The FDA For Review
How To Properly Clean An Inflatable Pool
Tick's Head Gets Stuck Under Your Skin When You Were Pulling It Out?
WowWee’s New Fairy Finders Will Keep Kids Distracted For Hours