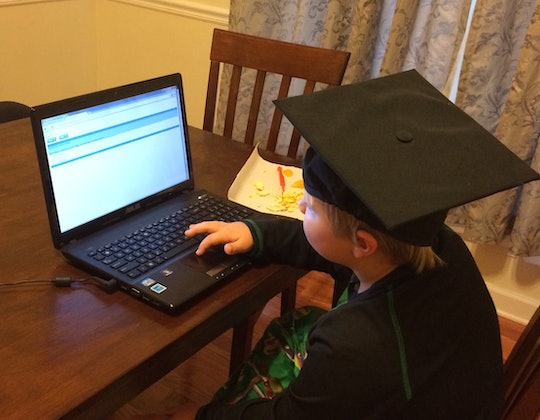 I remember the first time the school called to tell me my 6-year-old son had an accident. It was one week after he socially transitioned. I asked him why he waited so long to go, the bathroom was right outside his second grade classroom. My 6-year-old trans son told me he wasn’t allowed to use those bathrooms. He had to cross the entire length of the school to get to the principal’s office to use the single stall, gender neutral private bathroom. And when you’re 6 years old, you wait until the very last possible second.

He had three accidents that first week.

I contacted his teacher and the principal. What happened to the faculty bathroom right outside the classroom door, which they’d assured me was available and he would be able to use? “We’ll start letting him use it right away," they told me. "We don’t want him to have any accidents.” But the damage had already been done. It was done when he was made to dash across the school to reach an appropriate toilet that he was permitted to use. It was done when he was pulled out of the bathroom line to stand by himself, apart from his peers and his classmates, waiting for them to finish. It was done when I didn’t speak up sooner or advocate more fiercely or insist, from the start, that he have full and unrestricted access to the boys’ bathroom, like every other boy did.

The longer my son was forced to endure that discrimination, the more he dreaded going to school every day, the more often his stomach would hurt, the less he participated in class and with his peers. And he was only 6 years old. How could he possibly survive the next 12 years of school? So I made the only decision I thought I could: I homeschooled him. It was the right decision for us, and the best decision we could have made. His stomach stopped hurting, he began to enjoy learning again, he was free to be himself.

But now, two years later, he’s ready to return. He’s finally comfortable enough and confident enough, in both himself and in me as his advocate, to attend a public school. He wants to be around children his age, he wants to participate in all of the many activities that we’re simply not able to do in a classroom of one. We took the steps to enroll him at the beginning of this month. I contacted the school to find out their policies; I sent over his paperwork; I even had him tested to we could see where he placed.

Then the 45 President of the United States demanded that the newly appointed Secretary of Education, a woman who certainly has earned no points with the vast majority of America, step down on her position to protect trans youth in public schools on a federal level. Then he allowed his newly appointed Attorney General to reverse the Obama-era guidance on equal treatment of trans students and protection from gender discrimination under Title IX of the Education Act of 1972, which means it’s up to the states to decide. If my son and I are lucky enough to live in one of the 12 states that prohibit discrimination based on gender identity, which we do, we're OK. For now. But if we find ourselves in the majority of states that don’t have protections for trans students, schools no longer have to allow my son free and unrestricted access in the boys’ bathroom. Instead, they will force him into the girls’ bathroom, or segregate and "other" him.

Using the bathroom is, literally, the most basic function a person can do, besides breathing. Being able to use a bathroom that you feel comfortable and safe in, publicly, is one of our privileges as United States citizens. For all citizens, not just white Christian cisgender heterosexual ones.

I’m scared to let him go to school now. I’m scared because what if the protections at a state level go away too? What if he’s put into a position again of being discriminated and segregated and exposed, and I have no grounds to help him? What about parents who don’t support their trans children? There are far too many trans youth who are doing this alone, without anyone to advocate for them at all, who heard the position of the new presidential administration and considered taking their own lives. To those amazing children, I wish I could say, you are not alone. Because you are absolutely not alone, and you have so many parents waiting to love and support you.

What about trans youth of color or Muslim trans youth or immigrant trans youth? They exist too, and they were already scared for their safety under this new administration. Now they meet even more criteria for being targets, not just politically or legally, but socially. Can you imagine how they feel?

If I’m scared, how must so many other people feel right now? Isolated. Targeted. Abandoned. Alone.

The federal government should be protecting our privileges and our rights, the rights of all Americans, not just those we deem acceptable. Section one of the 14 Amendment of the Bill of Rights guarantees that no state “…shall make or enforce any law which shall abridge the privileges or immunities of citizens of the United States." Using the bathroom is, literally, the most basic function a person can do, besides breathing. Being able to use a bathroom that you feel comfortable and safe in, publicly, is one of our privileges as United States citizens. For all citizens, not just white Christian cisgender heterosexual ones.

Is this what America is about? Driving wedges between groups of people, marginalizing populations, preying on the weakest and the least capable of defending themselves?

I assured him that I would not back down, not for any reason. That I would support him and advocate for him and demand that he be treated the same as every other child in his school. That I would advocate not just for him, but for any child who was being discriminated against, for whatever the reason. Because I don’t believe in dividing all of us up into neat little packages that can be driven out of public places, out of schools and jobs, out of the lives of “true Americans."

I considered withdrawing my child’s application to public school. I sat him down and talked about all the potential issues that might arise. I explained that our president withdrew federal protections for transgender students, which means that the states get to decide on the issue of transgender students' protections for themselves. That was OK, my son insisted, because Illinois was safe state, right? For now, I told him. I added that our state protects children from being discriminated against based on gender identity, and reminded him that the Illinois State Board of Education adopted a policy on bathroom usage, which unfortunately often leaves it up to the discretion of a district, which means a district could refuse him access to bathrooms and locker rooms, but as far as we knew, our district wouldn't. And if it did, we had options: return to home schooling, if that's what he wanted, or stand up and fight for his rights.

Then I assured him that I would not back down, not for any reason. That I would support him and advocate for him and demand that he be treated the same as every other child in his school. That I would advocate not just for him, but for any child who was being discriminated against, for whatever the reason. Because I don’t believe in dividing all of us up into neat little packages that can be driven out of public places, out of schools and jobs, out of the lives of “true Americans." And I wish that more parents would speak up, parents of white children and children of color, parents of trans kids and gay kids and most importantly, heterosexual cisgender children. Christian parents and Muslim parents and atheist parents.

Because if they can pull my child out of the bathroom line and make him stand by the side and watch his peers enjoy a privilege he can’t, what’s to stop them from doing it to your child next?