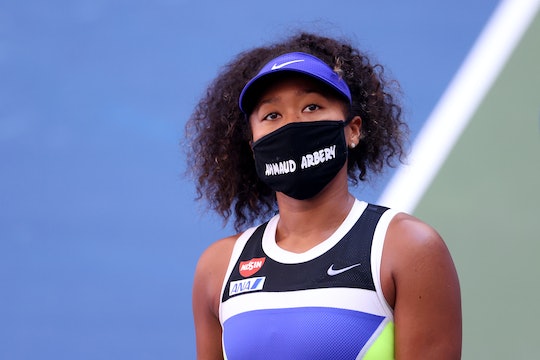 The 22-year-old tennis player from Japan has been wearing face masks with the names of the Black victims of racial injustice, The Guardian reported — Ahmaud Arbery, Trayvon Martin, George Floyd, Elijah McClain, and Breonna Taylor — to each of her matches during this tournament. On Tuesday night, after winning her quarterfinal match, Osaka received a personal message from Arbery's father, Marcus Arbery Sr. and Martin's mom, Sybrina Fulton, thanking her for saying their son's names.

"I just want to say thank you to Naomi Osaka for representing Trayvon Martin on your customized mask, and also for Ahmaud Arbery and Breonna Taylor," Fulton said in a video. "We thank you from the bottom of our hearts. Continue to do well, continue to kick butt at the U.S. Open."

Arbery's father also thanked the tennis player for her support. "God bless you for what you're doing and supporting our family with my son," he said. "My family really, really appreciates and God bless you."

Fulton's son was just 17 years old when he was fatally shot while walking home from a convenience store in Florida in 2012, according to CNN. Arbery, a 25-year-old unarmed Black man who was jogging, was shot and killed by three white men in February, according to the New York Times. The men were arrested three months later and charged with murder. Osaka tweeted that she was "a kid" when Martin died and remembers feeling scared. "I know his death wasn't the first but for me it was the one that opened my eyes to what was going on," she said.

The tennis player will head into her semi-final match tonight, likely wearing another face mask bearing tribute to another life lost because of racial injustice.

Osaka said in a press conference that these responses from Fulton and Arbery mean "a lot" to her. "I'm not sure what I would be able to do if I was in their position, but I feel like I'm a vessel at this point, in order to spread awareness," she said. "It's not going to dull the pain, but hopefully I can help with anything that they need."

She tweeted that same day that she was doing her best to keep her composure during the press conference after seeing their responses. "I often wonder if what I'm doing is resonating and reaching as many people as I hope," she wrote. "The strength and the character both of these parents have is beyond me."

This isn't the first time that she has used her platform in a big way. Last month, Osaka withdrew from the semifinal round of the Western & Southern Open as a protest against police brutality. "Before I am an athlete, I am a Black woman," she tweeted.

"And as a Black woman I feel as though there are much more important matters at hand that need immediate attention, rather than watching me play tennis."