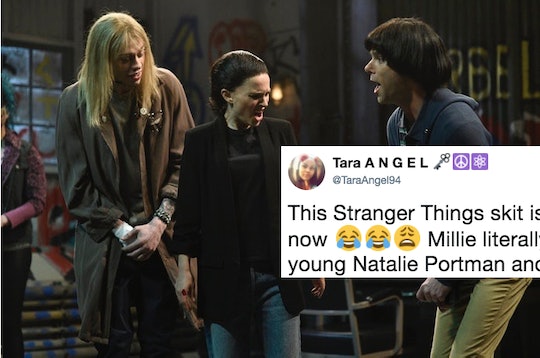 If you hadn't already noticed, Stranger Things' Millie Bobbie Brown bears a striking resemblance to actress Natalie Portman, which Saturday Night Live totally took advantage for a hilarious sketch this weekend about the upcoming season of the Netflix hit. It's absolutely ridiculous, but Natalie Portman as Eleven on SNL's Stranger Things parody might even have you petitioning to play her big sister or sub in for the 13-year-old star now and again.

The sketch was not one of SNL's best, but it does point out some of the more ridiculous things about the hit Netflix show, like how Mike really crushes a little too hard on Eleven, especially since she has some serious stuff going on in her life. And that it's kind of ridiculous that she has to have a nosebleed every time she uses her superpower. Why can't she just use her brain to move objects and communicate with people in the Upside Down without having to hurt herself? In the sketch, Eleven is meeting other people like her who also have some, well...issues...when they use their powers.

Cecily Strong plays Nine, who can read minds, but it makes her fart. Pete Davidson plays Five, who can run really fast, except he gets an erection. Beck Bennett, who plays Fourteen, says, "I can start fires with my mind but in makes me throw up in my mind a little."

Another one, played by Luke Null, makes a killer chili but has a brain bleed when he does it. And Aidy Bryant's superpower is that she can do a great impression of Sasha Baron Cohen before going into a coma, which is not just a totally useless superpower, but also really odd, since Stranger Things is set in the 1980s and Cohen didn't start making movies until the early aughts. But we'll let that discrepancy slide for now.

The sketch ended with Leslie Jones coming on to say that she was Fifty. When asked what her power is, she responds, "I'm just 50 years old, I have good credit, and I own my own home and I can leg press 375 pounds." Which is hilarious, especially if you follow the comedian on Instagram, where she posts her gym videos on the daily. And leg day is always the hardest.

To end to sketch, Kenan Thompson shows up, bragging about his power to know "when to end sketches," which is actually one of the things that the SNL writers rely on him for, according to a profile of the comedian by HuffPost. This sketch was pretty hilarious on all sorts of levels, whether it was that the writers used Twitter to cast Portman as Eleven, the low-key snark about the show and the "superpowers," and then bringing in Jones and Thompson to make inside jokes about themselves and the show to really up the bizarre level.

Portman had a handful of good sketches last night, including one in which she channels her inner Cardi B. The first time she was on the show, in 2006, Portman did a rap, so this was another Easter Egg for true SNL diehards. They even brought back Andy Samberg to help her out on the track. She modified some lines from "Bodak Yellow" for her tune, rapping about giving birth:

I don’t dance now, I make mommy moves. When I gave birth, I didn’t even push, I was blazed out, smoking bomb kush. And when my water broke, you know it drowned the doctor.

At the end of the song, she puts a Time's Up sticker on a reporter's forehead and then pushes him out the window, which is timely, if nothing else.

Casting Portman as Eleven definitely pleased Twitter. I just really hope the showrunners don't take any of the SNL writers' ideas for the third season.