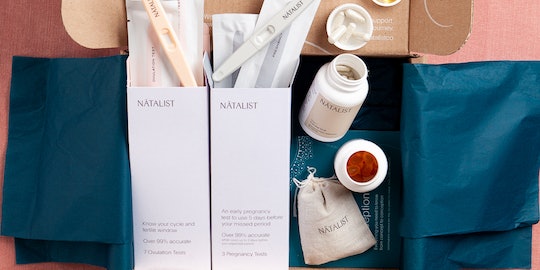 If You're TTC, Check Out Natalist's "Get Pregnant Bundle" Subscription Box

Natalist is a start-up company that focuses on women’s fertility, who, according to their website, offers, “Doctor-recommended essentials to help you get pregnant.” The new “Get Pregnant Bundle,” a box of resources for women who are trying to become pregnant, looks pretty appealing for the TTC set. But whenever a bundle of products is offered, it’s always important to consider the value of each item contained within... so what’s in Natalist's “Get Pregnant Bundle,” and is it worth it?

The bundle can be ordered from the Natalist website at natalist.com, either as a one time purchase at $90, or as a monthly subscription at $81. The box is delivered to you, and shipping is free. As the Natalist press release states, “They are launching with fertility products which have been rigorously researched, built, and tested by a science and medical team. The aim is to offer everything you need to get pregnant — and nothing you don't.”

Inside the bundle are vitamins, ovulation and pregnancy tests, and informational reading material. The vitamins include a month’s supply of prenatal multivitamins, and a month’s supply of Omega DHA. Natalist states that the ingredients in these vitamins “meet or exceed American College of Obstetricians and Gynecologists (ACOG) guidelines.” The box also includes seven ovulation tests, which are meant to help you keep track of when you are most fertile. There are three pregnancy tests, that Natalist says gives results five days before your period is supposed to start. Included also is a Conception 101 book published by Natalist, a 64-paged book that focuses on, “the biological basics on how to get pregnant.”

Are the items in the “Get Pregnant Bundle” helpful for pregnancy? The prenatal vitamins that are included are, in fact, often recommended for women who are trying to get pregnant. Planned Parenthood suggested that women start taking prenatal vitamins one month before attempting pregnancy. (It’s also a good idea to inform your doctor or OB-GYN of the supplements you're planning on taking.) Also included in the Get Pregnant Bundle is Omega-3 DHA, "thought to prevent certain health problems associated with pregnancy, such as preeclampsia," according to Verywell Family.

The other items included in the bundle seem similarly helpful: ovulation tests can let you know when is the best time to attempt conception. Though not strictly necessary, they can be a big help in figuring out when you are most likely to successfully conceive. The Conception 101 book may also be helpful in demystifying the science behind conception, or it could simply be interesting knowledge to have. The pregnancy tests in the bundle are vital: It’s important to know when you get pregnant so you can inform your OBGYN and start care. It’s also, of course, the news you’ve been waiting for!

The kit included in the Get Pregnant Bundle do appear genuinely helpful, but is it worth the cost? To find this out, I’m going to break down each item and compare it to the cost of buying it from the drugstore. First, the month supply of multivitamins: a store bought version of one month’s supply (including Omega-3 DHA) is about $27. (However, it's a lower does of the Omega-3 DHA & EPA (200mg & 35mg), whereas Natalist’s Omega DHA vitamins contain a higher dose (450mg & 150mg).) A similar dose of Omega DHA vitamins is about $19 at Target. Three pregnancy tests are about $13, and 7 ovulation tests are around $17. Bought separately, the Conception 101 book is $15.

In total, buying drugstore versions (plus the book) would be about $91, plus or minus some amount of money taking into account the quality of the vitamins and deals at your local store. The monthly subscription of the Get Pregnant Bundle is $81, and the one-time purchase is $90. If you’re interested in Natalists’s Get Pregnant Bundle, it seems to be a pretty good deal: the items seem to be valued appropriately, plus you get the convenience of having everything delivered in one package to your home. The design of the packaging is also very pretty and minimalistic, which can help you feel less overwhelmed by the many details of trying to get pregnant. In sum, the Get Pregnant Bundle appears to be a great option for women who are on their pregnancy journey. Just be sure to clear any vitamin or supplement regimen with your doctor first.

More Like This
Yes, It’s Possible To Get Pregnant If You Have An IUD
The 35 Top Toys For 3-Year-Olds
The Bath & Body Works Candle Day Sale Is Here & It's *Good*
Spread Some Christmas Cheer In Your Child’s Bedroom