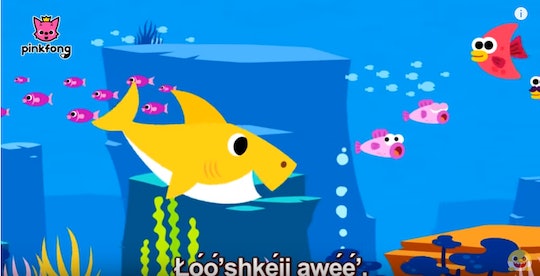 There are plenty of parents out there who probably feel like they never need to hear the song "Baby Shark" for the rest of their lives. I get it, the song is almost comically popular and appears to have serious staying power with little kids. But if you're a little kid, it's simply your jam and you just want to sing along, in your own language preferably. And now, the creators of the song have created a Navajo version of "Baby Shark" for indigenous kids who want to be able to participate in the craze, too.

South Korean company Pinkfong recently released a new version of their mega-hit song "Baby Shark," its 20th different language version of the song if you can believe it. Prior to this, the song had been translated into German, Chinese, Spanish, and 16 more languages. According to the Associated Press, Navajo Nation Museum director Manuelito Wheeler initially reached out to SmartStudy, the parent company behind Pinkfong, in an effort to attempt to translate the song into Navajo. The company agreed and went on to hold singing auditions in Window Rock, Arizona to sing the song in Navajo, according to KUTV, complete with a coach on hand to help with the translations and pronunciations.

Eventually singers were hired to perform the roles of Baby Shark, Mommy Shark, Daddy Shark, and Grandpa Shark and a new version of the song was created.

“Łóó’ Hashkéii Awéé" is the name of the song, which translated means "Navajo Baby Shark." As SmartStudy marketing manager Justin Yoon told the Associated Press, the impetus behind creating a Navajo version of the song was to encourage young Navajo people to become interested in learning the language. "The Navajo Nation Museum has advised and helped us through the whole localization process, and the translated lyrics have been supervised by Navajo language experts," Yoon told the news outlet.

And it seems to be working. Since the Navajo version of the song's release on Dec. 28 on YouTube, it has already been viewed more than 285,000 times and is getting positive reviews on Twitter. One social media user noted, "Happy that there is Navajo version of Baby Shark, the South Korean [creators] actually worked with the Navajo Museum in Window Rock Arizona!!!! I could legit cry."

This isn't the first time the Navajo Nation Museum has reached out to have popular programs translated into the Navajo language. Both Star Wars IV: A New Hope and Finding Nemo were dubbed in the Navajo tongue, according to The Hollywood Reporter, after the museum requested it.

The reality is that languages live on through pop culture. At this stage there are only around 150,000 people who speak Navajo, despite the fact that it is the most spoken Native American language, according to Native Languages. So what better way to keep the next generation speaking Navajo than delivering their favorite songs and movies in that language?