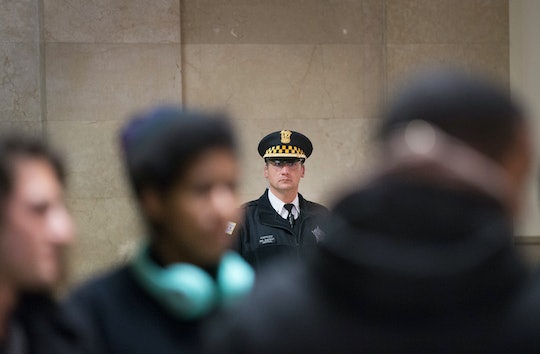 In a sobering year-long study by The Washington Post, disturbing new numbers and trends about civilian deaths at the hands of police shootings emerge: "Nearly a thousand times this year, an American police officer has shot and killed a civilian." Since the 2014 shooting of Michael Brown in Ferguson, Missouri, The Washington Post has compiled an extensive database of civilian fatalities by police shootings, based on "news reports, public records, Internet databases and original reporting." They've recorded 965 civilian fatalities from officer-involved shootings; this alarming number doesn't appear to include a number of police shootings that have left several more dead in the past few days, including Saturday's shooting deaths by Chicago Police of 19-year old Quintonio LeGrier and 55-year old Bettie Jones, a mother of five. Early Sunday morning, news outlets in Phoenix, Arizona began reporting that a Phoenix police officer shot a man dead for throwing rocks at police.

The Washington Post has been meticulous in their data collection, specifying that their numbers reflect only those civilians killed by on-duty police officers; civilians that die in police custody or killed by off-duty officers have not been included in their database. While the FBI is tasked with keeping track of officer-involved shooting statistics, a Post analysis of those statistics found that less than half of all police departments report these incidents to the FBI.

A Disturbing Lack of Data

While the FBI is supposed to collect data on civilian deaths at the hands of police, a Post analysis of FBI data found that less than half of the nation's police departments — approximately 18,000 total — report such incidents to the FBI. Meanwhile in the U.K., The Guardian has tallied more than 1,100 people killed by police so far this year. I'm not sure which is more concerning: That there is no reliable, centralized collection of police-related civilian deaths, or that the task of collecting such data has fallen on the shoulders of two newspapers.

While the Post found that black men accounted for a staggering 40 percent of unarmed men shot and killed by police this year, the fact that one person has been killed by police in every state in the United States this year speaks to a much more widespread problem among American law enforcement. This appears to be more than just a police public relations nightmare or a case of over-reporting by the media: The concept of "shoot-to-kill" seems to have become less of the exception and more a reflection of a systemic lack of thorough crisis intervention training among American law enforcement.

Time and time again we've heard the phrase "in fear for my life" by police officers who've shot unarmed civilians dead where they stand. But in the case of Laquan MacDonald — shot 16 times by Chicago Police Officer Jason Van Dyke — the decision to take the 17-year old's life, rather than subdue him with a Taser, was made within the first six seconds that Van Dyke arrived on the scene. Van Dyke has been charged with first-degree murder.

And let's not forget about 12-year old Tamir Rice of Cleveland, Ohio: The boy was shot twice by Officer Timothy Loehmann in November 2014. Rice was unarmed and had only a pellet gun. Neither Loehmann or the other responding police officer administered first aid to Rice following the shooting; it was only when a nearby FBI officer responded to the scene that paramedics were called. Rice would die of his wounds the next day. Loehmann contends that he warned Rice three times to drop his "weapon" — surveillance video of the incident shows that Loehmann discharged his weapon within two seconds of pulling up to the scene, contradicting that statement. A Grand Jury is currently deciding whether Loehmann's use of deadly force was justified.

When Is Enough, Enough?

As 2015 draws to a close, we're left with a wake of dead bodies piled nearly or just over 1,000 high — depending on which newspaper you subscribe to — each of those deaths at the wrong side of a police officer's gun barrel. This isn't a Second Amendment issue. This isn't a race issue. This is an issue about abuses of power and a disparate role of unchecked authority held by American law enforcement. Just as we as a nation asked in the wake of 20 dead children after the Sandy Hook Elementary School shooting: "When is enough, enough?" — so too, must we ask that again of ourselves, our legislators, and the people who are supposed to "protect and serve" the American people as they leave behind a list of dead civilians 1,000 names long this year alone.