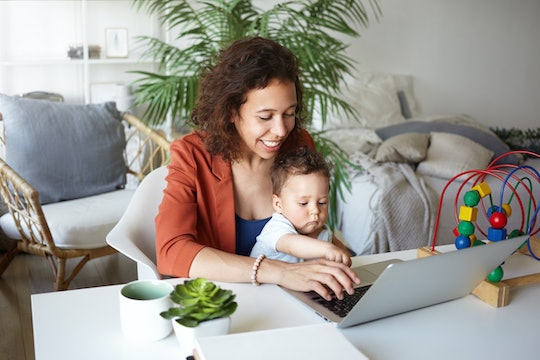 Nearly Half Of Millennials Have A Side Hustle Just To Pay The Bills, New Report Finds

Sometimes it gives me a nice little chuckle when I hear people talk about working 9-5 or getting super pumped because it's Friday. T.G.I.F. is such a quaint notion in 2019, as is the assumption that the whole world is working just that one day job and has weekends to themselves. It's like vintage aprons and suspenders for socks, a nice idea that doesn't really work for everyone anymore. Because despite the rumors that this generation is inherently lazy and under-motivated, a new report found that nearly half of millennials have a side hustle to make extra money. Some people out there even have several side hustles and are trying to raise children at the same time.

A new survey conducted by Bankrate found that 48 percent of people between the ages of 23 to 38 years old take part in what's also known as the "gig economy," earning extra money on the side of their regular full-time or part-time employment. These jobs tend to take up an average of 13 hours per week on top of their regular hours and earn an extra income of approximately $1,280 per month, which comes in pretty handy considering the skyrocketing price of living. For example, according to Business Insider, the average millennial spends around $200,000 on rent before purchasing a home.

No wonder they need a side hustle.

Bankrate's survey found that around 30 percent of people who have a side hustle are doing so just to make ends meet, with 40 percent of millennials admitting that they earn at least half of their income through extra gigs. Millennials tend to take on gigs in the tech industry at a far more frequent rate (around 84 percent) than their Gen-X and Baby Boomer counterparts, and I'm not even going to make a joke about that at all.

As Bankrate analyst Amanda Dixon explained of the survey's findings: "Though the economy is strong, many Americans are finding it necessary to work on the side in order to make ends meet. The good news is, whether you need to put in extra hours to pay the bills or pad your savings account, finding a side gig has never been easier."

While there are definitely people out there who are working side gigs to foster some sort of hobby or passion, that isn't always the case. Especially not for millennials, who the survey found were less likely to use their supplemental income for discretionary purposes than their older counterpart. Considering how many millennials are starting families (according to PEW Research, more than 1 million millennials become mothers every year), this gig economy could make for a massively over-worked, exhausted generation of parents.

Financial stress can affect the entire family, especially when coupled with the fact that parents are working more all the time. Which can be especially frustrating if you need to add child care costs into the equation and then you feel like you are working just to pay for child care... as someone who has been there I can tell you, having a side hustle when you're a parent is not for the faint of heart.

So the next time someone feels like pointing the finger of judgment at millennial parents, go ahead and try working two to three jobs simply to make ends meet while raising children and then get back to me.