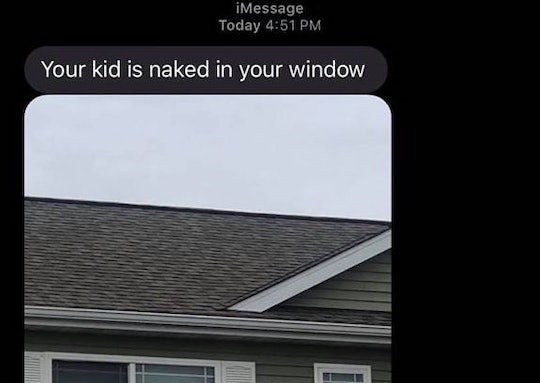 Mom's 2-Year-Old Had The Neighbor Laughing As He Waved, In The Buff, From The Window

Toddlers love to be naked, this is just one of those things you learn as a parent. Particularly once they figure out how to remove their own diaper when their parent's back is turned. Fortunately for some parents, they have people in their lives who are there to report on their nudist tendencies (not that there's anything wrong with that). Like one mom whose neighbor alerted her that her toddler was standing "naked in your window," as she shared in a viral Facebook post, and she just can't stop laughing about it. Because what else are you going to do?

Jeni Boysen tells Romper she was at home with her 2-year-old son Dax when she needed to jump in the shower. She explains that she put Peppa Pig on the television to keep her son occupied, also noting "he was wearing a diaper at the time." And when she came out five minutes later, "he was still sitting on my bed" like nothing had happened. Only it seems Dax made the most of those five minutes.

Later on, Boysen's neighbor Laura, who is also a friend, texted her a photo of her 2-year-old standing in the window naked as the day he was born with the message: "Your kid is naked in the window."

On Feb. 3, Boysen shared the text exchange on Facebook with the caption, "Ya know. Sometimes you think you’re doing okay at life and then you get a message like this from a neighbor. I just cried I laughed so hard. This is exactly the laughter I needed tonight."

Boysen's neighbor also apparently thought little Dax hanging out naked in the window was pretty hilarious. "When she first saw him he was waving at her," Boysen says, "she said she had a bad day and that it just made her laugh so much!"

Everyone on the internet is getting a good laugh out of this too, with Boysen's post shared over 138,000 times on Facebook. While Boysen tells Romper she's well aware that people can sometimes be pretty awful on the internet, in this case everyone seems to find the whole situation pretty relatable because it shows "the craziness of motherhood."

Certainly people are leaving comments to that effect. "Well this made me laugh anyway, hang in there Mom," one person commented, while another added, "LOL this is hilarious!! Sounds like something one of my boys would do!!!"

For anyone out there who might be concerned about Dax' free-spirited attitude towards public nudity, relax. As Today's Parent reported in 2018, it is incredibly common for kids that age to want to take their clothes off. There could be any number of reasons why a toddler strips down; they don't like their clothes, they're too hot, their diaper is bothering them. Or they just like being the boss of themselves for a minute. Or, in Dax's case, maybe they just want to make their neighbor laugh.