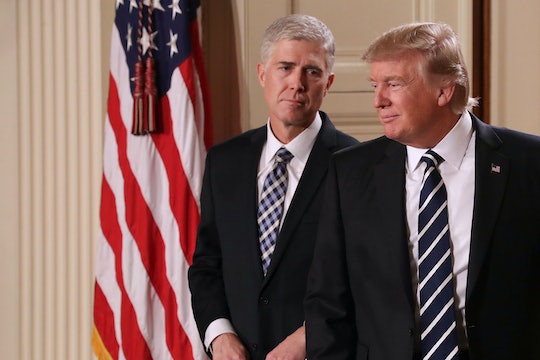 On Tuesday night, President Donald Trump nominated federal appeals court Judge Neil Gorsuch to fill the empty seat on the Supreme Court. If confirmed, Gorsuch will rule on a host of controversial issues, one of which seems likely to be Trump's recent executive order temporarily banning refugees from seven countries from entering the U.S. So what is Neil Gorsuch's stance on the temporary refugee ban? While he hasn't spoken much publicly on that particular issue, he's a justice in the mold of the late Justice Antonin Scalia, whose seat he's set to fill. That means he's likely to go conservative and please Trump.

The Washington Post featured a report by researchers who evaluated Trump's rumored picks for their "Scalia Index Score," or how Scalia-esque they were likely to be. Gorsuch scored much higher on the Scalia Index than Judge Thomas Michael Hardiman, whom Trump also summoned to the White House on Tuesday night in order to build suspense for his announcement. (Yes, if you're thinking Trump's Supreme Court announcement style sounds like an episode of The Bachelor, you are not alone.) FiveThirtyEight went so far as to refer to Gorsuch as a "Scalia clone." Scalia was an originalist (meaning he believed the Constitution was a fixed document rather than an evolving one), and so is Gorsuch. Scalia reliably ruled in a conservative manner and, in the past, Gorsuch has too.

When it comes to Gorsuch's stance on immigration, specifically, there aren't many clues in his judicial record. The one big immigration case he ruled on, Gutierrez-Brizuela v. Loretta Lynch, while on the 10th U.S. Circuit Court of Appeals, ended up ultimately being more about the separation of powers.

However, that in itself could provide a sliver of very, very tenuous hope for opponents of the ban. Gorsuch praised the founding fathers for the distribution of power they created, writing in his decision, "A government of diffused powers, they knew, is a government less capable of invading the liberties of the people." There did not seem to be much regard for the separation of powers in the way that Trump's executive order on the immigration ban was rolled out, and currently, some officials are reportedly ignoring court orders in continuing to enforce the ban. Again, though, tenuous.

Some also consider Trump's executive order to touch on religion, since it could be seen as discriminating against Muslims. Gorsuch has ruled on some religious cases, although almost all of them have involved Christianity —most notably, the Hobby Lobby case involving the corporation that did not want to pay for contraception for women under the Affordable Care Act because of religious objections. Gorsuch sided with Hobby Lobby.

So while it's impossible to say with total certainty what Gorsuch would do in the face of a challenge to Trump's temporary refugee ban, it seems pretty likely that his nomination is not a great thing for liberals hoping for a swift end to Trump's order.