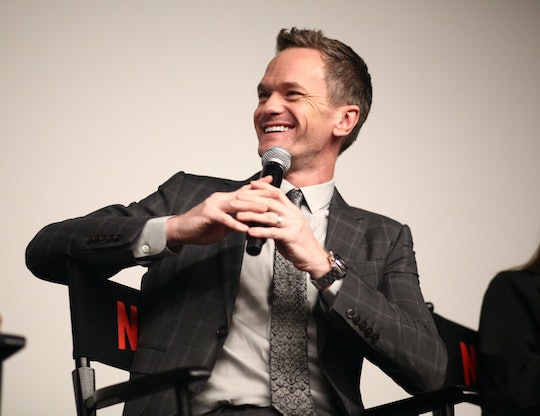 It will be hard to top dressing up his daughter as a ghost bride with a bloody ax. Such is the challenge facing Neil Patrick Harris, whose family Halloween costumes with husband David Burtka, and kids, twins Harper Grace and Gideon Scott, have become "a bit of a thing," as Harris puts it to Romper.

“That wasn’t its intention,” Harris says of the family’s tradition. “We thought it was just fun to Instagram a picture of our family and our Halloween costumes.”

From Peter Pan to Batman to Alice in Wonderland, they have managed to coordinate characters and costumes since 2011, raising expectations year after year, raising the question: What will they do this year?

At the time of our conversation, Harris and I are sitting in the back of a large black van on 8th Avenue in Manhattan. It’s not a typical interview space, but Harris makes the most of it, welcoming me into the luxury van with a level of comfort that makes me feel as if he’s inviting me into his home. “This is strange for a lot of people,” Harris says, referring to the dozens of people passing by us without the slightest idea who we are or what we’re doing.

Just a few feet in front of what I will now refer to as the NPH-mobile is a Quaker Chewy food truck. Before joining me for a chat, Harris was inside the food truck passing out reusable lunch bags to parents and children ahead of the new school year.

Harris’ 8-year-old twins are back in school now, which Harris admits he is pretty excited about, and he’s more than happy to chat about how his family is transitioning back into a regular schedule. “I love homework and I love seeing what they're learning and their process of learning and reexperiencing education through their eyes,” he tells me, sharing the twins are now officially third graders.

But even with school back in session, the Burtka-Harris family hasn’t put a lot of thought into their annual Halloween family costumes just yet.

“We don’t have anything set yet,” he says. “Much to my husband’s chagrin.”

“Last year they let me do the Disney's Haunted Mansion as the theme, because I'm obsessed with the Haunted Mansion,” Harris says, referring to the bride with bloody ax (Harper), and array of ghosts (Harris, Burtka, and Gideon). “But I was Photoshopping, you know, images of the hatbox ghost in the background, and I was adding layers — I loved doing it, but it turned into more of a thing of art, like a two-dimensional art collage, than it was just us in Halloween costumes.”

What can I say, the man is an auteur.

Unfortunately for Harris, it sounds like living up to their own costume hype every year might just be taking the fun out of it all. In order to take control back of their family fun, Harris says they “might just go simpler this year. Take it down a notch. So it’s not turning into George Lucas.”

Somehow, I don’t believe him. Halloween is Neil Patrick Harris’ world, and we’re just living in it.