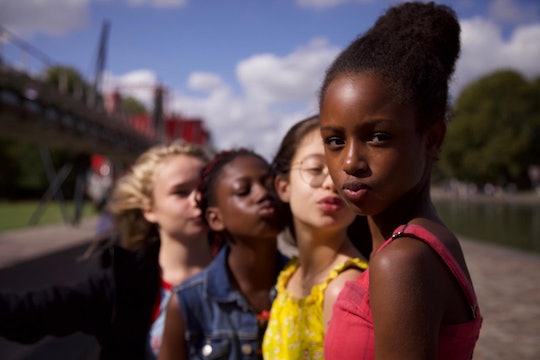 After a recent spate of backlash, Netflix has apologized for a promotional poster for Cuties, noting in a tweet that the company is "deeply sorry for the inappropriate artwork that we used" to market the award-winning French film. The image as well as the film's description on Netflix sparked thousands to sign a petition, which criticized the streaming giant and the movie as sexualizing young girls.

Netflix purchased the French film Mignonnes (translated to Cuties for the American release) for streaming starting on Sept. 9. The film was written and directed by Maïmouna Doucouré and is partly based on her life growing up in a conservative family. The movie follows the story of Amy, an 11-year-old girl originally from Senegal who meets a dance troupe called the "Cuties" and becomes fascinated with a new way of looking at the world.

The film won the Directing Jury Award at the 2020 Sundance Film Festival, where it was nominated for best film, and has received an 82% approval rating on Rotten Tomatoes. But all of those accolades have been eclipsed after people saw the poster Netflix used to promote the film, which featured young girls twerking in dance uniforms. The original Netflix description of the film was also considered problematic: "Amy, 11, becomes fascinated with a twerking dance crew. Hoping to join them, she starts to explore her femininity, defying her family's traditions."

The new description on Netflix now reads: "Eleven-year-old Amy starts to rebel against her conservative family’s traditions when she becomes fascinated with a free-spirited dance crew."

The backlash was severe, so much so that a petition was started on Change.org demanding the removal of not just the poster and description, but also the film from Netflix. "This movie/show is disgusting as it sexualizes an ELEVEN year old for the viewing pleasure of pedophiles and also negatively influences our children!" the petition reads. "There is no need for this kind of content in that age group, especially when sex trafficking and pedophilia are so rampant! There is no excuse, this is dangerous content!"

The petition's author wrote in an update that although Netflix has made edits to the description and updated the image, she still wants the film pulled, writing, "I declare this film to be removed in Jesus name!!"

After the petition went viral, Netflix issued a formal apology on Twitter. "We're deeply sorry for the inappropriate artwork that we used for Mignonnes/Cuties. It was not OK, nor was it representative of this French film which won an award at Sundance. We’ve now updated the pictures and description," Netflix wrote.

While the petition had received over 191,000 signatures as of Friday afternoon, many have defended the film and specifically criticized Netflix's marketing choices. For instance, journalist Beth Elderkin shared side-by-side comparisons of promotional posters for the same film — left released by Bien Ou Bien Productions in France, right released by Netflix — and the difference was glaring.

The issue many people are taking with the marketing with this film is what Nicole Cardoza from Anti-Racism Daily calls "adultification" of Black girls, which can be traced back to the days of slavery, and how it took focus from what the film actually is about. "In the midst of a national reckoning on racial justice, it feels especially insidious that Netflix would choose a cover that strips the characters of the youthful rebellion in the original poster," Cardoza wrote.

In an interview CineEuropa, Doucouré said the film is meant to address how society sexualizes women and the ripple effect it has on young girls. "Today, the sexier and the more objectified a woman is, the more value she has in the eyes of social media," she told CineEuropa. "And when you’re 11, you don’t really understand all these mechanisms, but you tend to mimic, to do the same thing as others in order to get a similar result. I think it is urgent that we talk about it, that a debate be had on the subject."

Actress Tessa Thompson wrote on Twitter that she had seen the film and loved it, but was "disappointed to see the current discourse" about it. "#CUTIES is a beautiful film. It gutted me at @sundancefest," she tweeted. "It introduces a fresh voice at the helm. She’s a French Senegalese Black woman mining her experiences. The film comments on the hyper-sexualization of preadolescent girls. Disappointed to see the current discourse."