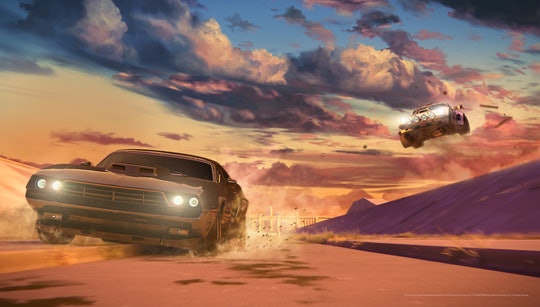 Sometimes I'm sad my kids are big and grown up, on account of all the sweet new cartoons they're missing out on nowadays. I mean, I assume they still secretly watch most of them but still... it was nice when they were little and we could all legitimately indulge our penchant for animated series. I'm especially sad for my boys now that Netflix's new animated series Fast & Furious: Spy Racers is going to come out. Because of all the racing and the spies and such, they would just love it.

DreamWorks Animation made some big announcements at the Annecy International Animated Film Festival in Annecy, France this week. The studio has a number of new shows coming out in the near future, and one of those is a new series to be released on Netflix called Fast & Furious: Spy Racers based on the popular live-action movies of the same name.

The story will focus on Tony Toretto, a teen cousin of Vin Diesel's character Dom Toretto, who has been recruited as a spy (hence the name) to go undercover and investigate a secret racing league. This racing league, coincidentally, is only serving as a front for a crime organization with nefarious plans for world domination so don't feel too bad for them please.

Here's a short little trailer to get your engines revving and puns are great.

In case you were worried that this new series might not have the street cred of the massive film franchise, calm down. Vin Diesel himself, the original star of the series, is acting as a producer and I think we can all agree that he can be trusted to protect the legacy of the brand that made him a household name.

Chris Morgan, who served as producer for the original Fast & Furious franchise, is also on board as a producer for the animated series for Netflix. Morgan and Diesel will be working with Tim Hedrick (Voltron Legendary Defender) and Bret Haaland (All Hail King Julien), who will both serve as executive producers and showrunners.

The new series is expected to premiere on Netflix across the globe later this year, although a firm launch date has yet to be announced.

At this point, it's difficult to tell whether or not the new animated series Fast & Furious: Spy Racers will follow closely along with the original series. After all, the original series was made for a rather more mature audience, with most of the eight films hovering right around that PG-13 rating. So if you have a little one in the house who is super car-obsessed and you think they would really love the series, you might want to go ahead and check it out on your own first. The whole spy infiltrating the world of crime via sweet racing scenes might not work for really small and very young kids. But for older kids and adults? I have a feeling Fast & Furious is simply never going to go away.