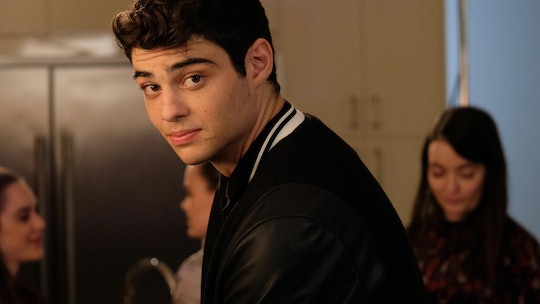 I see you, Netflix. As fans patiently wait for the sequel for To All The Boys I've Loved Before, the streaming giant released the trailer for The Perfect Date, a new movie featuring Noah Centineo, a young Mark Ruffalo and the internet's latest heartthrob. The film boasts a star-studded cast that almost every Gen Z'er will probably recognize, including Riverdale's Camilla Mendes and Austin & Ally's Laura Marano. And TBH, I'm so here for it.

In The Perfect Date, premiering on Netflix April 12, Centineo plays Brooks Rattigan, a high school student who wants to go to Yale University. But, like other kids who don't have rich grandparents to help pay for their Ivy League tuition like a certain Miss Rory Gilmore, Brooks needs to find a way to make himself some cash. So, he creates an app called "The Stand In" that pays him to be the perfect stand-in boyfriend, depending on the preferences of who is paying.

“I’m offering my services as a chaperone for whatever it is that girls want,” Centineo as Brooks says in The Perfect Date trailer. “Every date would be custom built. They can pick my personality, my interests, whether I’m a listener or a talker."

So basically, what fans are getting is a fun build-your-own-Noah-Centineo adventure, right? But, as we all know when it comes to romantic comedies, somebody catches feelings.

In the trailer, it's clear that Brooks wants three things to make himself complete: to date the most popular girl, drive the nicest car, and go to the fanciest school. Essentially, Brooks is caught up in a fantasy of what life should be like.

However, it looks like Brooks starts to fall for Celia Lieberman, played by Marano, who just so happens to be the one who inspired The Stand In app. But, in doing so, Brooks starts to discover that his image of what his life should look like isn't what he wants it to be. And according to Netflix's official synopsis, "Brooks must reassess everything he was once sure of."

Although Brooks' life changes when he becomes "the perfect date", his many dating escapades aren't the only thing at the center of the story. In an interview with Indiewire, Centineo revealed that the story told in The Perfect Date will illustrate themes that go beyond a typical romantic comedy, explaining that his character's motivation stems from being part of a low-income household and his drive to go to the university of his dreams.

“I just finished a film called [The Perfect Date] with Awesomeness production, the same company that did To All The Boys I’ve Loved Before that’s really endearing,” Centineo told Indiewire. “It’s about a young man who’s very enterprising and comes from a low income household, and decides to create an app that allows anyone to hire him for a stand-in date. He does this in the hopes of making enough money to get into his dream college, and then hopefully learn who he is in the process.”

Regardless of what happens, The Perfect Date looks like the perfect excuse to stay in on a Friday night. Will you be watching?

The Perfect Date premieres on Netflix on Friday, April 12.