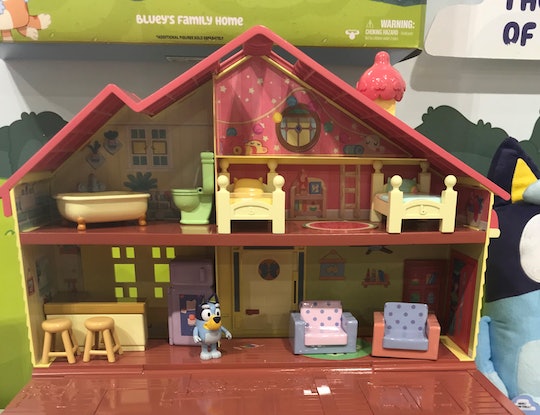 Little fans of the cartoon Bluey: prepare to get super excited and wag your bum in much the same manner as your favorite blue pup, because all kinds of cute toys featuring this frisky, friendly dog family will soon be hitting American toy stores. The Australian toy company Moose Toys is unveiling a whole line of new Bluey toys, and let's just say you should clear a space in the playroom for Bluey's Family Home playhouse now.

If you're out there wondering who-ey the heck is Bluey, well, allow me to explain. Bluey is a BBC cartoon that is wildly popular in Australia, and now (thanks to its appearance on Disney+ and Disney Jr.) is gaining popularity in the States.

It's a very sweet little show that follows the every day adventures of a Blue Heller pup named Bluey (obviously), an imaginative 6 year-old dog. Bluey lives in Brisbane with her father Bandit (a dog archaeologist) and mother Chilli (who has recently gone back to work at her job at dog airport security). Bluey also has a 4-year-old little sister named Bingo, who is quiet and on the shy side.

The show's simplicity, cute accents, and focus on family give it a very Peppa Pig vibe. Unsurprisingly, littles ones love it. Parents also really dig it, with some moms raving about how nice it is to watch a show with their kids that offers such positive messages on sharing, friendship, and familial relationships, but that also doesn't drive the adults slightly bananas, reported USA Today. (We're not mentioning any names, but... you know who you are.)

While the new Bluey toys won't be available for purchase in the U.S. until later this year (the planned launch date is August 1, 2020), they're currently on display at the New York Toy Fair, so Romper got a little sneak peek. Like the show, the stuff is both simple and sweet, with a focus on every day family activities.

There are little figurines of the whole family, as well as figures of supporting characters like Coco the pink poodle, Bluey's cousin Socks, and Honey, a glasses-wearing beagle.

There's a totally adorable playhouse, filled with little polka dot chairs, bed, a teeny bath, and even a stylish green potty. There's also a little swing set, featuring a slide and swings for Bluey and his buds to play on.

Or if Bluey is in the mood for a family barbecue, there's a tiny grill, chef's hat, a little picnic table... even a little spatula for flipping the food!

And if the family should run out of shrimp for the barbie? Well, no worries, they can just hop on into the family car and head to the shop. (And because this is Australia, the family car of course has a rack on top for surfboards.)

So tell your little ones to get ready — they'll soon have Blueys of their very own that they may lose in the sandbox and cover in GoGo squeeZ goo. As Bluey herself might say — for real life!