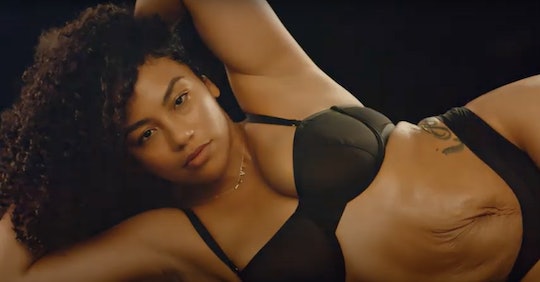 Unrealistic body expectations have been promoted in media and advertisements for years and years and years. And they still are, without a doubt, but one brand's new ad campaign celebrating postpartum bodies and finally recognizing them as sexy is so gosh darn refreshing to see.

In honor of National Nude Day — yes, it's real national holiday and there are many ways to celebrate — True Botanicals released a sensual new ad campaign called "Love Yourself, Gorgeous Mama" with an honest look at postpartum bodies that the company hopes will "encourage self-love with an affirming ode to the beauty of post-baby bodies."

For the campaign, the luxury skincare and beauty brand partnered with life coach, blogger, trainer, and mother of three (twins and a baby daughter) Jasmin Steiner, whose Instagram page is full of posts about body positivity and her own postpartum journey. In a press release for the campaign, Steiner said she hopes fellow mothers "see themselves" in True Botanicals' new ad for the company's Calm Pure Radiance Oil.

"I want moms to see themselves in this ad and to know they are beautiful too and they deserve to be seen just as they are," Steiner said.

Beyond True Botanicals' new campaign, other companies like Mothercare and Frida Baby have also released ads that show a real look at motherhood. For instance, Frida Baby's ad for disposable postpartum underwear and perineal cooling pad liners was apparently too real; according to the company, the ad got rejected by ABC and the Oscars to air during the awards show in February. In 2020.

It's no surprise women feel unrepresented in media and advertisements. In fact, according to WARC, a 2019 study on perceptions of ads found that 23% of women felt "ashamed of their body" and 33% of both men and women said they think "ads set unrealistic expectations and put pressure on people."

Undoubtedly, it will take time to reverse findings like those, but a sexy and realistic ad featuring a mother of three, proudly displaying her stretched postpartum skin, can certainly help.