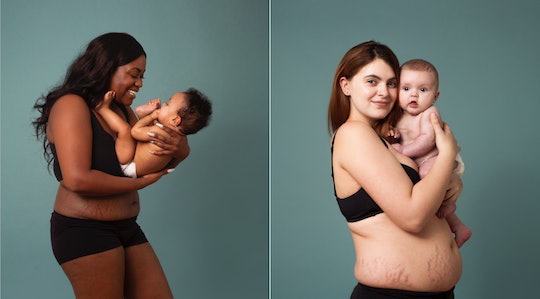 I remember the first time I really looked at myself after giving birth to my fourth son. It was an accident; I had been avoiding cameras and mirrors for the first week when I happened upon a surprise mirror in my mom's washroom. After taking a bath. In the nude. In that moment I didn't see myself as this powerful being who brought new life into the world, I just saw that I was wrong, all wrong. This happens all too often to women after they give birth, and there's a new campaign celebrating postpartum bodies that will hopefully help women, like myself, embrace everything they have accomplished by giving birth.

Parenting retailer Mothercare, based in the United Kingdom, recently commissioned research to get a better grasp on how women really view their bodies postpartum. Although we live in a world of increased body positivity and acceptance, does this actually help the individual or is it more of a sense of an overall shift in the group narrative? Sadly, it looks as though it's the latter.

Mothercare's research suggests, according to CNN, that a full 80 percent of new mothers in the United Kingdom are still comparing their bodies to those they see in the media, which is giving them unrealistic goals. Because of this, according to a press release, 51 percent of moms admit they use apps and filters on social media to change the way they look because they're unhappy with their appearance.

And Mothercare hopes to change all of that with a brilliant ad campaign featuring real postpartum bodies.

This campaign features 10 new moms and is called Body Proud Mums, or #BodyProudMums if you want to follow it on social media.

The aim is to highlight actual postpartum bodies and represent the reality of giving birth in a way that is almost never seen in the media.

Psychologist and author, Linda Papadopulous, noted that proper representation could go a long way in encouraging new moms to embrace the bodies they have.

"In the new media world that we live in our perceptions of how we think we should look may not be healthy, achievable or right for a particular individual," Papadopulous was quoted in Mothercare's press release. "This campaign hopes to reduce some of the pressures that new mums [may be] feeling by celebrating the body changes that come with motherhood rather than trying to edit them out."

Papadopulous added, "Very often, we end up showing compassion to others that we simply can’t show to ourselves when it comes to how we feel about our bodies."

Posters have been put up all over London, England on buses and in train stations, according to HuffPostUK, and it appears as though the campaign is already being met with loads of approval.

"I love #BodyProudMums@mothercareuk," one person tweeted on Wednesday. "Everytime [sic] I see the marks and scar in my body, It reminds me of the surgery and how I fight with the recovery. However, It also reminds me of the loves and the miracles."

Another said, "Can we take a moment to applaud @mothercareuk@mothercareirl for their #BodyProudMums campaign... Becoming a Mum is hard enough without feeling like you need to bounce back to your pre baby shape within weeks or months."

I think of the way I felt when I saw myself coming out of the tub, and I wonder how I would have felt if my newly changed body had been represented with any kind of honesty in the media. Maybe I would have understood that these changes were normal, that most women struggle with them, and that embracing the body you have is a powerful, beautiful thing. Sometimes all it takes is a little representation in the media to remind you of that fact.