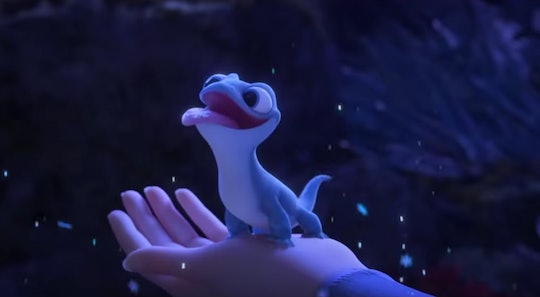 A Salamander, A Mystical Water Horse & More: Meet The New Characters In 'Frozen 2'

The highly anticipated sequel to Frozen — you know, the instant Disney classic that introduced us to Anna, Elsa, Olaf, Sven, and more — is finally hitting theaters everywhere Friday, Nov. 22. While the OG characters will still star in the movie, there are many new characters in Frozen 2 that will surely become your kid's newest obsession. (Ahem, an adorable salamander named Bruni makes an appearance, just sayin'...)

In Frozen 2, we'll find out more about why Elsa was born with frozen, magical powers, meaning there's more to learn about Anna and Elsa's parents, and we'll watch as the two go on a journey through the Enchanted Forest. Their journey is not only physical, it's also an emotional one filled with self discovery. But everyone knows that you can't go on an adventure without meeting a few new friends along the way, especially when Disney is the mastermind behind the movie.

Of course, Anna, Elsa, and Kristoff all return in Frozen 2, as well as the lovable snowman, Olaf, and Kristoff's trusty reindeer, Sven. But there are also some brand new characters (and creatures) who will make their way into the gates of Arendelle and beyond. Ahead of Frozen 2's premiere, here's everything you need to know about the movie's new crew: