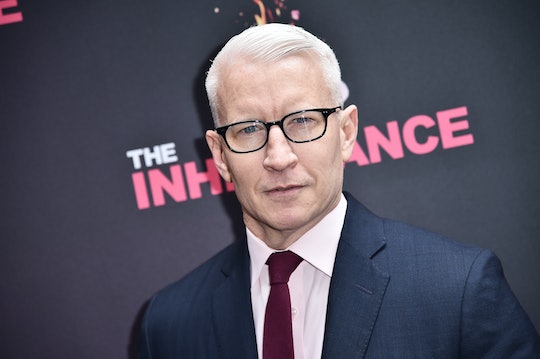 Becoming a parent for the first time brings out that protective instinct in most of us. And it seems like that's the case for new dad Anderson Cooper, who admitted that he's a little "obsessive" about watching his newborn son Wyatt on a baby monitor phone app. Hey, beyond the fact that sleeping babies are cute, keeping a constant eye on them is just very reassuring, particularly in those early weeks.

The CNN anchor welcomed his son, Wyatt Morgan Cooper, via surrogate on April 27, announcing the news in a sweet post on Instagram. "I want to share with you some joyful news. On Monday, I became a father. This is Wyatt Cooper," he captioned a photo of him with his new son. He also shared that little Wyatt "is sweet, and soft, and healthy." "I am beyond happy," he added.

Cooper went on to note in his announcement that "as a gay kid," he "never thought it would be possible to have a child." So now that he's a dad, he appears to be rejoicing in every moment with his baby boy — asleep or awake.

During a recent interview with Ellen DeGeneres, Cooper said he is "sort of blissfully happy" these days despite the pandemic. Or in some ways, because of the pandemic. DeGeneres pointed out that the coronavirus lockdown has allowed the new dad to be home with his baby "all the time now," and Cooper can't help but find their uninterrupted time together "amazing."

Even when Wyatt is sleeping, Cooper is transfixed by the fact that "he goes through a whole range of emotions on his face while he's sleeping." And in an effort to ensure he doesn't miss any of Wyatt's expressions as he sleeps, Cooper now has "a monitor where I can watch him on my phone, which is just obsessive."

Cooper isn't keeping all of that love for Wyatt for himself either; he told Howard Stern in a recent interview that he is co-parenting his baby with his ex-partner Benjamin Maisani because he believes "if something happens to me or even if something doesn't happen to me, the more people love my son and are in his life, I'm all for that."

It's possible that Anderson Cooper is the happiest, most blissful new dad out there these days. Obsessively watching his baby boy sleep and planning for the future. Pandemic or not.