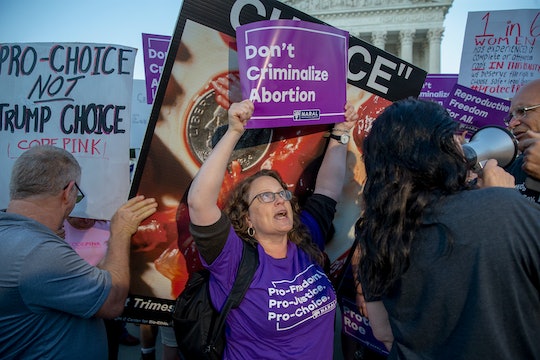 For most women, learning that you're pregnant doesn't happen until after the six-week mark. That happens for a variety reasons, including having to wait for your period to make an appearance that month. Yet, in an effort to restrict abortion access to the point of impossibility, GOP lawmakers in Ohio have introduced a new "fetal heartbeat" bill banning abortion in the first trimester, and this time it's closer to becoming law.

On Thursday, the Ohio House of Representatives passed legislation that would ban people from having an abortion once a fetal heartbeat is found, which can occur as early as six weeks of gestation, according to The Dayton Daily News. The "fetal heartbeat" bill, which passed on a 60-to-35 vote, now heads to the Ohio Senate, but whether or not the measure will move forward in that chamber is uncertain, The Dayton Daily News reported. However, given that the state Senate passed a similar bill back in 2016, the likelihood is high.

And if Ohio senators do pass the legislation, Republican Gov.-elect Mike DeWine, a staunch anti-abortion activist, has said that he would sign it into law, according to The Columbus Dispatch. DeWine will assume office on Jan. 14 of next year.

As a physician, I am disheartened that the Ohio legislature has decided to pass the six-week ban. This ban is broad and would affect all women in need of safe access to reproductive healthcare, including abortion. The patient-physician relationship is being destroyed by politicians who are part of larger movement to pass abortion restrictions that affect women and families everywhere. It is time for politicians to leave medical decisions to patients.

If Ohio's anti-abortion bill becomes law, it would criminalize abortion. A fetal heartbeat can be detected through a vaginal ultrasound as soon as six weeks into a pregnancy, according to Healthline. Around seven weeks gestation is when the heartbeat is better assessed via an abdominal ultrasound. That means the procedure would, in essence, become illegal in the state for most people. Although the bill's language allows exceptions for medical emergencies and life-threatening circumstances, doctors would perform abortions after detecting a fetal heartbeat could face felony charges and up to a year of prison time under the legislation, according to HuffPost.

Emily Bridges, director of communications for Advocates for Youth, called the anti-choice measure an "outrageous attack" on abortion services. Bridges tells Romper in an email:

Young people face barriers getting care in a timely manner-- including difficulty arranging for appointments and traveling to clinics. Worse, in Ohio, minors must get permission from a parent to have an abortion, and if their parent will not consent, they must seek permission from a judge. All these factors mean this ban will hurt young people. It is an outrageous attack on all people who need abortion care.

This is not the first time such an extreme bill has come before the Ohio legislature. Similar legislation failed in Ohio last year after outgoing Republican Gov. John Kasich vetoed the ban, stating that it would not live up to a constitutional challenge, according to Rewire.News. That's because federal courts have declared such bills unconstitutional.