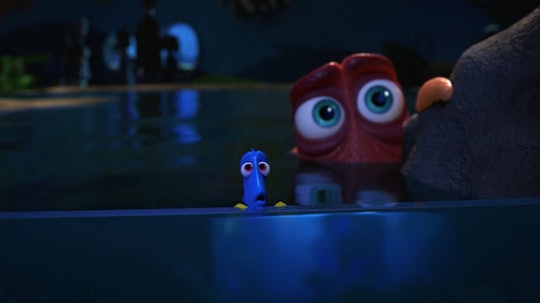 New 'Finding Dory' Trailer Will Give You All The Feels

I like to think of myself as a sidekick advocate. When I was a kid, I always liked the "best friend" character better than the main. I related, presumably, as an IRL "best friend" character myself, the unintentional comic relief. You know, that kooky friend who the audiences always sort of rolls their eyes at affectionately, those are the ones I truly love. And there are few sidekicks I have loved more than Dory, the ultra-positive blue tang fish with the short-term memory issues from Finding Nemo. I have missed her so... but not for much longer. There is a new Finding Dory trailer that will make you feel all the old feels for our favorite big-hearted sidekick.

What did we all learn from Dory, the breakout star of Finding Nemo in 2003? Well, we learned a whole lot about having a positive outlook on life, right? I mean her motto "Just keep swimming" might be the only ink I would ever consider, because it just makes so much sense. She's so right. Better yet, Dory was true to her word. No matter what sort of shenanigans she and Marlin got into while they looked for his son Nemo — nearly becoming food for a wayward great white shark, almost being blown up, nearly eaten again by seagulls — Dory was so positive. She just kept swimming.

Is this what we can expect from the new Disney/Pixar movie Finding Dory, due out in June? Well, the new trailer was released on The Ellen Show (Degeneres voices and also somehow embodies Dory) this Tuesday and offers a few clues as to the tone of the new movie.

Dory, it seems, lost her family as a young girl due to her short term memory loss. She's been looking for them ever since. And leave it to Disney/Pixar, the same people who brought you the beautiful full-length crying jags that were Up and Toy Story 3, to deliver the perpetually upbeat Dory's backstory with heart wrenching sadness.

Suddenly it's like we all realized... this little sidekick has her own backstory. She's been alone all her life. And now I need to crawl back into bed and cry for seven hours.

It won't be all tears, of course. The folks at Disney/Pixar (along with new characters voiced by Diane Keaton, Eugene Levy, and more) look to have created another movie with danger, laughs, adventures, and even a little lesson or two (Dory is captured at one point and taken to an ocean-themed park, where she meets new friends and reminds us that capturing animals and putting them in containers for us to look at is super not cool).

Directors Andrew Stanton and Angus MacLane will keep us laughing and crying in equal measures so that we become engaged on a level akin to physical pain. Because just hitting us with a heaping pile of sad wouldn't draw us in, not in the same way. They had to make a movie that would be visually stunning (if you didn't get a chance to see Finding Nemo on the big screen, sitting in the dark with the deep ocean all around you... you are in for a treat, my friend), engaging, sweet, and also just a little too sad.

It looks like it's time for our little sidekick Dory to get her own moment in the spotlight. And it's going to make us all emotional wrecks.