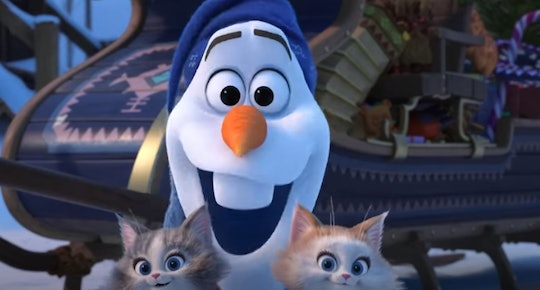 Who doesn't love a good back story? How about one about a goofy talking snowman voiced by the talented Josh Gad? Nobody, that's who, so surely all Disney fans will be pumped to hear that a new Frozen short about Olaf is coming to Disney+ next month.

Gad announced this week on Twitter that Disney will be releasing a new short based on Olaf, the hugely popular talking snowman from the Frozen franchise, called Once Upon A Snowman. The actor also confirmed the announcement in a guest hosting stint on Live! With Jimmy Kimmel, telling fans that the new short will premiere on the streaming network on Oct. 23.

Once Upon A Snowman will focus on Olaf's life before he was found by Anna and Kristoff in the forests of Arrendelle, as Gad shared on Twitter. "What exactly was Olaf doing before Anna and Kristoff found him? I’m so glad you asked!" Gad tweeted.

The new short is the brainchild of Olaf animation supervisor Trent Correy and Dan Abraham, who worked on Olaf's musical number "When I Am Older" from Frozen 2. "This is an idea that started to form when I was an animator on the first Frozen," Correy told UPI in a statement. "Dan Abraham and I are so grateful and excited to have had the opportunity to direct this short, working with our incredible colleagues at Walt Disney Animation Studios."

Olaf has become one of the most beloved characters from the Frozen franchise, which is saying something since both Frozen movies were such massive successes around the world. The snowman with the warm heart has already seen one of his own stand-alone movies, Olaf's Frozen Adventure from 2017, when he helps Princess Anna and Queen Elsa find their own holiday traditions in an attempt to save Christmas.

This new short will shed a little more light on the backstory of Olaf. Sure, we know Elsa accidentally gave Olaf life when she turned all of Arrendelle into a white wonderland, but what happened to him between "Let It Go" and meeting Kristoff and Anna for the first time? What was he doing with his days? Why is he so happy in pretty much every situation? These are all questions that should be answered when Once Upon A Snowman is released on Oct. 23 on Disney+. So obviously don't make any plans to "Build A Snowman." You're going to need to stay indoors to see how Olaf himself came to be built.